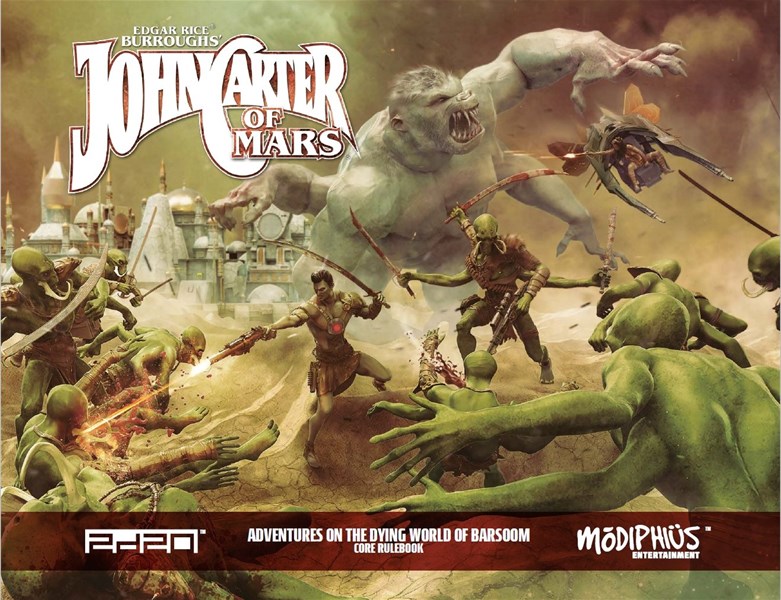 AKA- Edgar Rice Burroughs’ John Carter of Mars: Adventures on the Dying World of Barsoom

I’ve probably read more pulp literature than the average person, but not nearly as much as many other people I know. I grew up a voracious reader, but in a small town. Worse still, a small town before the internet was fully entrenched in the world. What that essentially means is that I had very little exposure to older books and characters. Tarzan was a notable exception because his story has always been easy (read: inexpensive) to transition into film and (eventually) television, at a time when “deepest darkest Africa” was still as alien to many people as Mars was. John Carter simply never crossed my path. To be completely honest, beyond A Princess of Mars, I still didn’t know much about his saga coming into this game.

I mention this, because it’s one of several figurative litmus tests I use, especially when dealing with a licenced game.

1- “Do the game mechanics/rules make sense without the IP?” (yes)

and the one I rarely use outside of an RPG:
3- “Does this game make me want to explore the source material?” (yes)

#1 becomes less relevant after a company have put out a few different games with the same system. Modiphius’ 2d20 System is solid, with understandable rules and the flexibility to run very different styles of RPGs. I previously reviewed Conan: Adventures in an Age Undreamed Of, and since our Paint Slinger featured the Klingon miniatures from Star Trek Adventures, I’m really hoping to dig into that in the future, to see how it handles 2d20.

#2 and #3 are closely linked in a roleplaying game. Whether the game is completely original or based on something already in existence, they both need to take the story material, explain it, and get me excited for it. John Carter of Mars definitely does that. Again, I only know the first of 11 books Burroughs wrote about Barsoom. So most of what is presented in the game was completely new to me. Since the books cover several decades of drastic societal change, the game splits this into three eras: The Dotar Sojat Era, The Prince of Helium Era, The Jeddak of Jeddaks Era. This allows some of the more important geopolitical details in the series to be integrated by the Narrator (the GM). While Narrators are encouraged not to copy the writing style of the books, having the entire chronological sandbox to play in adds an incredible depth to play.

The book itself is separated into four sections (plus introductions and indices). Unlike some games, the introductory matter in this is one is excellent reading. It’s not “required” reading, but the foreword and introduction to Burroughs’ work set a passionate tone that carries throughout the whole book.

The first section is dedicated to character creation, a process that is not particularly short in the 2d20 system. However, it is also not particularly difficult compared to other systems. Characters all start with an assumption of competency in anything they could justifiably do. From there, many of the statistical bonuses from Archetypes, Talents, etcetera, are more accurately situational bonuses. I love that there aren’t really any weird modifiers to one number based on another number, that you need to constantly cross-reference if something changes.

The second section is all about Adventuring in Barsoom. It gives the mechanics of the game, as well as how weapons and vehicles work, in terms of both story and mechanics. As far as mechanics go, the 2d20 system is one of the few times I think that custom dice make sense. A d20 is just a d20, but the d6 (combat dice) is different. Rolling 1/2 does damage, 3/4 does nothing, and 5/6 do damage, plus an extra effect. It’s not hard to remember all that, but it’s nice not to have to remember it yourself. The best quote I’ve come across to describe how 2d20 works is that it’s designed to create “interesting degrees of success punctuated with periodic instances of spectacular failure”

The third section is mostly your standard world-building, with extra attention to the Green Martian Hordes, the Red Martian Kingdoms, and the Okar (Yellow Martians). The First Born (Black Martians) and White Martians feature less prominently from a player standpoint, so are addressed in the Narrator Section. This section closes with a brief, but potentially important, chapter on adventures Beyond Barsoom. This chapter touches on the other planets throughout Burroughs’ work. Not just the aspects directly mentioned in the Barsoom series, but also things like Carson Napier’s adventures on Venus, and the prehistoric lost lands of Pellucidar, deep inside the hollow crust of Earth. Burroughs himself often referenced his other works, hence their inclusion, but this is not The Many Worlds of Edgar Rice Burroughs. Someday I hope to see that sourcebook, but for now, those are stories for another day.

The final section is mainly stuff for the Narrator. Some of it is completely irrelevant to players, some of it is ok if they know about it, but it could spoil some fun encounters with beasts or established characters from the books. Of course, the end should be totally off limits to them, with an introductory adventure, and ideas for after. But from a strictly Narrator standpoint, this section isn’t just charts and stats. It has one of the most well written sections on creating a consistent tone and them. It starts by defining the genres that John Carter stories exist in. “Rationalist Pulp” isn’t a common term in the current rawring twenties and “Planetary Romance” even less so. If most people saw a title like A Princess of Mars and were told it was a Planetary Romance, they would probably think it was just another Rebecca Silver bodice-ripper. But the literary definition of romance and the pop culture definition run pretty close to night and day. Sadly for you, I’m not going to tell you why or how; you can go look that up yourself.

As much as I love everywhere this game goes, it’s not without a few downsides. There were a few surprising typos, but the big annoyance is the layout. No, that’s not quite true, the layout is actually very good but the book is annoyingly printed in landscape orientation. That can make it a bit awkward to hold, and even more awkward to shelve. Modiphius did release a slipcase set of books, the slipcase giving the set a standard oriented “spine” for people like me who have a small library of RPGs. But, neither of those complaints takes anything away from the enjoyment of the game, so do they really matter in the end? Probably not. (But the use of Burrough’s not Burroughs’ does make me want to send them a copy of Bob the Angry Flower’s Guide to the Apostrophe.)

With the world in quarantine, now is the perfect time to take up a new game (online). Even if you aren’t sure you’ll want to PLAY John Carter of Mars, it’s well worth the investment to just free-read. (Yes, there really are people who read RPG books for leisure. It’s not weird. You’re weird. Shut up weirdo.) Once you’re done, odds are you’ll want more of the games and probably the original stories as well.