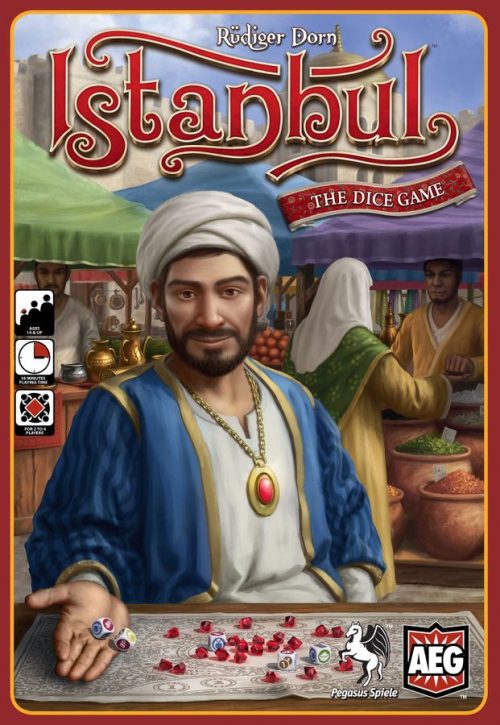 Every once in awhile, I end up with what I call a “cursed game”; a game that, no matter how much I try, just doesn’t get played. When I was given a sealed copy of Istanbul in June of 2019, I was actually quite excited. I loved the beautiful illustration on the box lid, the brightly coloured components (dice, markers, cards, coins and even two different kinds of “crystals”) and the appealing artwork on the double-sided game board. But whenever I tried to include it in my game sessions, there was always a reason not to play. We didn’t have enough table space, or we weren’t able to get through the whole instruction manual, or we were just suffering from game fatigue by the time we got around to it. And now that the “curse” is broken, all these excuses seem kind of silly. Properly organized, the board and components don’t really take that much space. The eight page magazine-sized instruction booklet is packed with a lot of information, but it’s actually quite straightforward. What I am trying to say is that I sincerely apologize for taking so long to review this really awesome game. Mea culpa, mea culpa, mea maxima culpa.

The story behind Istanbul is that the players are young traders seeking to become a successful merchant in the bazaars of Istanbul (not Constantinople) and gain enough wealth (rubies) to retire. You do this not through theft or aggressive competition, but by doing a better job of trading goods and saving and/or investing money. But don’t worry, you aren’t alone. Each trader has a team of assistants, sent out to acquire fruit, spices, cloth, and jewelry, as well as discovering new bazaars and bringing in Lira (money). There are also Mosques, that provide their own income, as well as other advantages such as extra dice or an extra action. Finally, there are crystals and rubies. Crystals have only one purpose; on your turn, you can give up a crystal to re-roll one or more dice. You can continue re-rolling until you run out of crystals. Rubies are the end goal of the game, and if you get 6 rubies (or 5 in a 4 player game) you win.

As written in the instructions, the game set-up is an intimidating seven steps, but it really isn’t as bad as it looks. The game board is double-sided, with one side for 2 or 3 player games, and the other for a 4 player game. The next (mildly confusing) step is to determine how many rubies to put out on the board, and in what locations. Next to the board, set up 6 Mosques face up to be available to be “bought” during the game. (Each time a Mosque is acquired, a new one is revealed, so there are always 6.) Next to the Mosque display, the Bazaar cards are shuffled and kept as a facedown deck. Goods Markers and Lira coins are organized by type and kept within easy reach of all players, along with the dice. Give each player one Action Summary Aid (aka cheat sheet) and one crystal. Finally, determine which player goes first. This is important since the starting player gets no coins, but the next clockwise player gets one coin more than the previous (two-player game, player one gets no coins, player two gets 1; three-player game 0/1/2; four-player game 0/1/2/3).

The stages of a turn are fairly straightforward, but I would recommend keeping both the “action summary” and the rules book nearby. This is also the type of game where it is a good idea to talk through what you are doing. The first thing you do is collect whatever income you might have from Mosques. Next, you roll your dice. Minimum 5 dice, but there are Mosques that allow you to roll an extra die. You are looking for either dice that match or dice that are all different. If you have a crystal, you can try to reroll to get a better combination. There are lots of options of what you can do with your dice, but you can only perform two actions per turn, unless you have the “extra action” Mosque bonus. Available actions include trading in two identical symbols for a Goods Marker of that symbol, trading in two different symbols for a crystal, turning in three different symbols for a brown “wild card” Goods Marker, or trade in one of each symbol for 2 Markers of whatever trade good you want. You can also trade in all the dice with coins symbols on them for 2 coins each.

Finally, as one of your actions you can use Lira coins or Goods Markers to either buy a ruby or acquire a Mosque. The number of goods or Lira that you need to buy a ruby is the number on the open space next to the space that has the ruby on it. Also, when you have 5 Mosques, you get one ruby for free (4 Mosques if it is a 4 player game).

When a player has the winning number of rubies, play continues until the end of the round. The winner is the player with the most rubies. If there is a tie for the most rubies, all players sell their trade goods and crystals for Lira, and the winner is whoever has the most Lira. If the tie remains, tied players are considered “winners”.

Although it did take a while until I played my first game, I am already looking forward to playing again. The complexity level is on the low end of medium, with a fair amount of tactics involved, but not a lot of strategies. It’s a bit of a shame that the player number caps out at 4, and there is no solo mode. There are expansions, but unfortunately the expansions apply to the original Istanbul game that the dice version was taken from.

You can find the Alderac Entertainment Group online at www.alderac.com or on Facebook at facebook.com/alderac.