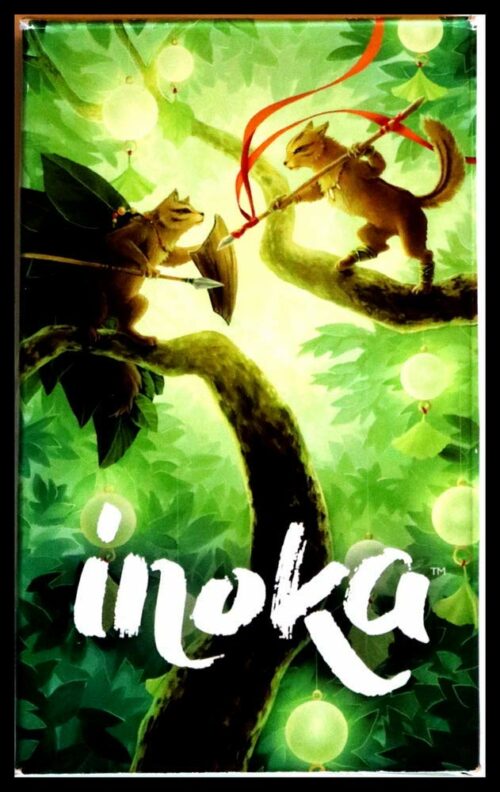 “Prepare. Clash. Triumph. For centuries, the Inoka have guided the spirits of nature. Each generation the most cunning and capable among them clash to earn the honor of being named Nature’s Emissary. Battle with your competitors in fast-paced clashes. Carefully plan your moves to collect the most sacred stones and prove yourself worthy to control the ebb and flow of nature itself.” (XYZ Game Labs)

Based on this back-blurb alone, what would you think this game is about? If you guessed “Rock, Paper, Scissors played with cards”, you are either psychic, or you already own this game. I had no idea what I would find when I opened the box. I was amused by the game concept, but what really made me fall in love was the artwork. Like Azul, Heart of Crown and Somnium, this is another beautiful game. When I saw the art on the cards, it immediately reminded me of one of my favourite fantasy artists (although the actual artist, Amy Nagi, is not who I expected). The artist has the most amazing talent for making small animals that would normally be cute appear both noble and fierce. Doing some research, I found out the original Kickstarter offered some of their higher level backers a Shaman Lore book that provides even more art, as well as an in-world adventure story. And as much as I love my basic version, I really wish I could see that book!

Now, on to the game itself. The game consists of 36 “tactic” cards, 9 “sacred stone” tokens, and two “Leaf Totem” tokens (a large one for everyday use and a smaller one the same size as the stones as a spare). The box also contains a canvas bag and two different rules sheets. The first rules describe the regular 2-4 player game. The second rules sheet describes the “battle royale” variant for 5-8 players, even though you would need two copies of the game to play this variation. The cards and tokens are both good quality, although just for my own preference, I am thinking of replacing the cardboard “stones” with actual glass beads or small stones.

The tactics used to play are Attack (spear), Defend (shield) and Taunt (paw). Defend beats Attack, Taunt beats Defend, and Attack beats Taunt. The first two make sense to me. You block a spear with a shield; and if you trick someone into raising their shield from a fake attack, they are disgraced. Attack beating Taunt seems to be the odd one out, like paper covering rock. Attacking someone who is teasing you seems dishonorable, but maybe it’s just me. When I was playing, we kept the “cheat sheet” nearby. One more thing I should add is that they have included a way to avoid ties. If two or more players throw the same tactic, then the winner is based on the “strength” of the card. All cards, next to their symbol, have one, two or three lines. So a level 3 Attack would beat a level 1 Attack. In the unlikely event that two people play the identical card, you may be required to put down tiebreaker cards. Winning a clash gets you control of the Leaf Totem.

The thing that makes this game different from normal Rock Paper Scissors is that all of your tactics are decided at the beginning of the game. During setup, everyone gets the same nine cards, the three tactics at each of their three strength levels. But you are only allowed to keep 5 cards per round. The cards that you discard at the start stay face down; the cards discarded during gameplay stay face up. The rules are slightly different depending on whether you are playing 2 player or multiplayer.

In a 2 player game, there are two ways to get a sacred stone. Either you need to win a clash using an Attack, while you have the Leaf advantage; or you need to have the Leaf at the end of the round, regardless of whether you won or lost. Whoever gets 3 sacred stones wins the game. A multiplayer game is slightly different. For the first clash, everyone plays a card. The winner of this “free for all” takes the Leaf token and takes on challengers one at a time. If a challenger defeats the champion, they take the Leaf and becomes the next champion. To get a sacred stone, the champion must either keep winning against every other player, or have the Leaf token when everyone else is reduced to their last card. Again, 3 stones wins the game. There is one other major difference in a multiplayer game. In a 2 player game, both players discard their cards at the end of a clash, and play all 5 of their cards. In the multiplayer version, the winner keeps the card they played, and the loser discards. That means that the more you win, the easier it is to keep winning.

The biggest challenge in this game isn’t the individual clashes, but the first decision at the start of the game. How do you decide which cards to keep, and which to throw away? In a 2 player game, do you want more Attacks, to get a stone, or more Defends, to prevent the other player from winning stones? In a multiplayer game, it’s even more complicated. The only complaint I have is purely mechanical. Even though the rounds end very quickly, at the end of each round, you need to sort out all the cards and redistribute them to all the players. So even if a round lasts the 5-7 minutes promised on the box, a full game takes quite a bit longer.

Inoka is a new and pretty way to play an old and simple game. It adds new strategy, and new challenges. I would definitely play it again, especially in multiplayer.

You can find XYZ Game Labs online at xyzgamelabs.com or on Facebook at facebook.com/xyzgamelabs.