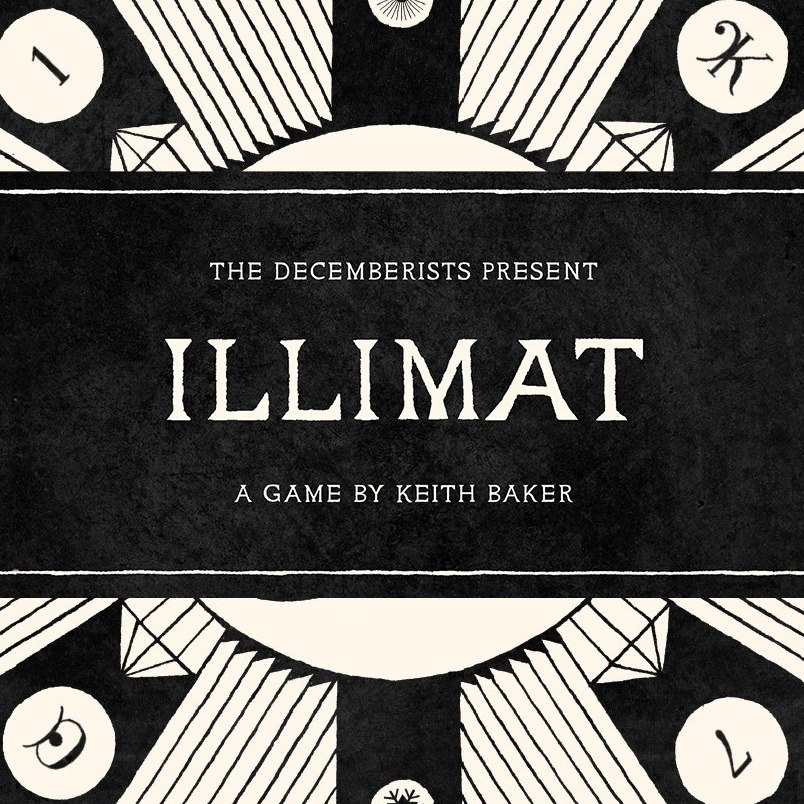 So in 2009, the band, The Decemberists, came up with an idea for a photoshoot where they would be members of a secret society playing this secret game. The prop-game that was created with was called Illimat. Several years and countless tabletop games between shows later the band approached Keith Baker of Twogether Studios and Illimat became a reality.

At its heart, Illimat is a relatively simple trick-taking/set collection card game, that feels like any number of classic card games. At the same time, Illimat presents itself like no other game.

Let’s start with the setup since that’s a reasonable place to start. First, lay out the simple, yet thematically evocative, cloth board. Deal three cards into each of the four sections of the board (called a Field), next take the bottom of the box (the Illimat) and place it in the center of the board with the arrow pointing towards the dealer. Put the four metal Okus tokens on top of the Illimat, and deal out a single tarot sized Luminary card in the corner of each Field.

On a player’s turn, they must play a single card from their hand into one of the fields. When doing this they can take once of three actions: Sow, Harvest, or Stockpile.

To Sow means to simply discard a single card into a field.

Stockpiling creates a stack of cards that can later be harvested together, and can be done in two ways. First, you can play one number onto another to create a new number. So playing a 2 on a 3 creates a stack totaling 5. Another player could add another 2 to that stack to create a 7. The second way to Stockpile is to create a stack of like numbers. So a player could play a 7 on another seven, and that stack will only ever contain the value 7. When doing this, they could also add the previous 2,3,2 stack that equals 7. Once a stack is created those cards cannot be separated, and if the stack is like numbers they only cards that can be added must match that value (in this example, 7). For a player to take a Stockpile action, they must have a card in their hand to theoretically Harvest the stack on a subsequent turn, although they are not required to Harvest it, and another player could still Harvest it first.

Regardless of which action the player takes, if they play a face card (Fool, Knight, Queen, or King) They will turn the Illimat so that the season on the Illimat matches the suit of the face card played. This is important, because the season in a field may restrict what actions may be taken in a field. In Autumn cards cannot be sown, in Winter they cannot be Harvested, in Spring they cannot be Stockpiled, and in Summer any action can be taken. When the Illimat is turned it changes the season and thereby changes the actions that can be taken. If there was a rule every group I played with tried to screw up, it was checking the season restrictions.

If on a players turn, they clear a field by (taking the last card(s) and leaving it empty) there are a couple more things that may happen. If there are any Okus tokens on the Illimat the player may claim one for later scoring. If there is a face-down Luminary card in the field, it is revealed. If there is a face-up Luminary in the field the player claims it for later scoring. If a face-down Luminary is revealed, or there was an Okus token available to be claimed, three cards are sown into the field from the draw deck.

Once all of that is completed, the player draws up to four cards in their hand and play continues with the next player.

The one thing I didn’t really touch on was the Luminary cards. There are eight of these cards, and only four are used in a single round, making for unique changes in each game. To fit with the secret society theme, Luminaries are tarot card sized and inspired. When a Luminary is revealed, and in play, they affect how gameplay works. For example, when The Maiden is in play, she negates the Winter restriction of not harvesting in that field. The rules for each Luminary is listed in the rulebook, not on the cards, which can be frustrating when you want to double check the effect, but also gives them a more “legitimate” feeling.

The 65-card deck is split into 5 suits, one for each season plus a fifth Star suit which is removed from 2-3 player games. The pips on the Summer and Winter cards are the only real colour in the cards, adding to the stark and ancient feeling of the game. The Luminary cards are more colourful, in complimentary Summer/Winter tones, giving an appreciated pop to the otherwise stark appearance of the game (which I love, just to be clear). The metal Okus tokens are well made, but I don’t love the designs. A toy soldier, tooth, sailboat, and bathtub seem very thematically out of step with the game, which honestly may be part of the point, but they could be easily swapped around with the pawns in most Monopoly sets and I hate Monopoly.

I’ve already had players ask me to bring this game with me to future events, and I don’t blame them. It’s a great game that can be enjoyed by more serious gamers as easily as your grandparents that only play Bridge and Cribbage. Games like Illimat make life difficult for me as a reviewer, because all my players want to keep playing it, when I really need to move on to something else, and I enjoy it too much myself to say no.

You can find more about Illimat, including variant solo rules, online at www.illimat.com or on Facebook at facebook.com/illimat.

Twogether Studios can be found at www.twogetherstudios.com.