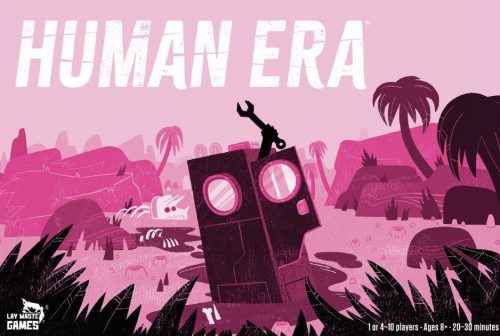 Who wants to play a 4-10 Player hidden role game? My normal answer on that is no because I’m not a huge fan of hidden role games (something that’s not exactly a secret) and more importantly because Alberta is still mostly in lockdown so it’s just not an option. BUT WAIT! There’s a solo mode. That’s right, I said solo mode. How many games at that player count or in that genre can you name with a solo mode. Zero, there may be others but I don’t know of them. (If you do, let me know. Seriously.)

The Story So Far: Humans have discovered time travel, and things go wrong. Who could have imagined that…

In the main game, there are three possible roles that a player may end up with: Human, Cyborg, or Machine. Each role has their own win condition after ten rounds or specific times in the game. Humans win if the game ends with 4, 5, or 6 eras correct OR if any round ends with all six eras correct. Machines win at the end if 0, 1, or 2 of the eras is correct OR if any round ends with zero correct eras. Cyborgs are a little bit more complex. At the end of the game, they share the Machine’s victory if there are two eras correct, share the Human’s victory if there are four eras correct, and win on their own if there are three eras correct. Their mid-game win is equally unusual: if the Machines win (with zero correct eras) in the first four rounds or the Human win (with six correct eras) in the last four rounds, they share in those victories. If there are exactly three correct eras after exactly five rounds, they win alone.

What are these “eras” you keep talking about? There is a hexagonal game board, with each of the six sides representing a different time period (era) in history, each era has a matching Being (card) that belongs there. The game begins with four random being cards placed opposite their correct era, leaving two empty eras (which are considered correct).

The game flows through six phases. First, an era is chosen that either has no cards or by a random die roll. Players then get to discard one card and draw a new one, while the “Pilot” (who gets a funky wrench token) chooses a team to travel to that era. Players then vote if the mission continues with that team or not; if they vote to abort the mission, a random card is placed in that era from the top of the deck. If it proceeds, each team member gives the Pilot one card, who shuffles them along with one card from the top of the deck. One card is randomly discarded and the remaining cards are revealed one at a time and placed in the era. Once all cards are placed, check to see if any paradoxes are created by having the same card on top of more than one era. If there are that older of the cards is removed, if that reveals another card below it check for another paradox. Finally, a fuel marker is discarded to track the round, anyone who played a card draws a new one, and you check if any of the special win conditions are met. The next round begins with a Malfunction (because human technology is derpy as heck) the die is rolled and a random card is placed in that era from the top of the deck.

A solo game works very similarly, except the player chooses to play as either a Human or Cyborg (never a Machine). When they choose a card to play from their hand it is combined with the top card of the deck. If you are playing as a human; if either card could create a paradox, it must be played on top. If you are a Cyborg; if you have the correct card for the era you MUST choose to play it (although you still have the opportunity to discard and draw before you commit to that choice) and if they played an incorrect card but drew a correct card off the deck, the correct card must still be played on top. Everything else is basically the same.

Again, I can’t speak for the group game. But, I LOVE the solo mode. There’s virtually no setup time required, and it plays quickly. Some players may hate the randomness from some of the actions, but that’s an intentional feature, not an accidental flaw. It adds a thematically relevant touch of chaos (humanity rarely realizes how bad they screwed up until it’s too late) and keeps play moving briskly. I wasn’t sure what to expect with this game, but wow. I normally prefer solo games that are a bit lighter-weight and don’t take forever to set up. With that in mind, this is the best solo game I’ve played in a long time, and may well be one of my favourite solo games ever.

My experience has been that everything Lay Waste Games touches is gold (often literally) and Human Era is no exception. They also have another game about to hit Kickstarter, with the first full release of Heads Will Roll. We did a fast, unplanned, video on it for its initial limited release. Give it a watch, and then sign up to get notified when the campaign goes live.

You can also find Lay Waste Games online at www.laywastegames.com or on Facebook at facebook.com/laywastegames.