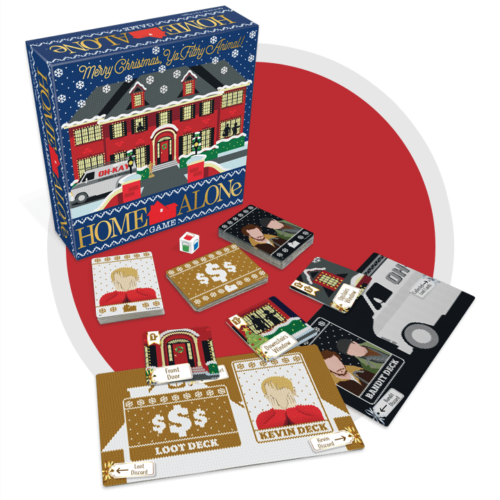 Let me start here. There are few things that I have enjoyed more, on a completely personal amusement level, than playing Home Alone with a person actually named Kevin. Yes, I made them play Kevin because it entertained me. Yes, I am a slightly horrible person.

The second thing that should be mentioned is that much like the last game we reviewed from Big G Creative, Monster Crunch, this game is a seasonal exclusive to Target in the US. While most of our readers come from outside the US, I know a surprising number of people who take this as a challenge. Plus the majority of Canadians live close enough to the border for this to be an inconvenience at worst.

Home Alone is based on the seasonal, cinematic, classic of the same name. In case you have been living under a rock for nearly 30 years, Home Alone is the heartwarming tale of 9-year-old Kevin McCallister’s Christmas adventure when his family inadvertently leave him behind when they go on a Christmas trip. (Really? 1990? It’s been that long? Dang.) In their absence, he manages to defend his family’s home from a pair of hapless bandits. With that, you also have the basic plotline for this game.

One player will take on the role of Kevin, the other takes on the role of the Wet Bandits. On Kevin’s turn, he reveals three Loot cards, face up, to the Bandits. He then picks them up and puts them back, face down, one in front of each break-in location. Then plays any Trap cards he wants onto those locations.

On the Bandits’ turn, they can choose a location, pay the break-in cost by discarding cards from their hand and/or deck. Kevin then reveals the first trap card at that location and resolves any immediate effects before the Bandits choose to disarm the trap or “Take the Pain” and pay a penalty cost. If they pay or disarm the Trap, they can attempt the next trap or retreat. When they don’t want to, or can’t, take actions all the remaining loot and trap cards are discarded, both players refill their hand of cards, and Kevin starts the process over again.

If the Bandits steal $2000 worth of loot, the game ends and they win. If the Bandits’ deck runs out (and they are unable to continue their turn otherwise) or the loot cards run out, the Bandits are arrested and Kevin wins. If Kevin runs out of trap cards, play continues until one of the other end conditions are met. Simple, quick, easy.

The art in this game is equally simple, yet incredibly complex. How so? All the art is stylized as designs on a Christmas sweater. They are so well done that I’m not totally sure it wasn’t actually knit and then scanned. It’s strangely compelling.

The game claims 2-4 Players, but really it plays best with only two. When you add players, they just share the Bandits’ deck against Kevin and need more loot to win. But really, this is a nice light game. If you can get ahold of a copy, do it!

Enjoy this fan-made video montage of Home Alone scenes set to Rockin’ Around The Christmas Tree.