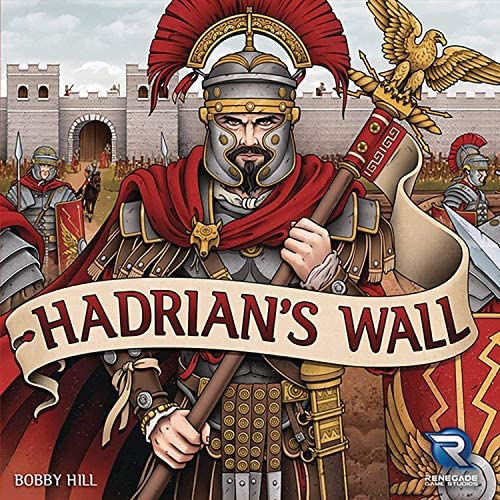 Ok, Hadrian’s Wall: an abridged history lesson. Built during the reign of Emporer Hadrian, in the early second century AD, the wall denoted the northern border between Roman Britania and the unconquered Caldionia. Running all the way across modern England, there were thousands of Roman soldiers responsible for building and defending the wall. While it’s nothing as grandiose as the Great Wall of China, large sections of the wall remain standing 2000 years later.

[Editor’s Note: the rulebook points out that an estimated 30% of the Roman Empire were slaves. The purple “Servant” workers specifically represent these people, although many other historic aspects of the game also relied on slaves. No one involved in this game wishes to erase the lives of people forced into that history. -dc]

On to the game.

Hadrian’s Wall, the game, is harder to quickly summarize. The game is widely considered one of the most complex Verb and Write games on the market. This is one of those games that you really should play two or three games before forming an opinion about it. Very few people get it before playing their first game. By their second game, most people get it. For most players, game three is when things get really competitive. That’s not to say it’s not fun in games one and two, there are simply a ton of options and paths to victory.

Each player has a matching set of 12 cards, a two-piece player board, and two jam-packed sheets to write/track your actions on. There is a communal deck of Fate Cards and a Supply of wooden resource and worker components. That’s a LOT of stuff for Flip and Write games before ever getting started.

At the start of each of the six years (rounds), a Fate Card is revealed and all players receive the resources shown on that segment of the card. Players also randomly draw two of their player cards, choosing one card to gain resources from that year and the other is tucked under that year’s space of the player board for a unique end-game scoring bonus.

From there the game, like many games in this genre, becomes a largely solo experience, parallel to the other players. It’s a 24-page rulebook, with 18 of those pages dedicated to describing the various actions a player can take, so I am going to condense these options quite a bit for brevities sake.

In general, a player will exchange one of six types of worker tokens (Civilian, Servant, Soldier, and Builder), a generic resource token, or a combination of tokens to fill in one of the boxes on their pages. As the game progresses and more spaces are filled, the player can gain immediate bonuses in the form of additional physical tokens or intangibles that translate into specific actions on their page, which can then provide more bonuses, and so on. An ideal strategy creates a chain of actions off of a single choice. Until a player can build a Market, the game remains effectively solo. The Market starts to allow for some limited player interaction by purchasing Trade Goods from neighbouring players, or the Fate Deck.

Once all of the players can’t or, choose not to, take further actions the year ends. Any leftover tokens are not carried over, and players have to defend against the invading Picts. Based on the year and difficulty chosen, a number of Fate Cards are flipped over revealing which of the three cohorts of soldiers need to fend off the invasion. Like everything else, the strength of these cohorts are increased by what actions a player chooses. Successes and Failures are recorded as immediate Valor Points (which may then provide a Soldier going into the next year.) or as Disdain which is counted as cumulative negative points only at the end of the game, and that can be negated through actions during future years.

For as complex as gameplay can be, the endgame scoring is incredibly straightforward. Add up your Renown, Piety, Valour, and Discipline spaces that were filled in by your actions, subtract any remaining Disdain, done. Easy.

There are some minor changes made for solo and two-player games, but nothing significant enough to mention. I had to play this exclusively solo, and have decided that learning it in a group is probably going to be easier for most people. There are so many options, that it can take someone else doing a thing before you remember it’s a thing you can do and why. I look forward to trying this in a group and then coming back to it solo afterwards.

As I was working on this, the fine folx at Garphill Games released a Solo Campaign mode from designer Bobby Hill. The campaign walks you through the 16 main forts that were known to be built along the wall, east to west. Each fort has a quick blurb on the history of that location, any specific rule alterations, your goal to move forward to the next fort, and an optional challenge to gain bonus rewards going into your next game. The campaign was intended to be played at Normal Difficulty, but I honestly failed even at Easy Difficulty. Again, I want to come back after playing some group games.

You can find Garphill Games online at www.garphill.com or on Facebook at facebook.com/garphillgames.

Renegade Game Studios is online at www.renegadegames.com or on Facebook at facebook.com/PlayRGS.