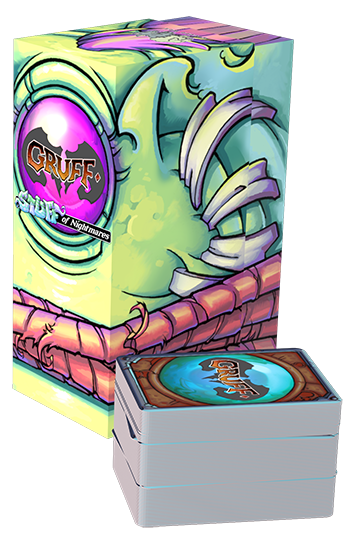 It seems to have become a near tradition to start my Gruff reviews with the Story So Far introduction from the rulebook. I’ve done it for two out of three sets, so I may as well do it here as well:

What happens to the nightmares that you forget upon waking? They are absorbed into plushy creatures until their tiny frames can take no more and they are twisted into monsters called Stuffkin! These stalwart toys will defend The Dreamers until the last of their stitching is ripped and their stuffing is scattered across The Betwixt!
A new threat emerged to shake the sanctity of the dream citadel known as “Respite.” The troll Grumblesnore has emerged from his slumber to devour the hopes of The Dreamers. Only the Shepherds of Woe stand in his way.

I’m going to really abbreviate how to play Gruff, having covered it before in our Core Game, Clash of the Battle Goats, and Rage of the Trolls reviews. Short version: Each player selects a Shepherd (each having a unique ability), and three Gruffs (each also having a unique ability, and a corresponding set of 15 Ability Cards). Finally, the players each build a deck of 24 cards from the combined Ability Cards of their Gruffs. There is no rule preventing players from playing the same Shepherds or Gruffs, but this would only happen when players each have their own cards.

In standard Player vs Player games, a Gruff only attacks the opposing Gruff directly across from them, with any excessive or unblocked damage being applied to that player’s Shepherd.

A player loses the game in one of two ways. If their Shepard is reduced to 0 Life, they lose immediately. If all three of their Gruffs are dead during their Activation Phase, they skip their turn. If they survive until their next Activation Phase, they lose. This gives their opponent the pleasure of a final, potentially lethal, attack. In multiplayer games, this can also impact the game for the other players, as their cards are still in play for another round.

Stuff of Nightmares was originally offered as a Kickstarter Exclusive standalone game. However, it was successful enough that it is now available alongside other the Gruff sets.

The game comes in the same, full-sized, box as the original core game and actually includes slightly more playable components than the original. There are 8 Shepherds,15 “Monster Goats” (Gruffs), and 3 Troll Bosses. It also includes a bonus 16th alternate Legendary Gruff, Ol’ Darby: The Crotchety, that uses the Ability cards from the original Ol’ Darby card.

The Shepherds have some unique new features. For example, when Mitchell’s life drops below a certain threshold, he retreats from the game to be replaced in battle by his jaded apprentice, Breinholt. Also included is the first Legendary Shepherd, Gristle: The Vengeful. Legendary Shepherds differ somewhat from Legendary Gruffs since Gruffs have Ability cards and Shepherds are essentially stand-alone. There is a growing online lore surrounding Gruff, that explains the evolution of Shepherds and Gruffs from their original forms to their Legendary counterparts.

This set also introduces players to a new faction, The Stuffkins, which are “created from the dreams and nightmares we forget upon waking which collect within plushie [toys]”. While every Gruff is unique, and every faction has an overarching theme, The Stuffkins are visually the most distinctly different faction, with a texture and colour pallet all their own.

The other major change is the addition of “Brands”. These subtle ruins are tucked away in the corner of certain cards, and if a player selects the Shepard, Gruff, and Ability cards, that are marked with the same brand they will be playing with a balanced pre-built deck. There are still eight cards for each Gruff that are marked with a Starting Star icon, to help new players select cards in their first games.

Gruff continues to be a great game, and it evolves and improves with each and every new product. I’ll be watching and waiting mostly-patiently for Studio Woe’s next Kickstarter project, you should too.

Experience the nightmare for yourself, and check out Studio Woe online at www.studiowoe.com or on their Facebook Page, facebook.com/studiowoe.