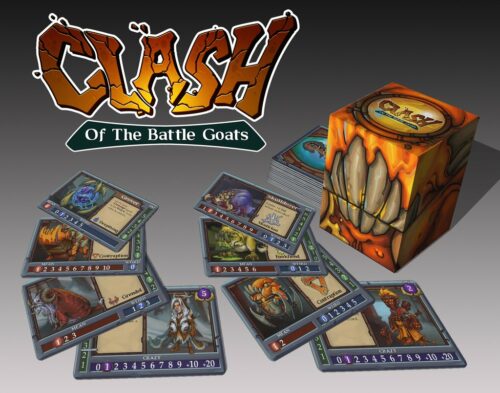 Exciting news came through my feed this week (last week by the time this review goes up). As I was working on this review, Studio Woe announced on their Facebook Page that the Gruff World Championship will be held at Gen Con. I considered tossing my name into the Goblet of Fire, but with a starting field of only 16, there are certainly more deserving players out there. I’m most certainly going to try to stop and check out the excitement, no matter what.

Gruff is a great game, that just gets better the more you play it. The first time I played more than a demo, was when I cracked into what was Studio Woes’ latest Gruff expansion, Rage of the Trolls. It was a new release and has a great solo mode! I pulled it out again several times but didn’t pen to paper (fingers to keys?) on the Core Game for a couple more months. Now, I’m finally writing about Clash of the Battle Goats.

I gave a more in-depth gameplay overview in my Rage of the Trolls review, but here are the basics:

Each player chooses a Shepard. This is that player’s unique (in every sense of the word) character for the game. Each Shepard has their own special ability, and a track to mark their current Life and Crazy values.

Once they have chosen a Sheppard, the choose three Gruffs. The weaponized and mutates creatures that were once just goats. Like the Shepards, each Gruff has an individual ability, tracks to mark their Mean (offense), Fat (defense), and Weird (that affects the Shepard’s Weird), values. They also are marked with one an Icon representing the Faction it belongs to. There are cards or abilities that reference Factions, but mostly it’s a clue to how that Gruff will play.

Finally, each player chooses eight Ability Cards from each Gruff’s individual options and shuffles them together. This is probably the hardest part of the game. Each Gruff has about 15 cards available to them to choose from, with eight of them marked as recommended starting choices.

Once the game starts each player takes turns activating a single Gruff, playing cards, and taking Tactical Actions, until either their opponent’s Shepard or all three of their opponents Gruffs, are dead.

Clash of the Battle Goats comes with enough of everything for two players to play out of the box, but it IS an expansion, making your choices a bit limited. There are six Shepards to choose from, which helps the standalone replay value since each player only uses one per game. There are six new Gruffs to choose from, which means they will all need to be used if you don’t have other sets. There are also four Legendary Gruffs that don’t include Ability Cards.

Legendary Gruffs are alternate versions of previously published Gruffs and use the cards belonging to their standard counterparts. For example, Gusto gets +1 to his Mean value when activated. His Legendary counterpart, Gusto the Goatercyle, gets +1 to his Mean value when he swaps places with an allied Gruff. The artwork is subtly different on the fronts of the cards, and Names on the back are in slightly different sized type to differentiate in the box. Thankfully they improved on that with Rage of the Trolls by including the full Legendary names on the backs.

Whether you just pick up Clash of the Battle Goats to try on its own, or you pick up other sets with it, Gruff is a great game that I always enjoy pulling out for a night. As I said at the beginning, Gruff gets better the more you play, because the more you play the more combinations of Shepards, Gruffs, and Ability Cards you can experience and learn. Trust me, it’s worth the time.