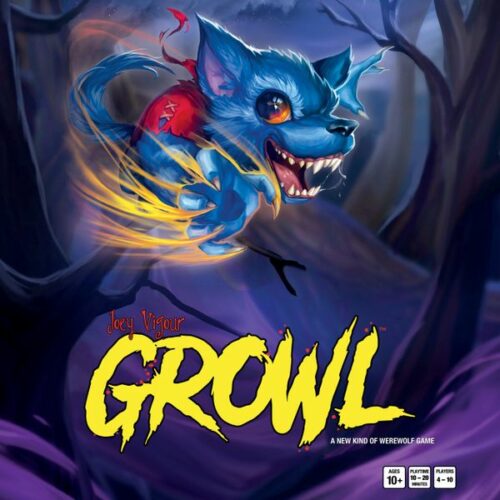 At first glance, it would be easy enough to dismiss Growl as just another Werewolf game. The core concept is not dissimilar, and the end goals are the same, but most of what happens in between is very different.

Let’s quickly go through setup and gameplay, it won’t take long but it does change slightly depending on the player count.

The game supports anywhere from 4-10 players with cards labeled ‘6+’ for 6-8 player games, and ‘9+’ for 9 & 10 player games. Add or remove those cards as needed, then set aside a listed number of Bite cards and a Gold card for each remaining player (4 players = 1 Bite & 3 Gold). From there, randomly select two Night cards and one Final Night card, and set them aside as well.

Take the set aside Bite & Gold cards, shuffle them and give one to each player. The player(s) who receives a Bite card will play the entire game as a Werewolf, everyone else starts the game as Human. Only in an 8-10 player game do the Werewolves know who each other are. Deal out three more cards to each player, if anyone is dealt three Bite cards, they secretly become a Werewolf.

From there, insert the Night cards about a third and two-thirds of the way through the remaining deck, place the Final Night card on top of the face-down deck, then flip the deck over so the cards are all face up. The first player takes the entire deck, reads the top card so everyone knows what it is, gives that card to another living player, and passes the deck to the next player. This continues until a player reads off a Night card.

Once the Night card is read and resolved, no one may talk until after the Night Phase. During the Night Phase, every living player will choose one card to pass, facedown, to the players directly on either side of them. Without looking, the players shuffle the two cards they received and add them to their hand. It’s important that the players aren’t sure who gave them which card, as only a Werewolf is allowed to pass a Bite card during the night.

Besides Night cards, there are only five cards in Growl. (It is more accurate to say there are five icons in Growl, but in most cases that means the matching card.)

Gold- Both living and dead players on the winning team get an extra Gold Token at the end of the game for each Gold card in their hand.

Bite- If a player ever has three Bite icons in their hand, they immediately, permanently, and secretly, become a Werewolf. Only a Werewolf may choose to pass a Bite card during the Night Phase.

Charm- Each Charm icon in a player’s hand counters one Bite icon. For a player to become a Werewolf they need three un-countered Bite icons. If a player has three Bite icons, and two Charm icons, they only count the one remaining Bite icon towards becoming a Werewolf.

Wound- Like Bites, if a player ever has three Wound icons they are killed. Dead players do not take turns, pass or receive cards, and can not be targeted by effects. Dead players do, however, still win if their team is victorious.

Salve- Like Charms, each Salve icon in a player’s hand counters a Wound icon in their hand.

Play continues until there are only two players left alive, or the conclusion of the Final Night Phase. Once players have passed their last cards and checked to see if they survived the Final Night, the Werewolves start to growl and any surviving Humans stand up and cheer. If there are any Humans left alive to cheer, they win. If there are only Werewolves, they win. Every player, living or dead, on the winning team get one Gold Token, plus the number of Gold icons in their hand. You can keep track of Gold between games to determine the King or Queen of the Werewolves at the end of the night.

I don’t really like social deduction games. If given the option, I’ll probably pass on playing one, but I have still played enough of them over the years to understand and evaluate them.

I like Growl. Unlike its inspiration, it leans much heavier towards secret role than social deduction. It’s easy to learn the rules for, it plays quickly, and nobody needs to sit out to be a narrator. I will play this again. I WANT to play this again. With Halloween being on a Thursday this year, most of the parties are happening over the next few days. What that means is that you, my good reader, have some more time to pick up a copy Growl in time to bring it along. I know I’ll have my copy with me.

You can find out more about Vigour Games online at joeyvigour.com and Growl on Facebook at facebook.com/GROWLgame.