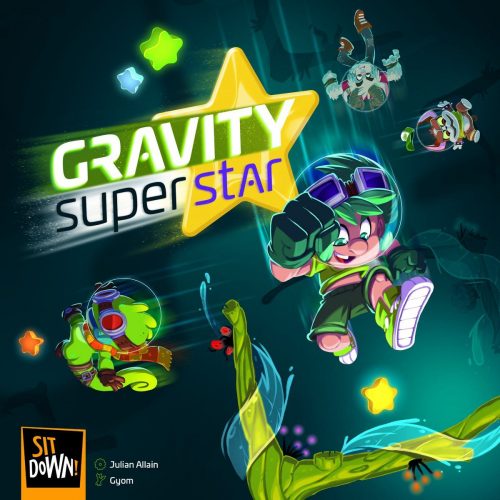 Relativity by M.C. Escher is easily one of the most recognizable yet unrecognized pieces of art in the world. Remember that scene in Labyrinth, and dozens of other shows, with staircases going all over the place and the normal laws of gravity don’t apply? That’s based on Relativity. I couldn’t swear to it, but I’d be shocked if Gravity Superstar didn’t take a huge amount of its inspiration from that same artwork, since gravity in Gravity Superstar is relative.

How the game works, is every player has an identical hand of cards with a variety of movement options, on their turn each player plays a card, resolves the movement, and then falls straight down until they land on a platform. “Down” always refers to the direction of your player-pawn’s feet. If you play a card to rotate your pawn 90° then “down” also rotates so that the pawn falls “down” for that new orientation.

When you move, your goal is to collect as many coloured stars as possible by passing through the square they are in. Some stars, when collected, leave behind an icon that gives players who cross over it a Replay Token. These tokens are worth one point at the end of the game, or can be spent (once per turn) to play a second movement card.

Scoring is simple. One point per replay token, one point per collected star (regardless of colour), plus one bonus point for every pair of stars of the same colour.

For a game that has such simple mechanics, it is weirdly addictive. I played it with a friend and her kids, and the kids didn’t want to play anything else the whole time I was visiting. I can’t even pretend to be upset by that, because I loved playing the game just as much.

The box comes with six double-sided board segments, allowing the configuration to change depending on the player count, or sometimes even during the game. But the board is fairly simple otherwise. The art on the action cards is equally simple, visually conveying what it does and that’s all. The icons are easy to understand, so there is no language reliance beyond the rulebook (which comes in four languages, by the way.)

The art for the characters, called Superstars, is stunning. I had several debates over which character is more adorable. It’s honestly one of the most striking things about the game. But the bulk of the components come in a pretty close second there. The player-pawns are thick but rounded on the top which gives them a distinctly bubblier, or maybe spacier, feeling compares to the standard wooden meeple. The stars that players collect are similarly thick but flat for easy placement. Both of these are made from frosted plastic which is, again, gives a unique look and feel. The replay tokens are transparent discs a bit larger than a poker chip, but not as thick. While they are a more standard plastic, the contrast with the frosted pieces makes the tokens seem energetic, almost like how an energy shield is depicted in most science fiction programs.

Everything in this game is so simplistic yet so elegant. It’s incredibly well balanced, so when the kids insisted on playing a three-player game with the larger six-player board layout, the game just got longer and the scores were obviously higher, but it didn’t break the game the way some games can when you do something like that. This is easily one of the best family-weight games I’ve played in a very long time. It does seem to be one of those games that frequently goes in and out of print, depending on where on the planet you live and the language you want, so if you can find a copy at a reasonable price, snatch it up fast.

You can find Sit Down! (and tell them you want this back on shelves) online at www.sitdown-games.com or on Facebook at facebook.com/sitdown.jeux