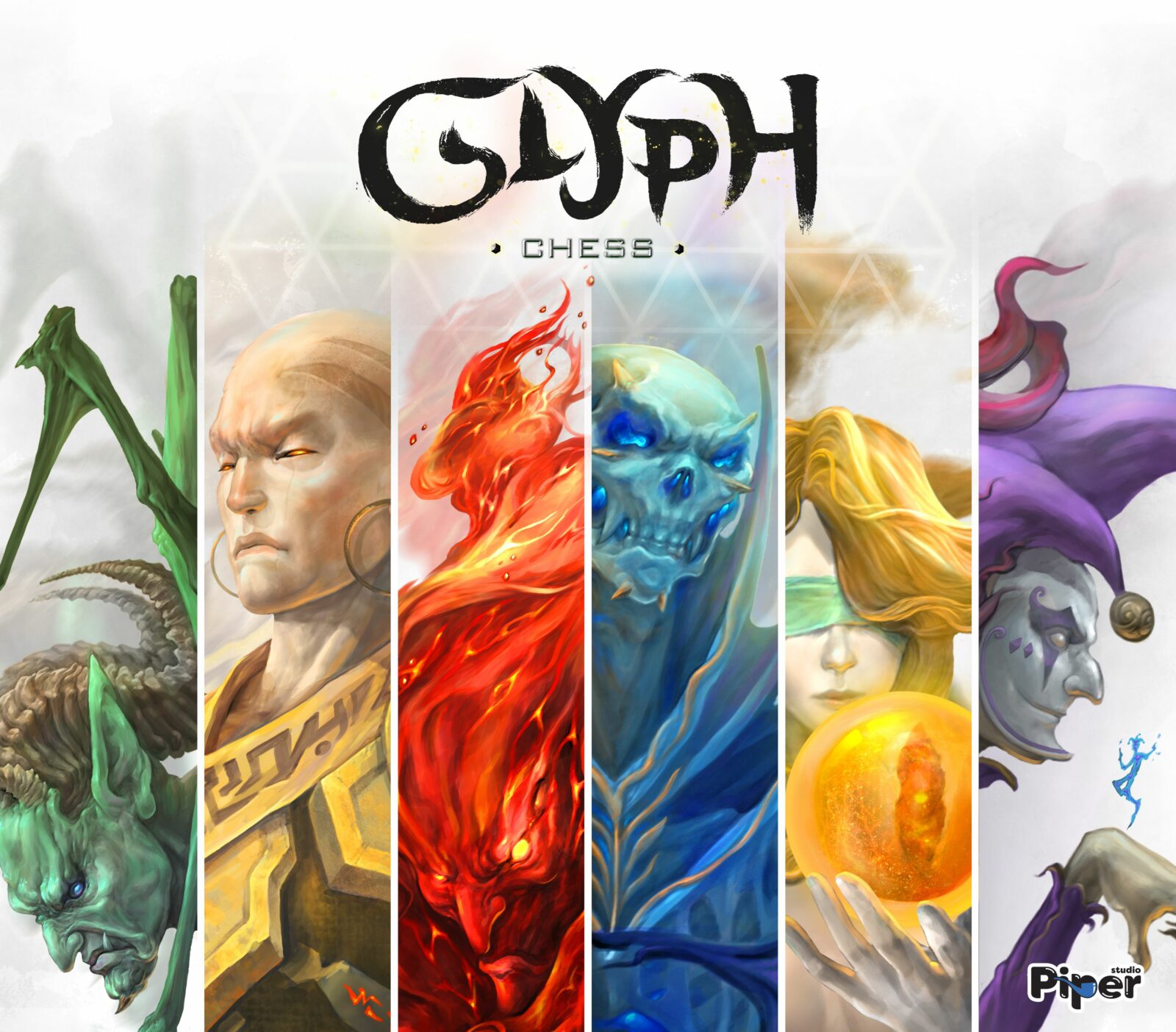 Glyph Chess is a chessboard-style game adapted from the pages of the Chinese comic book, Tales of Tarsylia. It is described in the rule book as “the most popular game in the magical world and can only be played by the most powerful wizards.” I’ll have to trust the rulebook on that, as I found an English edition of the comic existed, but I could only find Chinese and French editions currently available. Disappointing.

The sizeable box comes with components for a standard 2 player game, and there is also an expansion that allows you to add a third player to the game. In order to win, a player must maneuver their Scepter piece to the center of the board, or eliminate their opponent or opponents’ Scepters. Each piece has its own abilities which, like movement, is activated by consuming (using/spending) dice, coins, or both.

Each turn a player draws a Glyph Coin from their own bag (to a maximum of five), keeping it hidden from their opponent. There are 12 coins, two for each of the main pieces, and if a specific piece has been removed from play their coin may be spent as a wild coin for any piece. There are also five dice with each face, again, representing one of the six main pieces. Players may use the dice (and/or coins) to move or activate the ability of the shown piece. At the start of the turn, a player may reroll all of the dice showing pieces they do not have in play. At the end of player’s turn, they will reroll any dice they consumed that turn, creating the dice pool their opponent will begin their turn with.

As much as this is referred to as a chessboard-style game, that description is probably equal parts accurate and inadequate. Of the eight types of pieces, the Scepter is the most analogous to a chess piece, the King. The Minions and Force Mage are the next closest, but why don’t we just look at all of the pieces, shall we?

The Seeress has a passive ability that prevents any opposing piece “in her sight” (across any and all unobstructed movement lines) from using Glyph Coins and can also spend a coin to see a player’s coins and move two of them to the used coin area.

The Illusionist can consume one die to swap places with another friendly piece, or a coin to create a Replica. Once in play, there is no difference between Illusionist and Replica pieces but there can only ever be two on the board at once.

The Elementalist has the passive ability to incinerate a killed piece, removing them permanently from the game (see below). They can also consume a coin and X dice to move a single space, in any direction, X times. Because they are making multiple moves they can change directions, unlike regular movement which would consume however many dice to make a single move, that many spaces, in a straight line.

The Force Mage is roughly analogous to a Knight, in that it can pass through other pieces during its movement. It can also consume one coin and X dice to move X spots as normal, and killing all opposing pieces adjacent to where its movement ends. While this can be very powerful when it works, it can also be very difficult to set up effectively.

The Scepter is the King, as I mentioned. A player wins by moving their Scepter to the center point of the board, or by killing the opposing Scepter. In a three-player game, killing a player’s Scepter also removes all of their remaining pieces from the board. Technically it removes them in a two-player game as well, but short using the moment to gloat there isn’t really a need for it, the game is already over.

The board itself, actually called the Chessboard, is a hexagonal grid of triangles. The pieces move along the grid lines, rather than in the spaces created by them, with the exception of the very center point that as an open circle to act as a target for the Scepters.

Despite there being a lot going on, with dice and coins and multiple abilities, it was a surprisingly simple game to pick up. Players each have a card shelf that holds a reference card for each piece and allows them to keep coins hidden. Newer players may get stalled occasionally while checking abilities, but that’s to be expected. The combination of individual hidden coins and a common dice pool creates a unique blend of strategic thinking and randomness that can force a player to re-strategize on the fly. A lucky roll at the right time can most certainly determine the winner, but it takes solid play to get to that point.

Aside from the enjoyable gameplay, you can’t talk about Glyph Chess without talking about the components. The board is printed on a thin neoprene mat, allowing it to fold up without any creases or board seams, and it looks better than cardboard. It’s also thin enough that the pieces are reasonably stable, which is important because the pieces are much larger than you’re probably envisioning. With the exception of the Minions, these pieces are probably the tallest I can think of, outside of a scaled miniatures game. Given that, I was pleasantly surprised at how stable they stood. The Illusionist is a bit top-heavy, but that only caused an issue once or twice over the evening, and always as a result of a player’s actions around it.

The size also shows off the exceptional sculpting. The pieces are gorgeous, as is the card art; I suspect any criticism I have is ultimately a result of the comic book creators more than the game creators. I love the card art for the Illusionist and the Seeress. I love the sculpting on the Illusionist and the Seeress. However, unlike the other pieces, the two are in no way similar. The pieces are a much more abstract representation, compared to the other pieces. Once you realise that, it’s not an issue at all, but it caused some confusion at first glance, and for the first few turns of the game.

I have one specific friend that I play most of my two-player games with. She’s smart, a good player, gives constructive opinions, and our schedules align well enough that it works out well. We’ve played a lot of games together. As much as I loved playing this game, she said this may have been her favourite of all the two-player games we’ve ever played, and to me, that speaks volumes. I don’t know that I’d call this my absolute favourite two-player or even favourite abstract strategy game, but it’s not far off the top of both of those lists. If I ran a game cafe, or even a nerdy pub, this is the sort of game I’d be very tempted to make a permanent table for.

Bluepiper Studio is not predominantly a game publisher, in fact their current Kickstarter is for some adorable Mr. Otter “art toys”. With that in mind, I was impressed at how good Glyph Chess plays.