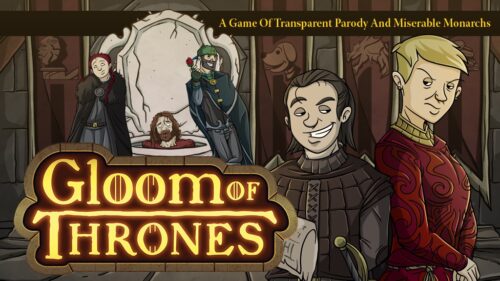 It’s cold, and snowy here. The world is under quarantine, with the only solace (here) being that it is cold and snowy outside. Sufficed to say, things are pretty damned gloomy right now. It’s a time when we all need to pull together and help our neighbours. As much as anything, that’s what the game of Gloom is all about. Helping your friends and neighbours to find to be healthy and happy and loved. Sure, that may mean your own family may suffer and die but they were jerks anyway.

I’ve never seen the show this parodies, nor read the books. But I have played Gloom once, or twice, or a few hundred times, in its many forms and themes. It’s a great game for just about any group. Got a bunch of introverted players? It plays just fine. Got a bunch of storytellers? Even better! Let me explain.

Each player in Gloom of Thrones starts with a family of five characters; The Snarks, The Bannisters, Kelly’s Dragons, or the Free Agents; and a hand of five transparent cards. On their turn, a player may take two actions, the most prominent of which are Modifiers and Untimely Events. The modifiers are the meat of the game, and where a storyteller can really shine. As an example:

“CERIOUSLY BANNISTER (character) never wanted to be queen of this shambolic land! She wanted to be a lumberjack, but nooooooo. She WAS CATASTROPHICALLY CROWNED (modifier, 1st action) after losing (yes losing) a fight for the crown. Sadly she might have won if she had cheated, but instead, she FLINCHED FROM A FAIR FIGHT (modifier, 2nd action)”

Let’s break that turn down. For their first action they played the modifier card: WAS CATASTROPHICALLY CROWNED. It gives that character two Self-Worth modifiers, a +10 in the top slot, and a -25 in the middle slot, for a total self-worth of -15. Next, they played the modifier FLINCHED FROM A FAIR FIGHT which gives a -10 in the bottom slot, and covers the +10 in the top slot with a -10, giving CERIOUSLY a self-worth of -45. This is a good thing because next turn they could play an Untimely Death as their first action (and ONLY their first action, never the second) on a character with a negative self-worth score.

Now let’s look at that same turn with a different style of player.

“I play WAS CATASTROPHICALLY CROWNED on CERIOUSLY BANNISTER followed by FLINCHED FROM A FAIR FIGHT. She’s now worth -45.”

Same results, different styles. For the record, both of those modifiers also have an effect that happens when they are played, that I just skipped over (a great, simplified, way to learn the game), and some Story Icons that may or may not have an effect on play. There are a few different Story Icons, but the one example I do want to talk about is the Crown Icon. In the example above, WAS CATASTROPHICALLY CROWNED has an effect that says anyone with the Crown Icon in play must discard any Event cards in their hand. If CERIOUSLY had the Untimely Death card WAS CROWNED BY THE CALL played on her next turn, that same icon would make her worth and extra -15 points.

The Crown Icon, specifically, has another impact on gameplay. Instead of an Iron Throne, Gloom of Thrones has The Porcelain Throne. Whenever a character has a modifier with the Crown Icon played on them, they become the Monarch sitting on The Porcelain Throne and are worth an extra -30 self-worth. But only the last character to die on the Throne will actually get to keep those points. Basically, it is a theme-appropriate version of the Story Cards from other Gloom games.

Gloom of Thrones is a completely stand-alone game, but it can also be integrated with any of the previous Gloom games and expansions. When it comes to licenced and parody themed games, I’ve always said that a good game will be good even if you don’t know the source material. Gloom of Thrones is a good game, even a great game, and is just better if you know what they are poking fun at.

As I write this, I’m in quarantine over the COVID-19 pandemic. That makes getting a group of players together both difficult and unwise (I played this safely before all this blew up). While Gloom of Thrones is only available as a physical game, Sky Ship Studios (with Atlas Games and Asmodee Digital) does offer the Gloom: Digital Edition on Steam. So you can play with your friends or family and only risk dying of a plague IN the game.

For the physical version, you can find Atlas Games online at atlas-games.com or on Facebook at facebook.com/AtlasGames.