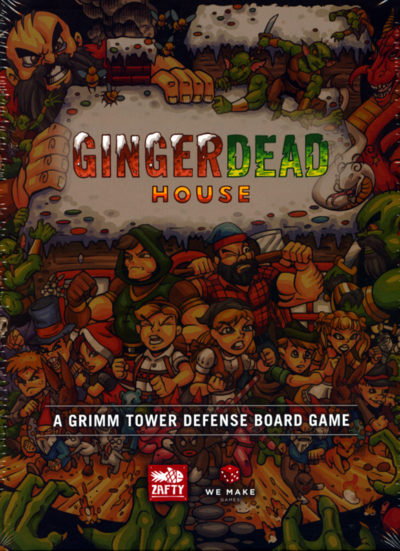 ‘Tis a magical season outside right now. Children are laughing, eggnog is flowing, and everywhere people are building gingerbread houses (or maybe not depending on what time of year you read this). But what do you do if you aren’t the crafty type, but still love gingerbread? Simple, you buy a gingerbread house, in a gingerbread neighbourhood, in the enchanted forest. However, there’s a problem that your realtor forgot to disclose. It’s in the enchanted forest, which means all sorts of ogres, witches, and trolls, are out there and they will stop at nothing to get a bite of your sweet delicious investment.

Gingerdead House, from Zafty Games, is “a Grimm tower defense board game” in which you and your neighbours must band together, to collectively defend your homes from the onslaught of the enchanted forest and… no. No, that’s not going to happen. Your neighbours are jerks, and will basically do anything they can to keep their own houses un-eaten.

Setup is pretty simple. Each player has their own game board, with four columns each divided into five rows. There are three decks of cards, and Player deck, an Action deck, and a Monster deck. Each player draws from the Player deck until they have three defense cards on their board, then draw another five cards for their hand. Each turn a player will flip over an Action card and resolve its effect. The Action cards also show how many cards from the Monster deck come into play on that player’s board. Every monster card has a strength and most have a special effect; Monster cards enter play one at a time, at the top of the board, in the column indicated on the card. If a second Monster card enters play in the same column it pushes the existing card one space closer.

The player then has the opportunity to play Trick or Defence cards from their hand and use any effects from Defence cards in play before the monsters advance. Monsters advance and combat is resolved column-by-column, left to right. If you survive, it becomes the next player’s turn. If any monster advances past your bottom row, you are out and it still becomes the next player’s turn.

Gingerdead House is a great game. Tower Defence mechanics are always pretty simple, and designers have done a good job spicing things up with the various card effects, and a reasonable amount of screwing with the other players. The art strikes a great balance between “cute” and “gloomy” and I greatly appreciate the layout. While the art is all very colourful, it has been intentionally muted and used as background images. It gives an incredibly unique feeling, and also allows the text and icons to really pop out. The game has a larger than average footprint, with the player boards large enough to hold 20 standard sized cards, so you need some space. The boards are super thick, and even the cardstock seems to be above average, so it’s definitely a game that’s built to last.

My only complaint is a bit of a pet peeve of mine. The box just as high quality as the components, but the plastic insert is awful. This game is a completely expandable product, there are so many opportunities for new cards. They already have 2 mini-expansions: The Walking Bread and Star Smores, and they are AMAZING. Here’s the thing, neither is more than 15 cards and there’s already no room for them! The insert has 4 spaces to keep your cards, and they barely fit the existing cards, if you split the decks up exactly right. I can think of at least three ways they could have made this packaging suck less without even trying. Function people. Why must we all suffer from bad packaging?

Anyhow, packaging rant excluded, this is a fun game, with a theme I adore, that is gore-geous to behold. Now if you’ll excuse me, all this talk of gingerbread has made me hungry…