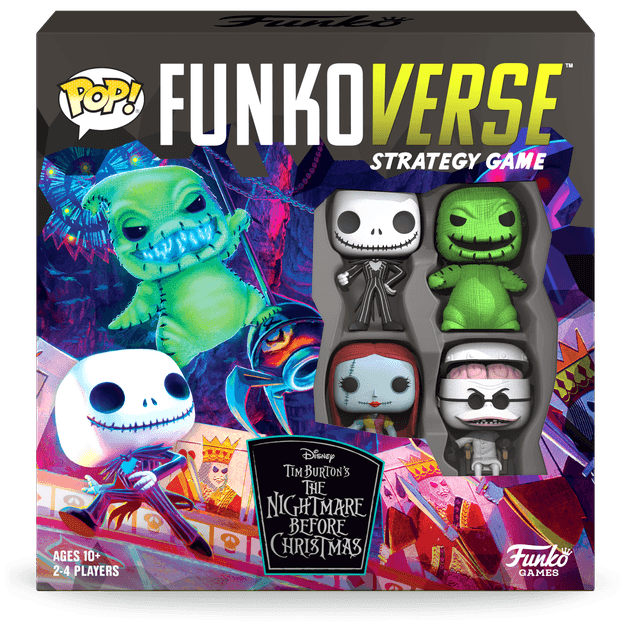 Unless you have been living under a rock for the last decade maybe two decades, you have seen Funko Pop Figures. Cute (or not) vinyl figures with big heads, covering every fandom you can imagine. In 2019 Funko inc purchased the Forrest-Pruzan Creative game studio (aka Prospero Hall). One of the first big games from the new Funko Games was Funkoverse, an entire line of 2-4 Player strategic battle games. Each set of four characters was themed to a different IP that Funko has a licence to. To go back to the beginning of this review; that’s damn near everything. Much to the surprise of many people who expected another mediocre fanboy game, it was really good.

The game has a bunch of finicky character-specific rules, but the basics are fairly straightforward:

Your first is game is the simplest. You are only going to need to read part of the instructions to get playing quickly. It’s a straight PvP(vPvP) knockdown, knockout battle. Each character can take 2 hits, the first hit knocks them down, the second knocks them out of the game. When you knock out a character you get a point and that character respawns where they started at the beginning of the next round. Later games let you set up one of several included scenarios.

Each player gets a mean character and a “basic character” that acts as a bit of a sidekick. The player will select one of their characters and do two actions with them. They can MOVE up to 2 squares, they can make a BASIC CHALLENGE (attack), ASSIST (stand up a knocked down ally), INTERACT (with a scenario element) or perform a SPECIAL ACTION (an individual character ABILITY or USE ITEM (in some scenarios). When that character is done, place a token on that character’s card to show they can’t be activated again. The next player goes, and so on until all characters have been knocked out or used.

When the round ends, all the exhausted markers on characters are removed, the first player marker is handed to the next player, and anything on the cooldown track moves down. (What’s a cooldown track, read on my friend, read on.)

So that’s the main game rules. Let’s look at the Nightmare Before Christmas rules, specifically.

The main game board is double-sided with one side showing Oogie Boogie’s Lair and Halloween Town on the other. Each side of the board also has two scenarios associated with it.

Oogie Boogie: Uses Yellow and Grey tokens, plus a pair of special Boogie Dice (stylized after the movie dice). He has a unique Trait called JACKPOT! That lets him shift one ability marker down a space on the cool down track if all the faces match on any dice roll.

Dr. Finkelstein: Uses Grey and Yellow ability tokens. He has a unique trait called MAD SCIENTIST. At the start of the game place the Igor minion token adjacent to Dr. Finklestein. When Dr. Finklestein becomes exhausted, Igor does a move 2 and pulls an adjacent ally 1 space.

His abilities are: FAITHFUL SERVANT (cost Yellow:2)- Place Igor adjacent to Dr. Finklestein and he does a non-interact basic action. IT’S ALIVE!!! (cost Grey:2) Choose a token or marker within 2 spaces of Dr. Finklestein. It does a challenge 3 at a range of 2. BRAIN SCRATCH (cost Grey:2) Move 2 and shift two things on your cooldown track down 1.

Her Abilities are: DETACHABLE ARM (cost Blue:1)- Place or move the Detachable Arm minion token adjacent to Sally, or remove it from the board and place Sally in its space. WHAT HAVE WE HERE? (cost Blue:2)- Sally and the Detachable Arm minion token each do a different non-interact basic action. NIGHTSHADE SOUP (* cost Grey:2) Challenge 3. Challenge 4 if the target is exhausted.

Jack Skellington: Uses Yellow and Blue ability tokens. He has a unique Trait called MAKING CHRISTMAS that lets any allied character within 2 spaces of Jack uses Jack’s abilities as if they were their own.

His abilities Are THIS IS HALLOWEEN (* cost Yellow:3)- Do a challenge 3 to each adjacent standing rival. HAIL TO THE PUMPKIN KING (cost Yellow:1)- Move 1. Give this character the Pumpkin King status card. WHAT’S THIS? (cost Blue:2)- Move 2 and pull any standing character Jack can see 1 space towards him.

The HAIL TO THE PUMPKIN KING status card lets that player discard the card to reduce the cooldown cost of ability by 1.

I left Jack for the end, because of his MAKING CHRISTMAS trait, as it demonstrates one of the important strategic choices in the game. If you are playing as a team, your allies can use Jack’s abilities, however, to do so that ally must have the appropriate ability token to spend. Jack’s abilities use Yellow or Blue, so if your ally uses Grey and Red they can’t take advantage of this. It’s worth noting that none of the Characters in this set use Red, and all have either Yellow or Blue tokens (but not both).

I really enjoyed playing this game. Everyone I had the chance to play this game with enjoyed it. The best description any of my players had of Funkoverse is that it’s like playing Nintendo’s Smash Bros, but analog. I feel like when (hopefully when, not if) I get the opportunity to mix in some of the other available sets, that same Smash Bros comparison is going to feel even more accurate and I love that!

You can find the entire Funkoverse, and the rest Funko Games, online at funkogames.com/ or on Facebook at facebook.com/funkogames.

One of the traditions we have here in The Rat Hole, is that to end each of our Christmas game reviews we add a bit of holiday cheer in the form of a song. Well, this game counts so enjoy this fan-created concept video of A Nightmare Before Christmas live on stage. (Hey Disney Theatrics, he’s a tenor, but did you know Doug Jones can sing?)