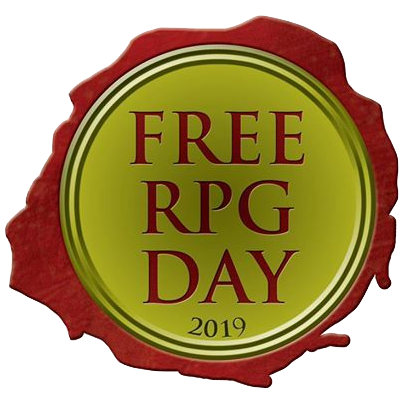 There was a time when I explicitly took Free RPG Day off work. It deserves to be treated like a true holiday. Not just a holiday, but a holiday with lots of gifts. This year I was not just booked, but double booked for Free RPG Day, but thanks to a little help from Direct-Play and Warp One Comics & Games I was still able to get a stack of goodies to talk about this week.

I was a bit surprised to see that there were three 5E compatible products available this year, and interestingly, two of them were historical.

Land of Myth: Age of Palaces (Seven Thebes) is a 5E fantasy setting based primarily in the Mycenaean period, with some anachronisms drawn in from later periods. The upcoming game takes place about 20 years after the Trojan War, but this whopping 60-page “Playtest Module” takes place at the end of that war. It focuses entirely on humans, in a world where gods and monsters were simply accepted.

Raiders of the Lost Bark (Steam Forged Games) is a short adventure for the first 5E compatible Animal Adventures game, Dungeons & Doggies. In theory, the only thing you’ll need to play is the D&D System Reference Document or Core Rulebook, but there are a bunch of expanded resources on the SFG website.

Dungeon Crawl Classics (Goodman Games) is back with another flip book. On one side of the book, we get a set of quickstart rules for the game, and when you flip it over you get an intro adventure. My only complaint with this is that adventure cover has no indication that it’s an adventure at all. The quickstart side has used the same cover for years, so trying to organize these is a bit hard.

Mythic D6 (Khepera Publishing) is the “spiritual successor of the D6 Legends games system”. This quickstart book is exceptionally quick. It distills the 276-page rulebook down to 15 pages, including pre-generated characters and very short scenario.

Outbreak: Undead (Renegade Game Studios and Hunters Entertainment) is a horror-themed game. At 40-pages the Intro Manual is the second largest book this year and has the usual quick start rules, pre-gen characters, and an adventure. I’ve noticed the horror genre has been picking steam in tabletop games, and specifically RPGs, the last year or so. It’s not my preferred genre, so I don’t really have much to say on it that I can guarantee isn’t coloured by that preference.

Kids on Bikes (Renegade Game Studios, Infectious Play Publishing, and Hunters Entertainment) is a game that’s been sitting on my personal bookshelf for much too long. They’ve given us a great little monster romp, with an ending that seems to be leading into something much more in the near future. I won’t spoil the ending, but I’m certainly intrigued.

Starfinder (Paizo) gets it’s second Free RPG Day adventure since it’s full release. Following the successful serialized plot of the We Be Goblins releases for Pathfinder, Skitter Crash continues the story of Dakoyo, Gazigaz, Nako, and Quonx. This one-shot adventure lets players build their own Skittermander characters (using the full rulebooks) or play updated versions of last year’s Skitter Shot protagonists. I’m hoping that Paizo will keep running down this path, without some of the disjointed (but still fun) missteps of its Goblin predecessor.

Pathfinder (Paizo) has also made the wise choice to bring back the We Be Goblins series. This year’s adventure, We Be Heroes?, is designed specifically for the Pathfinder Playtest edition, and should require only the smallest of tweaks to run using the upcoming Second Edition rules. It introduces four new goblins, this time from the Crookedtoes Tribe. The vibe is a bit weird, owing to the drastic character shift Goblins have undertaken in the new edition of the rules, but is nevertheless a fun experience. As I mentioned above, the We Be Goblins series was never really intended to BE a series. As a result, it went a bit off the rails. With the opportunity to reboot things into the Second Edition rules, we’ll hopefully see a more unified story in coming years.

Even though this is Free RPG Day, there are always a handful of RPG-adjacent giveaways. There were individual Starfinder designed dice (Q Workshop), a promo card for Red Dragon Inn (Slugfest Games), and a storybook for the Pathfinder Adventure Card Game (Paizo, based off the We Be Heroes module above).

If none of the official Free RPG Day products catch your fancy, remember that many companies now offer free products on their own, in tandem with the official event. For example, Endless Realms (Lunar Games) put out the free adventure Age of Aenarohk.

Set a reminder in your calendars for next June (probably June 20), and until then, go find a new game to try.

More information about Free RPG Day is available online at www.freerpgday.com or on Facebook at facebook.com/FreeRPGDay.