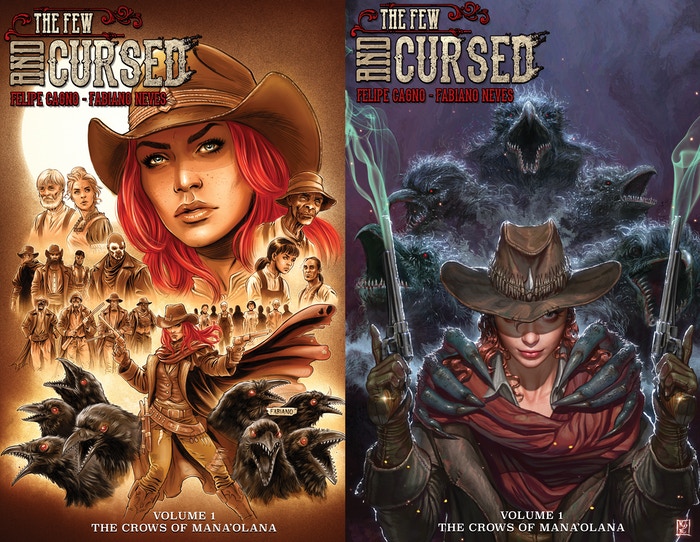 I’ve always had a soft spot in my heart for old westerns. I suppose it comes from my upbringing around a mostly rural area. As a rule, I’m not really interested in modern cowboy culture. Current events have further turned me away from the culture. But the old west of international media is not that. This was a romanticized old west of adventure and legend. (It was also chalked full of problematic content, but that’s a discussion for elsewhere.) In the same way that Victorian England inspired the genre that would become steampunk, it was this largely fictional vision of the wild west that would spawn the “weird west” genre.

What is the weird west, you ask? It varies, of course, but a great example is the Wild Wild West movie. (I’ve admittedly never watched the tv show to compare, but it’s playing in the background as I write this.) Another example that leans into supernatural and fantasy elements is the roleplaying game Owl Hoot Trail. The Few and the Cursed is an even better example, possibly due to the creator’s geographic removal from the source.

The Brazilian team of writer Felipe Cagno and artist Fabiano Neves (along with a host of colourists and letterers) have created a post-apocalyptic wild west like I’ve never encountered before. In their world, the oceans have dried up to become deserts, with water being a more valuable resource than gold. The architecture and people are mostly what you’d expect in the old west, but littered around the great pacific desert are ruins the likes a massive ship, long since without an ocean to keep it afloat.

In the tradition of, or following the trope of, Clint Eastwood’s The Man with No Name, this six-issue series follows The Redhead, or just “Red”, as she travels the desert taking jobs as a Curse Chaser. Basically, she’s a supernatural bounty hunter.

As part of the sixth issue Kickstarter, also funded was this TPB collected edition of the full story arc. I much prefer this longer format than individual issues, so was thrilled to get ahold of it as part of the background research for my upcoming review of the Rock Manor Games’ tabletop release.

The first issue introduces Red and the world she inhabits. It is a largely stand-alone tale and doesn’t go into great detail about things. Red arrives, is outed as a curse chaser, and demands a price of 2 gallons of water and a bottle of rare bourbon to rid the town of a giant snake-creature, Tsilkali. Once she defeats him she performs a ritual and he becomes human again. The End.

As the first issue of an independently funded series, the story is what it needed to be, self contained . It set up the world without setting up the need for later issues, if it hadn’t done as well as it did. The story then continues for a few more pages into what will become the ongoing story arc: The Crows of Mana’Olana. The best of both worlds.

The Crows are introduced as an ancient Maoli legend from Hawai’i Mountains. (No water, no islands. Remember?) The next 5 issues are comprised of Red travelling west to the town of Mana’Olana, set opposite flashbacks of some of her previous travels.

Following the sixth issue, there is a gallery of guest art and a pair of three-page short stories and a “Making of” look at the creative team’s process, and and a look back at the Kickstarter campaigns that brought Red to this point.

I skipped ahead in the content, just a bit, for a reason. Felipe Cagno’s introduction gives an important look at how this series came to be; he titled this foreword “A String of Failures.” He tells a tale of taking their vision to publishers, production companies, and studios. They said no. To be perfectly blunt, they screwed up. The Few and the Cursed was one of the best reads I’ve had in some time. I absolutely loved it.

It’s not perfect. But really, the only thing I wasn’t enamoured with was some of the dialogue. Most of the time it was just fine, but occasionally the heavy use of eye dialect to reinforce that “old west vernacular” just felt slightly off for me. Other than that, I would put this book against anything put out by the Big Three publishers, and would probably pick it up before most of theirs.

My understanding is that issue #7 is being worked on right now, along with the new story-arc that begins with it and I do, at some point, want to look into the stand-alone Shadow Nation Graphic Novel, and probably the Chronicles short story collection as well. Sometime over the next week or so I’m hoping have my review of the board game up and out over at TheRatHole.ca, so stay tuned for that as well.

You can find The Few and The Cursed online HERE or on Facebook HERE.