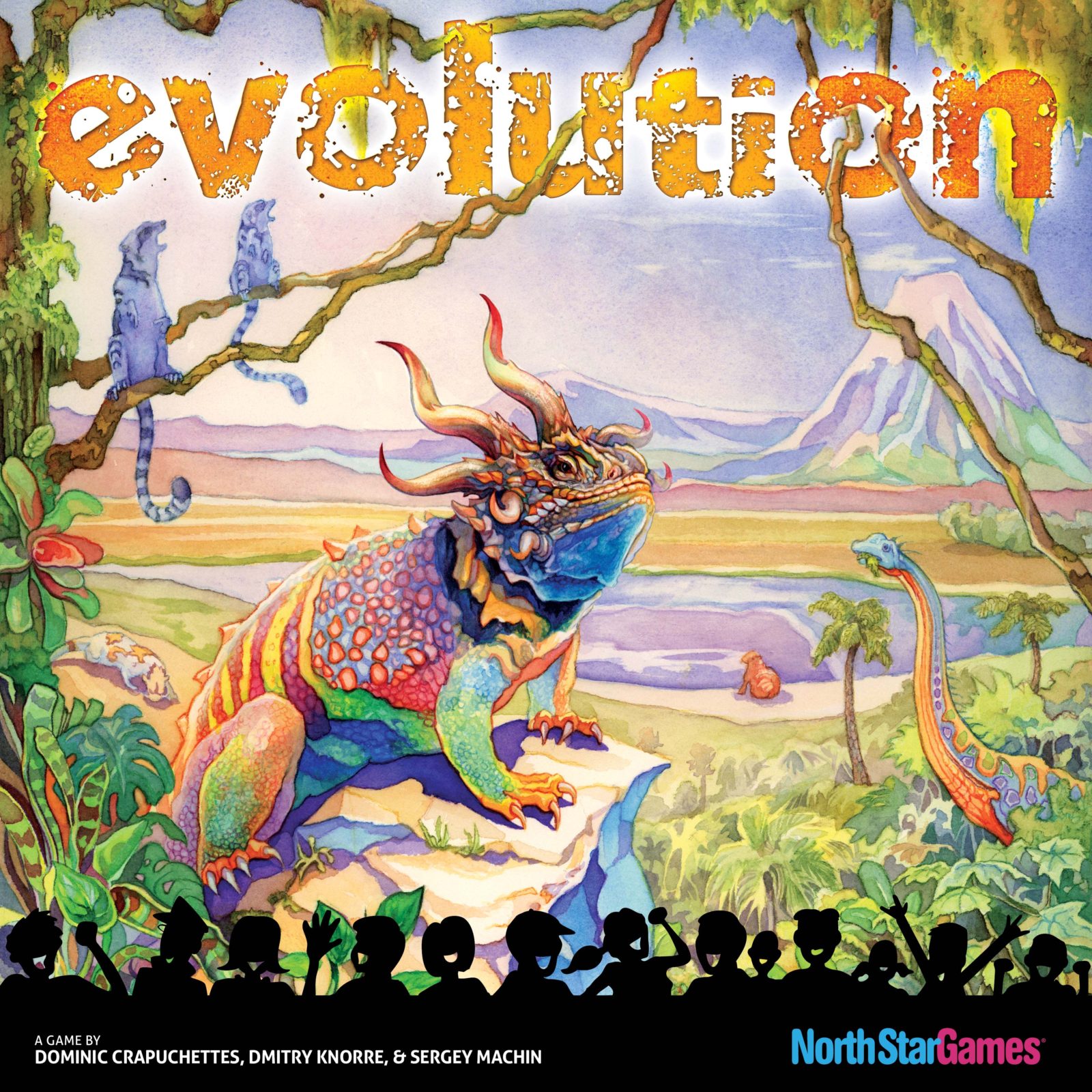 Ever heard of a Praedor Carnificis? How about Curantis Lepusculus? No? Well, these are just a handful of the theoretical scientific names of creatures that can come about from Evolution.

No, I’m not talking about Darwinian Theory here, I’m talking about Evolution, by North Star Games. Evolution is a wonderful resource management game in which you must find a balance between the semi-random amounts of food that all players share, and creating species that will (hopefully) thrive and multiply while eating those resources, and possibly each other.

Each player starts with a single Species Board, and a hand of Trait Cards and a bag to put eaten food in to keep most of your points hidden. Trait Cards have multiple functions, the first of which is food production. Each card has a positive or negative value; at the beginning of each round every player plays one card face down into the watering hole. When those cards are revealed later in the round, the values are added up to determine how much Plant Food will be available to eat.

Then, starting with the first player (as denoted by a large wooden brachiosaurus meeple), each player may play up to three of their Trait Cards face down onto an existing species or discard a Trait Card to start a new species. Cards can also be discarded to increase the population or body size of one of their species in play. Once all players have gone, the face down Traits are then revealed and applied to their species.

At this point, the first player (remember that cool brachiosaurus marker?) reveals how much food will available to eat and the feeding begins. Most species are herbivores, eating the Plant Food Tokens in the watering hole one at a time until all either all the animals have been fed or the food runs out. Carnivores, on the other hand, eat meat. Without a local supermarket around, that means they will be eating other animals. When it’s a carnivore’s turn to feed they attack another animal, with a smaller body size than their own. Regardless of whether they are a herbivore or a carnivore (omnivorous traits do exist, but are intentionally rarer than carnivorous ones) every hungry, unfed, animal in your species population must attempt to feed. Even if that means the only legal prey for a carnivore is one who’s defensive Traits do them damage. They don’t get to just go on a diet for a round.

As the game progresses species may go extinct due to insufficient food or by being eaten by the carnivores. Trait cards can be discarded and new ones played letting your species evolve to better survive.

This is a wonderfully put together game. The watercolour artwork is beautiful and compelling, with the occasional bits of simple line art being no less amazing. The components are somewhere between above-average and amazing in quality, and there is a plethora of additional information to help players learn the game. You get cheat sheets with the round order and all the traits listed, plus there is an expanded list of the traits and how they work in the rulebook. North Star Games even put together a YouTube video on how to play with a QR Code on the rulebook for it. Oh, and did I mention the first player marker is a freaking wooden brachiosaurus?

This game isn’t just fun. There is a ton of legitimate, scientific, research that has gone into the design, and the design of its expansions. Its so good that it was even featured in the scientific research journal, Nature. Just like in life, it’s nice that this game has beauty, but more importantly, it also has brains. It takes evolutionary theory and distills it down to something that even a child can comprehend. The game is labeled as intended for players 12 & up, but I played a game with a 9-year old and they not only played competently but also understood it.

Come back to The Rat Hole on Thursday, and we’ll be bringing you our thoughts on Evolutions second expansion, Climate.

Until then, you can find North Star Games online at www.northstargames.com or they are on Facebook at facebook.com/northstargames.