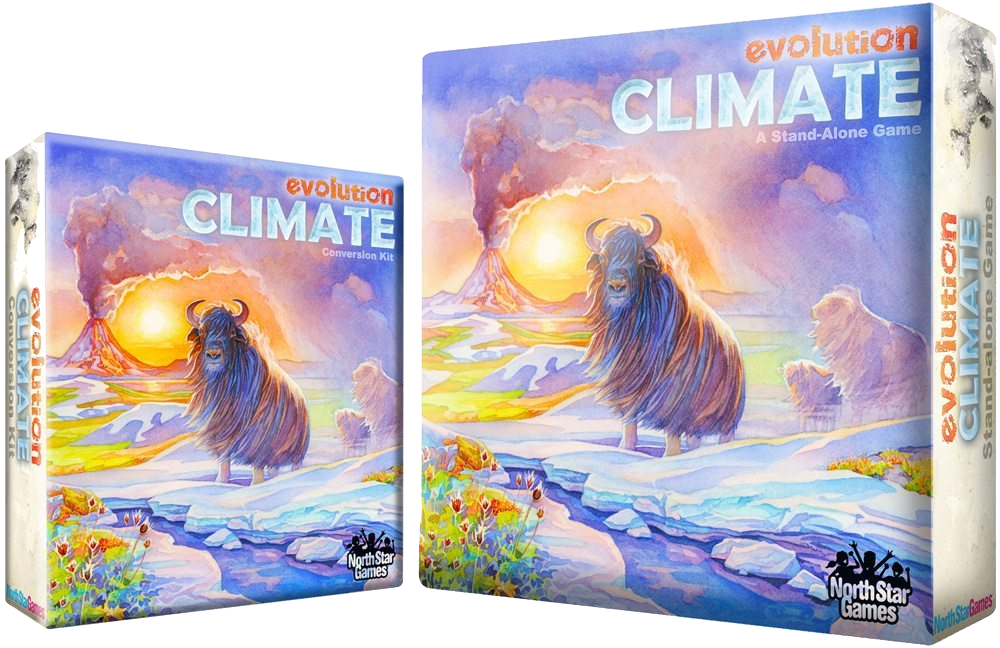 Evolution: Climate is the second expansion, for the amazing game Evolution that I reviewed earlier this week. In Evolution, you take control of a number of species, who each need to adapt to survive in a world of predators, limited food, and now a fluctuating climate.

Evolution: Climate adds several new ways to evolve your species, making every game a different adventure. It also makes some other changes to gameplay. For starters, in the original Evolution, a species could only have up to three evolutionary Trait cards on them. With the additional challenge of climate changes being added in, that has been increased to four, as has the base hand size.

The other big change is, as I mentioned, the addition of an ever-shifting climate. The normal Water Hole has been replaced with a gorgeous panoramic view of the mountains, topped with nine temperature variations. Just like the original, players each discard a card into the watering hole, to be revealed later. Each card will add or remove a certain amount of plant-based food into the watering hole. But the new Climate edition cards also have a number of either snow or sun icons. When the food cards are revealed, these icons are added up before the food is added, and the climate marker moved one step warmer or colder depending if either set of icons had a higher total. Three things can be affected by this. Plant food may grow scarcer in the cold and more bountiful in the heat (to a point), different sized species who have not evolved and adapted to the weather may start to die off, and finally a severe Climate Event could be triggered. [Fun fact: The new concepts in Climate aren’t just part of the game, they are based on actual scientific research. -dc]

Returning to Climate is the beautiful watercolor art by world-renowned nature artist Catherine Hamilton. As amazing as the gameplay for Evolution is, I honestly don’t think this game would be nearly as successful without her artistic vision, her skill, and her love of the natural sciences. [Fun fact: Her mother was a NASA rocket scientist and her father a neurobiologist. Science is in her DNA, literally and figuratively. -dc]

There are two versions of Climate. You can buy it as a stand-alone game, with everything you need in a single box, or if you already own the original Evolution you can also choose to just buy a Conversion Kit. The kit comes in a smaller box, with only the updated and new components. The one thing I disliked about the Conversion Kit, is that I already knew that the cards for Carnivore, Burrowing, Ambush, and Defensive Herding, were intended to be replaced with the newer Climate versions of those cards, but I couldn’t find that information anywhere in the rules. However, I was happy to learn that this omission HAS been corrected for later printings, and you can get the corrected rules HERE.

Another potential factor in choosing which edition is best for you is the fact that Evolution’s previous expansion, Flight, is not compatible with Climate. That is understandable, as they take on different areas of evolution, but if you own Flight (I don’t) and play it often (shockingly, I also don’t) you may want to consider the stand-alone version, just to make your games night flow a bit easier.

Climate brings a whole other level of strategy to Evolution, I really enjoyed it and so did my players. But I find it hard to decide which version I like better. They play differently enough that each stands out on different merits, but both are still great. So I’ll just let you make that decision for yourself.