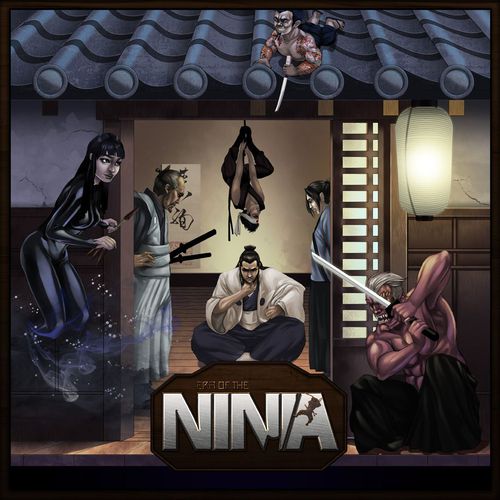 Era of The Ninja was one of the harder games for me to get played. It wasn’t personally hard, it’s a game I was looking forward to. It was hard because it’s a somewhat larger game, a potentially longer play time, a higher than average learning curve. Here’s the thing, none of those things are actually as bad as they look. The rulebook looks huge (28 pages at 8.5″ x 11″) but only about 10 pages of that are the basic setup and rules. Some of the details are a bit complex, but once you get through them you realize that it’s not that hard to play. Similarly, when you look into the box, there is an intimidating amount of components in there. But the majority of them aren’t going to be used in a game, they are there for variety and replayability.

Let’s look at some of those components because they are a lot of what gives this game it’s flash. The players all take on the role of ninjas in the feudal era of Japan. The game seats four players, but players will choose from 30 unique Ninjas each with their own stats and abilities. Each Ninja is represented by a generic miniature on the board, but also by a unique oversized player card and matching token. I really hate to refer to these simply as “tokens” because it doesn’t really convey the quality of them. There are lots of cardboard tokens for different things that come in the box, that’s not what these are. These are full weight poker chips, with the individual name and artwork of each Ninja character on it. In this case, the Ninja token isn’t used in regular gameplay but gets flipped over to establish when a Ninja is hidden from view (and possibly other effects as well).

So on top of those 30 cards and 30 poker chip tokens, there are 24 individual Lords that could be selected as the final boss for each game. Just like the Ninjas, each Lord has a generic miniature, plus its own poker chip token, its own oversized card, and its own stats and abilities. So that’s 24 different endgames with well over a hundred combinations of Ninjas to play them. That’s a lot of replayability for a single game.

Of course, you can’t just take a warp tube to the Lord, players need to explore the castle, drawing and revealing new room tiles as they go. Whenever a Ninja enters a new room, they also draw an encounter card that says who of the Lord’s army of Minions they will find there. Sometimes they get lucky and find a lone soldier but usually, it’s a small group or occasionally a gathering army. There are six different Minion types, split into three levels of strength. The weaker Minions, however, rarely fight alone. They tend to appear in groups that literally stack. How do they stack, you ask? As you can probably guess, they also have poker chips. Each Minion type has a separate miniature and poker chip token that get stacked together as a group, buffering each other’s power. It’s a really neat concept, that adds a ton of challenge to the game.

The gameplay is semi-cooperative, there are a lot of situations where working together is both possible and a good idea. If another player gets slaughtered, you may be the next target so some friend help is likely warranted, but at the end of the day, only the Ninja that defeats the Lord will actually win.

There are a lot of advanced rules and game modes that can be added in, like Ninja vs Ninja combat, Reinforcement rules that allow players to keep playing after their Ninja is killed, and various clan-based cooperative rules. You can also play a solo game. The rules don’t change drastically in a solitaire game, but there is a recovery phase in group play that the Lord and his Minions skip, making it a little bit easier. I would also recommend removing a few of the harder minion cards from the deck the first few times you play, especially if you are going at it alone.

The game is a lot s of fun, and very challenging to play. While it is far from perfect, most of its flaws tend to be the result of going for higher quality, not trying to cut corners. Some of the Ninjas and Lords could easily have been stripped out of the base game, especially the ones that have extra rules that necessitated additional components specifically for them alone. Did every Ninja and every Lord need its own poker chip, or would a small handful of less specific ones have worked? But having all that extra stuff in there definitely adds something to the game, and takes it to the next level, even if it makes your first look in the box a bit overwhelming.

Era of the Ninja was a ton of fun, one of my earlier groups want to pull it out again, now that we have a better idea what we are doing. Mythical Eras of War is working hard on the first expansion, called Kami and Mahou, and I’m possibly even more excited for that to come out than I was when I first saw the original. It’s not a game that most groups will just pull off the shelf for a quick game, but it’s completely worth the time to learn and make a night out of it.

You can find Mythical Eras of War, Games online at www.mythicalerasofwargames.com they also seem to have a Facebook page, but it doesn’t look to be in regular use.