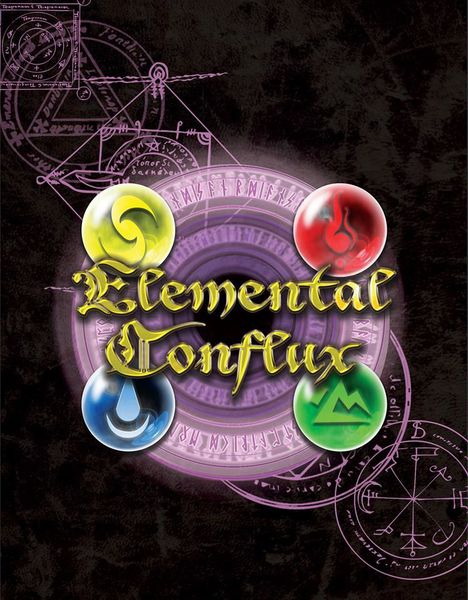 What is the first thing you think of when I say “magical duelling”? Depending on which generation you grew up in, your answer will probably be Magic: The Gathering, or Yu-gi-oh. There’s nothing wrong with either of these games, or should I say franchises. I had a lot of fun playing M:TG with friends. Until the constant new editions, new rules, and rule changes overwhelmed me.

So what do you do when you want to duel, but you don’t want to get bogged down in the collecting aspect of Collectible Card Games? You look for something simple, something you can play right out of the box. Something like Elemental Conflux, by Pointy Hat Games. Now, I’m not going to claim that this game is in any way comparable to a CCG. There’s nothing near the same level of complexity, strategy and tactics. But you don’t always need to be strategic. To make an analogy, sometimes you’re in the mood for a great steak, and sometimes, you just want a hamburger.

What is Elemental Conflux? It’s a two-player game where you and your opponent are “Grand Summoners”, bringing forth armies of creatures (and the occasional spell) to gain dominance over the Elements, and change (ie Take Over) the world. In this game, there are five elements: Earth, Air, Fire, Water and Spirit. Whoever controls 3 out of the 5 elements wins. In each round of play, you are battling for control of one Elemental Node. If you win a round, not only are you one step closer to winning, but you also get an advantage for the rest of the game. For Example, if in the first round you win the Node of Fire, then for the next rounds, any Fire creature you control gets +2 strength. And in this game, strength is everything; except when it isn’t. We’ll get into that more later.

The game has three types of cards: The Elemental Nodes (which I already mentioned), Creature cards, and Spell cards. The Creature cards will form the armies with which both players will battle. Unlike in many other duel games, creatures have no defense stats, only a strength number between 0 and 10. Some creatures also have special abilities: for example the Summoner adds a random creature card to your current army; The Elemental Lord reduces the strength of all the creatures of a certain type in your opponent’s current army; the Wizard lets you draw an extra spell card and switches the armies of both players. But the most powerful creature that you can summon is a Dragon. If one player has a Dragon in their army, they automatically win the battle, regardless of the total strength of each army. There are only two ways to defeat a Dragon (well, technically 3). If BOTH armies have a Dragon, then they cancel each other and the winner is determined by the strengths of the other creature cards. If you have a Genie in your army, then you can banish your opponent’s dragon. Finally, if you play Wizard and trade armies, then whoever now controls the Dragon wins.

Spell cards have a wide variety of effects: increasing or decreasing the strengths of certain cards; adding or removing cards from armies; moving around entire armies, etc. Each player gets 2 spells at the beginning of the first round, and 1 spell at the beginning of each round after that. Spell cards will state when and how they can be used.

Each round goes through several stages. You start by deciding for which Element you are battling. Next, you draw a single creature card to determine Initiative; winner of Initiative decides if they want to Attack or Defend this round. Each player then receives 10 creature cards and 1 spell card (2 if it is the first round of the game). The next phase is Army Building: Starting with the Attacker, each player chooses cards to create 5 armies. You must create one army at a time; there are no limits to the size of an army, but you must be able to build 5 armies with at least one card in them. You each take turns placing your armies face down on the table in front of you. Each army will fight the one directly across from it (unless a card effect moves them). Once you place an army, only a card effect can change it. Finally, after all armies have been chosen, Battle begins. Each player reveals their cards, and the army with the highest total strength wins. In the event of a tie, all cards are discarded and no one wins. It is possible to play a spell card during any one of these phases. All 5 battles constitute one Conflict; whoever wins the most battles wins the entire Conflict and earns the Elemental Node. If no one wins the Conflict, then you must battle for that Node again. As I mentioned before, whoever controls 3 Nodes wins the game.

The main complaint I have about this game is the rules sheet, which somehow manages to make things more complicated than they need to be, while at the same time omitting important information. I had to read the single page several times to understand all the stages and special abilities. And yet, even after playing multiple games, we never did figure out whether or not unused spell cards were kept or discarded between rounds. You could House Rule this either way; we decided to keep our spells through the whole game. Despite this bit of poor writing, this is a fun, simple little game. It would be a good “intermission game” between more complex game sessions, or a time waster to keep in your pocket.

You can find Pointy Hat Games on Facebook at facebook.com/PointyHatGamesLLC. As of this writing, their website is offline and being completely rebuilt.