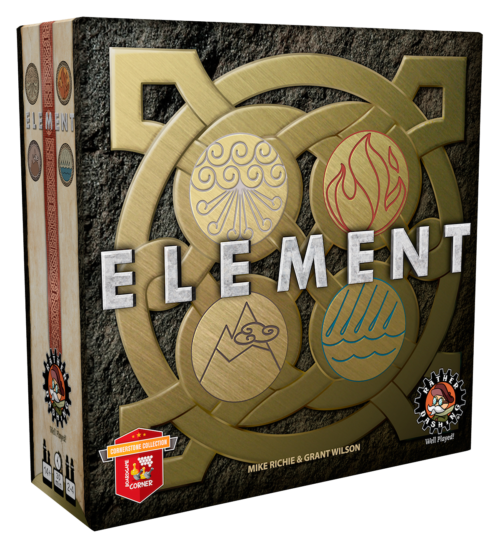 Let’s start with the basics, Element is a unique abstract strategy game from the fine folks at Rather Dashing Games. It plays fairly quickly, and it’s recommended age of 14+ is based solely on the complexity of the strategy.

I actually waited to play this game with a couple different groups before reviewing it, to see if both groups had similar experiences. One group appreciated the game, but it’s wasn’t the type of game they necessarily prefer, while the other group loved it. What both groups had in common was the feeling that the learning curve is a bit steeper than average but that it’s worth the time it takes to get everything in your head.

Each player has a Sage pawn that represents them on the board. if your Sage gets blocked in and has no legal movement options, you lose. To block a Sage, you get to draw and place up to four stones a turn from a bag. You get one space of movement for your Sage, and can get an additional movement for each stone to choose not to draw at the start of your turn. That’s the simple part.

The stones come in four colours, representing the four elements. Black for Earth, blue for Water, red for Fire, and grey for Air. When placed, each element affects play differently. Earth blocks movement, but a sage can still move into an empty diagonal space until a second Earth stone is stacked onto a previously played stone to create a solid mountain range. Water flows, when you place a Water stone next to an existing one it creates a river; with every piece in that river moving into a new pattern on the board. Fire spreads, so when you place a Fire stone next to an existing one, another Fire stone gets placed opposite it. Air is the only piece that does not block a Sage, instead, it allows a Sage a free action to jump over that space (or spaces) as long as the landing space is unoccupied. On top of the individual rules for each element, there is also a circular Rule of Replacement. An Earth stone can replace a Water stone on the board, a Water stone can replace a Fire stone, a Fire stone can replace an Air stone, and Air stone replaces an Earth stone (as long as it has not become a Mountain range).

The rulebook dedicates two pages to each element, complete with multiple examples, and once you get the minutia of how each stone works, the game moves along at a reasonably fast pace for such a strategic game. But as strategic as this game is, just from the movement and stones, the strategy gets deeper in a 3 or 4-player game. In a 2-player you are obviously trying to block each other; but for more players, you are only trying to block the player to your right. If you inadvertently block in the wrong player, you forfeit your victory to the player whose goal you just accomplished. It also means that the player that you are trying to defeat is not the player who is trying to defeat you. Being forced into a battle on two fronts makes the game play completely differently and adds an incredible amount of fun and challenge.

Once you get through a game or two and understand how everything works, this is an amazing game. The components are all very well made, giving the game a wonderful physical feel. The very simple components counterbalanced with the very ornate Celtic inspired artistic design was a bold choice that worked extremely well.

Not everyone loves this type of game, I get that. If you like a good abstract strategy game, Element is a game for you. If you like a GREAT abstract strategy game, Element is still a game for you. If I were to make a list of some of my favourite games in this genre, Element would probably be in the top three. (That’s just off the top of my head because I’m not actually making that list.)

You can find Rather Dashing Games online at ratherdashinggames.com or on Facebook at facebook.com/RatherDashingGame