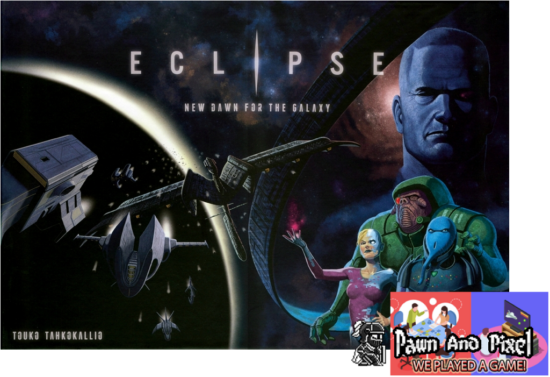 A few weeks ago, Dave got to sit in with the Pawn and Pixel team for a game of Asmodee’s Eclipse. You can click HERE to read everyone’s thoughts, but Dave’s are below.

Eclipse. It seems like a million years ago, not a week. I think my biggest memory of playing Eclipse with the Pawn & Pixel team is that I played like crap. Despite my constant misjudgment, I somehow managed to come in a very close second place. More importantly I had a ton of fun the whole time.

The game itself is one of the more elegantly designed monstrosities on the market. It’s a big game, and it takes a long time to play. But once you get moving, it MOVES. Time flew by and I would be happy to play it again soon. Playing these larger games is something I don’t get to indulge in nearly as often as I’d like and if you’ve never really been interested in long games, Eclipse is something you should take the time to experience.

Asmodee can be found at asmodee-canada.com or on Facebook at facebook.com/AsmodeeCanada.