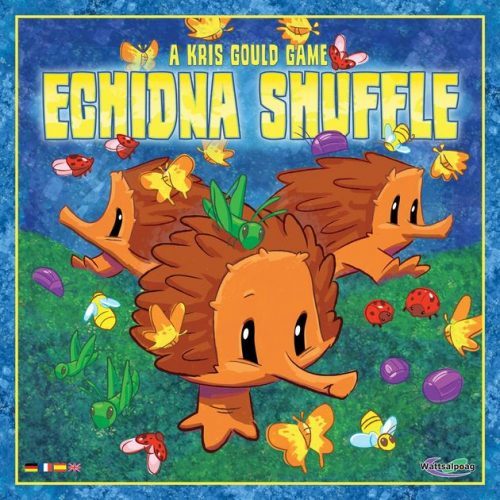 Last year I would have had the opportunity to play this with way more people at more player counts. Unfortunately, things here in Alberta aren’t going well and stricter measures are being put in place as the death toll from COVID-19 in Canada has now exceeded 10,000; more than 10x that of the average flu season. Regardless of your stance on this pandemic, outside of working for this site many of our Rat Hole family, and extended family, are either medically high risk or work in higher-risk occupations. Thankfully I was still able to play some Echidna Shuffle before things took a turn for the worse. If I’m sitting here complaining that I can’t play a game more, I don’t think I need a spoiler warning if I say upfront that I enjoyed it. So let’s hop aboard an echidna, and talk about Echidna Shuffle from Wattsalpoag Games.

The hardest thing for this conversation is where to start. So, I’m going to start with the biggest and most obvious thing about the game. The main game components are 12 palm-sized plastic Echidnas. They are the sort of thing that if Wattsalpoag sold them separately, they would probably make as much money as they do on their games. They are super high quality and adorable as [explative]. Game components can be very specific, and hard to compare against each other, but these little suckers are probably the best game component that I can remember playing with EVER. O…M…G…

The rest of the components are of similarly high quality. There are six different plastic bug colours/designs (red Ladybugs, orange Butterflies, blue Ants, yellow Bees, green Grasshoppers, and purple Beetles) with matching coloured tree stumps and a custom 6-sided die that rolls a 2-7. All of the cardboard markers and two-sided boards are also higher than average quality, with it all coming together to make this a visual and tactile pleasure to play.

How the game setup works, is that all 12 echidnas are all randomly placed on the board, players then mark an open space as their “pickup point” and the player sitting next to them gets to place their treestump goals anywhere on the board they choose, with the only restriction being that you may not have two of the same coloured stumps on the same space.

On a player’s turn, they roll the die, put a marker on the Number Board, and then move any number of echidnas that number of empty spaces. If another echidna is in the way, they must be moved to an empty space first. Echidnas aren’t exactly known for their jumping skills. On their next turn, that player won’t roll the die again, but rather move their marker on the Number Board down to the opposite facing die number than they previously rolled. So if they rolled a 2 they would get two moves and the next turn they would automatically get seven moves, conversely, if they had rolled a 7 they would only get two moves on their next turn. This is an absolutely brilliant mechanic that balances the randomness of dice rolling, without removing the competitiveness that variable movement brings, and also creates some interesting strategic opportunities.

When an empty echidna stops on a player’s pickup point (on that player’s turn) one of that player’s bugs are placed on the enchilada’s back. When that echidna stops on a space with a matching stump (even on another player’s turn) the bug jumps off and both the bug and the stump are removed from the board. The first player to have all three of their stumps removed from the board wins the game. Simple.

Simple, but also surprisingly challenging. It’s rare to find a game that says ages 6-adult that is legitimately fun for players 6-adult, especially at the same time. You can 100% play this with younger players and the level of challenge for an adult may not even change that much. There are only so many legal moves, so even a player too young for “strategy” has a near-equal chance to mess up a very strategic player’s gameplan. At the same time, a group of more strategic players can make for an adorably cutthroat game.

There are two sides to the gameboard, the forest-themed side that features an outer circle that connects to three inner circles which form a central circle. The movement is all in a single direction, except where the circles intersect allowing a choice of paths. On the flip-side of the board is a snow-themed board that features a slightly different circular layout and more complex choices in the directions an echidna may be moved.

The board is already very large and very tightly packed, but I’d love to see Wattsalpoag come out with some expansion boards, in the same way that Kill Doctor Lucky did, changing the play experience without actually changing the core gameplay mechanics. Another option would be a larger board packaged with extra components to maintain the balance (or even add more players)

[Edit: Between writing this and it going live, Wattsalpog posted a teaser look at the upcoming digital edition of Echidna Shuffle that includes –you guessed it– a new board layout. Does that mean there will be a physical version coming? Obviously not, but maybe. -dc]

I don’t care that this review is done and out there; I NEED to play this game at a full six player-count when it becomes safer to get together again. This is one of those games from a smaller publisher that deserves WAY more attention.