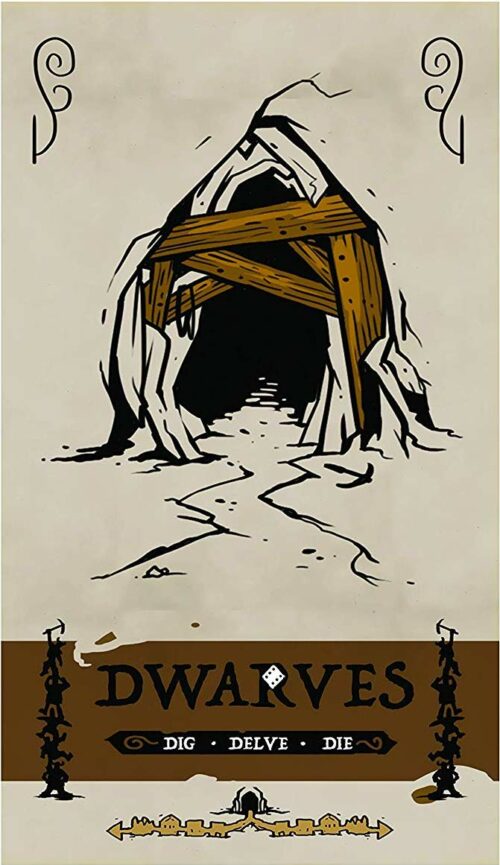 It’s been a busy few weeks in The Rat Hole, so instead of trying something new, I took some inspiration from the Marie Kondo craze, and pulled out a game that still sparks joy.

December of 2015 was the first time had the opportunity to review Titans Tactics from Imbalanced Games. It quickly became one of my go-to games for two players, and I reviewed it again after opening The Rat Hole. When I learned that Imbalanced Games was working on a new game I was excited to see what was coming. What was coming, you ask? The answer, my friend, is Dwarves – Dig, Delve, Die. A game of dice DWARF placement for 3-6 players.

The rules are ridiculously simple. During setup the “Dig & Delve” card is placed to the left of the mine deck, then each player takes one dwarf/die to start. On each turn, a player draws 1 new die and rolls it along with any dice they acquired in the previous turn. They place all of their dice on the location cards, or on the top of a stack of dice on a location card. The location card(s) that show the lowest valued dice are resolved, and those dice collected by the player to roll and place again next turn. The first player to collect five gold nugget cards wins.

There are normally 20 cards in the Mine deck, plus the starting Dig & Delve card. But there is also a three card drinking expansion. It was slightly frustrating when I first opened the game, because there is no real note that those cards exist, or what they mean if you don’t realize they are meant for drinking. If you don’t want to use them, remove the cards that refer to emptying your mug. The times I have used them, we house ruled that a player only needed to take a gulp, not slam their whole drink.*
[*As always, if you choose to include alcohol in your game, please do so responsibly. -dc]

The entirety of the rules fit on all of two cards. While this is nice, something a bit more substantial would probably reduce the need for the online FAQ, and solve some confusion around the drinking cards. Even so, this is a game that’s easy to learn and fun to play. I definitely recommend checking this out. Dwarves- Dig, Delve, Die is incredibly straightforward, and therefore so is this review.

You can find Dwarves- Dig, Delve, Die online at www.titanstactics.com/dwarves.html or on Facebook at facebook.com/DwarvesDDD.