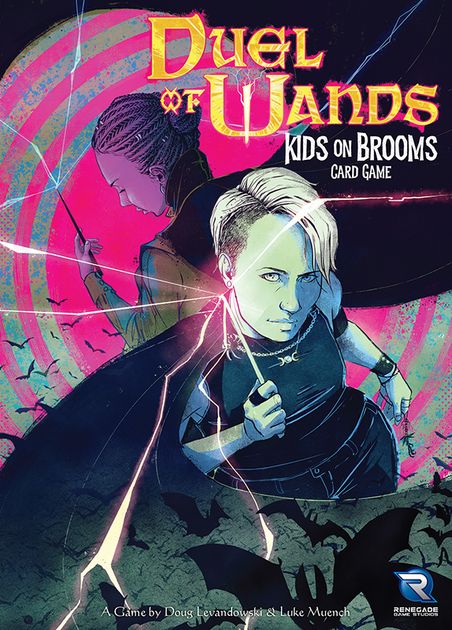 As this review first goes live, I was supposed to be at the IQA Quidditch World Cup. Yes, really. After being postponed a year for the pandemic, it was cancelled late last year amidst continued civil unrest in the United States and still-fluctuating international travel complications.

Still often referred to as “muggle quidditch” the full-contact sport no longer has much more than a cursory connection to its original source material, and while that material magically sprang fully formed into the world without an author, the inspiration is obvious. Duel of Wands is a few steps farther removed, but nevertheless comes from similarly evident inspiration. Just to work backwards a bit, Duel of Wands is based on the Kids on Brooms roleplaying game, itself a magical spin on the Kids on Bikes RPG (which draws from the same ’80s nostalgia that Stranger Things does.)

But this is a card game that is nowhere near being as in-depth as an RPG. It is a fast and simple head-to-head game. Each player starts with a deck of identical spell cards, add to that a pair of unique spells that are randomly dealt from seven possible cards. There is also a set of upgraded spell cards and each player can swap out two basic spells for their upgraded version at the start of the game. A game is usually the best of three rounds, with the loser of a round getting to upgrade an additional 2 spells.

The box lists a 30-45 minute length, and honestly that’s a super high estimate. Even with a slow first game, learning the game and what all the cards do, we played that best of three and a best of five in under 45 minutes. It moves fast. Each round ends when either player can’t draw a card, or their “Psyche” card is placed in the casted or banished card area. Generally speaking, you want to mill your opponent’s deck down before they can do the same to you.

While this is a standalone game, it can be used to enhance the Kids on Brooms RPG. There are a couple of suggested adjustments to assembling a player’s starting deck, and suggestions on how best to integrate it into the narrative of the game. I don’t know Kids on Brooms (or Kids on Bikes) in any meaningful detail, but this sort of integration rarely if ever results in anything short of a better gaming experience. It also creates a built-in source of expansion material if the creators wanted. The base game is great on its own, but the limited scope could eventually leave some players wanting more. It’s a small enough game that expansions would only need to be booster pack sized to significantly expand the customizable opportunities, and there is plenty of space in the box to add more stuff.

I really have enjoyed this game, and look forward to pulling it out for a mini-tournament with my quidditch teammates now that we can safely gather again.