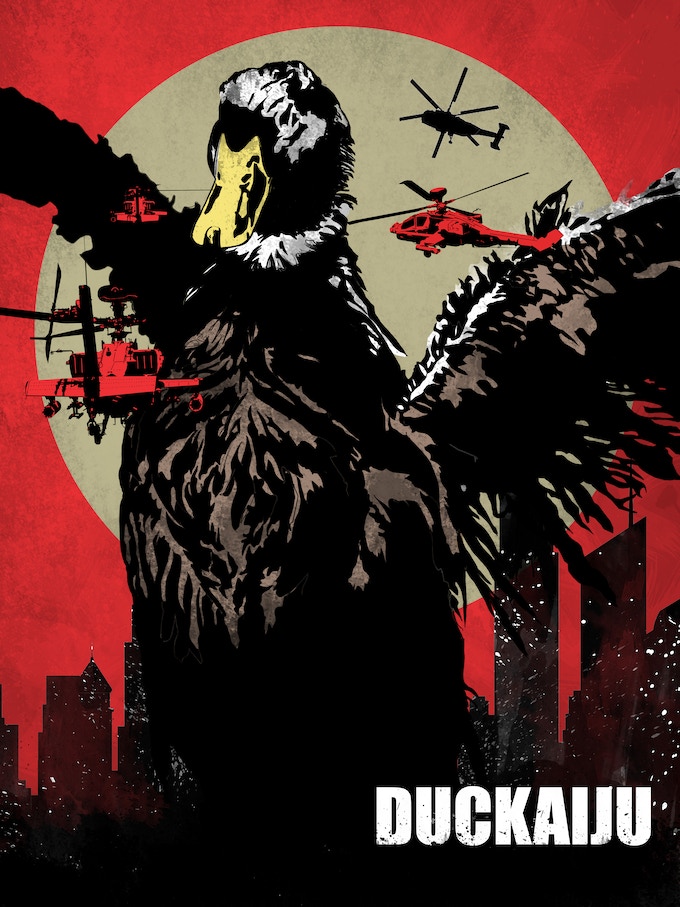 I have spent most of the past three days trying to figure out how to write this particular CrowdFUNding Spotlight. The game looks fun, although it could stand to have a bit more backstory revealed. But the campaign itself is… interesting. So interesting that I guess that’s the place to start.

Most crowdsourcing campaigns follow a reasonably solid format. The details may differ, some use comedy, some use gameplay examples, others have a ton of big name reviews (I’ll get there too, someday…). But the entire point is to entice the person looking to become a backer.

The Duckaiju™ campaign does none of that. The game is legit, but everything on this campaign is designed to basically troll its potential backers. The video is unhelpful, there are spelling errors, grammar errors, missing information that is “coming soon”, no FAQ, and basically everything that everyone hates in a crowdfunding campaign. They are quite upfront about that being an intentional choice, but if it had launched two weeks later I still would have thought this was an April Fools joke. As near as I can tell it is not.

Ridiculous brain breaking campaign aside, the game looks interesting. The goal is to collect Duckaiju™, Acolytes, Devout cards, and Kaijuice, all of which are worth points. Here’s the catch, if you end up with the too much, or the wrong balance, of these things, you may end up having to collect a Kaiju™-Bean (think “rabbit raisin”) that is worth negative points.

The art for the game is dark, moody, and very evocative of the strange world that players will be stepping into. It reminds me of some of the classic Teenage Mutant Ninja Turtle artwork, with lots of shadows and just a bit of accent colour. There is more colour than the old TMNT, but it has a very similar feel.

There are only three simple pledge levels for this campaign. $14(USD) gets you the game, $41 gets you the game and hooded shirt with Duckaiju™ art on it, and a Christmas card sent out. $130+ gets you all that plus your picture in the game, created by the artist. There are some add-ons, and there will be stretch goals added to all of these as well, but they haven’t been announced because of course they haven’t. I am strongly considering backing this game just to have a bunch of Christmas cards sent out for me.

If you can get past the… unique… method of presenting this campaign, it looks like a good deal and a fun game. Silver Lake Games has successfully funded and delivered games in the past, so they do have some credibility built up. If this specific campaign doesn’t fund, I wouldn’t be at all surprised to see it come back with a goal less amusing than its current $3333 (USD) goal. But I would also love to see this fund this time because the whole thing is just odd. I like odd.

You can find Silver Lake Games online at www.silverlakegames.com or Duckaiju™ on Facebook at facebook.com/Duckaiju