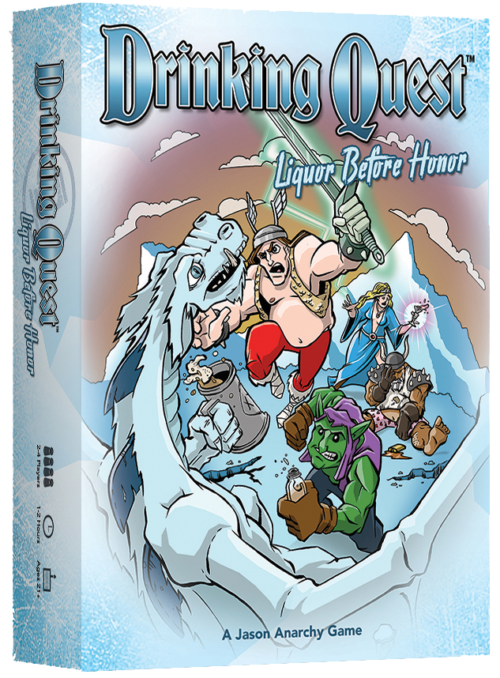 [While Drinking Quest is a “drinking game” it may be played with or without the consumption of alcohol. If you choose to include alcohol in your game, please do so responsibly.]

The heroes of Drinking Quest: Chuglox, Daiquirin, Bartlebut, and their Annoying Sidekick, have returned from their Journey into Draught. Not only have they returned, but they have brought their new friends: Chuglass, John Belloy, Terry Flagon Smash, and Sexy Cthulhu. blink blink Sexy… Cthulhu… I need a drink already. So pour yourself a tasty beverage, and let us look at Drinking Quest: Liquor Before Honor!

At its heart, this is a simple roleplaying game where the GM is a small deck of cards. Each player chooses a Character card, along with that character’s matching Signature Drink card, and a blank character sheet. Just like any good RPG, you’ll be recording the ups and downs of your stats on the character sheet starting with the information on the Character Card you chose. At the end of the game, the winner is the player with the most XP (eXperience Points) gained from defeating the challenges they encounter.

On a players turn, they flip the next card in the quest and resolve it. If it’s a Monster, you fight to the death. If you win, you live and get the XP and Coins for that monster. If you lose, you get nothing and die. Fear not, for if you die the gods may yet still smile upon you simply chug your drink and you shall be reborn in time for your next turn. If you die again in the same quest, the gods only ask for three simple swigs of your drink to grant you another chance to entertain them. (Seriously, no one wants you to chug another drink that fast.) If the card flipped is an Event card, that player will need to make a save roll based on one of their listed character stats. If they roll successfully good things and hilarity, ensue. If they fail, bad things happen, along with even more hilarity.

The success of the Liquor Before Honor crowdfunding campaign was successful enough to add four more characters to the game. Those four new characters are completely backward compatible with Journey into Draught, but that’s not all. The four original heroes have different stats and different Signature Drinks between the two games, meaning there are effectively 12 characters to choose from between the two games. That being said, I would still keep to the 2-4 player limit. Each quest only has 12 cards, and a two player game recommends only using 8 cards, so extra players could screw up the balance somewhat significantly. To get around that, the game includes alternate rules for a fifth “GM” player, and for having two players share the fate of a single hero.

Some of the other upgrades that this game has gotten over previous entries include a higher quality shop card and a fabric map rather than a vinyl one. Both quality upgrades are a welcome touch. The store is a fairly important part of the game, but maps aren’t they are just there for fun. Let me be exceedingly clear here, the map has zero impact on the game. Why am I being so clear? Because I recognize that my next comment is stupid and petty and has nothing to do with the actual gameplay. The cartography on this map doesn’t match the previous map, and it drives the detail-oriented nerd in me crazy. Growl.

The Drinking Quest series takes the RPG experience and distills it down, like good spirits, into something just about anyone could play. If it wasn’t a “drinking game” this could even be played by kids, so if you’re looking for deep strategy and serious roleplaying, you’re in the wrong place. If you just want some fun dice rolling and goofiness with friends, this is the game for you. To be perfectly honest, if Jason Anarchy adapted this series into a larger scale RPG, I’d be there in a heartbeat. (I would suggest the nice, simple, BEER system from 9th Level Games’ Kobolds Ate My Baby. Because BEER. )

I really do enjoy the Drinking Quest series, alcohol or no alcohol, it’s a nice easy game with a heavy helping of humour.