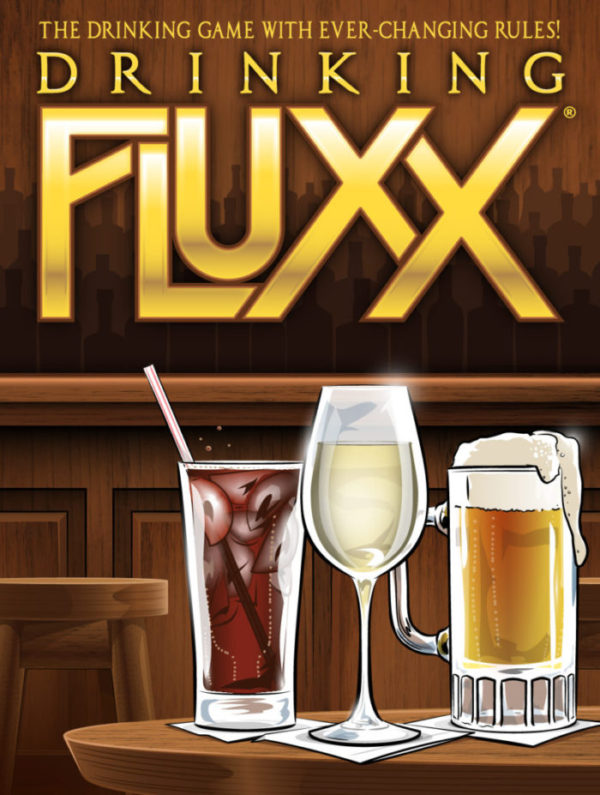 Over the course of its 21 years on this planet, Fluxx has seen and continues to see, a myriad of alternate, family friendly, themes. Drinking Fluxx, like its older sibling Stoner Fluxx, is obviously not intended for younger players, the game is of legal drinking age and you should be as well. Everything in the rules, and on the cards themselves, discourage illegal or unsafe activities. Remember, you never need to drink alcohol to participate in Drinking Fluxx. If you choose and are legally allowed to partake in such activities, please make good life choices by designating a driver before beginning and switching to water when you’ve had enough.

Every game of Fluxx starts the same, with two Basic Rules: Draw 1 – Play 1. That’s everything. Inevitably a new player wants to know how you win, but at the start of the game, there isn’t one. As the game progresses new rules are played that change things like the Draw – Play rules, put a new winning condition into play, or just about anything you can think of. Generally to win a player needs to have specific Keeper cards in play, and no Creeper cards in play (unless specified by the Goal). Goal cards could change at any moment, throwing certain victory into the thirsty jaws of defeat.

For Drinking Fluxx, most of the Keeper cards are snacks, drink components, or otherwise consumption-related. Goal cards are often, but not exclusively, mixed drinks. The Goal Mai Tai requires you to have the Keeper cards Fruit juice + Rum. Other Goals are unexpected but highly applicable, for example, I’ve Got A Ride needs The Bar = Designated Driver and No booze for me, I’m Driving needs Designated Driver + any of several non-booze drink Keepers.

Aside from just collecting Keepers to attain a Goal, there is a slew of other great New Rule cards and Actions. Rules like Toastmaster require players to propose a toast on their turn, Roshambo Drink makes you challenge another player to a game of Rock, Paper, Scissors with the loser taking a drink. Some of the actions are just goofy, like Passed Out, which forces a player to hold the card against their forehead until their next turn. Others like Switch to Water suggest a player replace their current drink of choice with water and draw extra cards for the change.

One of the nice things about Fluxx games is that they all have a very clean visual design. You know at a glance exactly what type of cards are in your hand and what’s in play. That minimal learning curve, ease of awareness, and constantly changing winning conditions, it’s very easy to let a new player join in the fun. No player is ever truly “ahead” so suddenly having six players instead of four does change the balance of play.

There are few games in the world as entertaining as Fluxx. You never know what to expect, and a win could happen at any time. It’s irreverent, intelligent, a little insane, then you add the option of alcohol, and you have a night you’ll never forget (or possibly never remember, depending on your personal choices). Even if this version of Fluxx isn’t your mug of beer, there are other great options to try out.

You can learn more about Fully Baked Ideas on their website fully-baked-ideas.com or on Facebook at facebook.com/FullyBakedIdeas.

[BONUS VIDEO: After a few rounds of Drinking Fluxx Andy and Kristen Looney talk about the creation of Fluxx.]