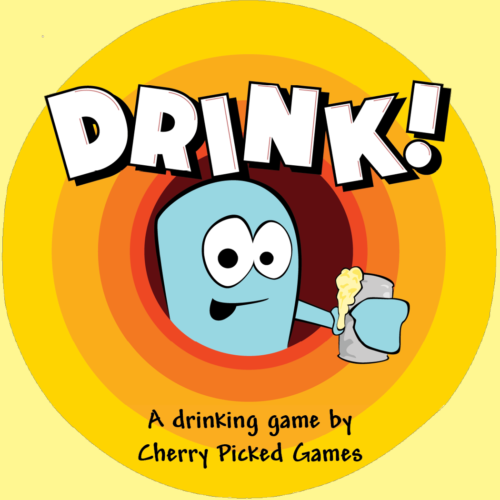 Drinking Games are an underrepresented genre in reviews I think. There are obvious reasons for that, so let me start by saying that no drinking game requires you to drink alcohol. If you are not of where you live, or simply don’t want to have alcohol, don’t. If you choose to drink alcohol, do so responsibly, and dear bob don’t pressure people who don’t want to.

Drink! is a great little party game, that you can play at the same time as you otherwise just go about your evening. Everyone starts with a card that has a specific action, behaviour or phrase on it. Whenever someone does what your card says, you can wait up to 10 seconds and call “drink” without saying what your card says. If any player can guess what your card says, they take your card and you draw a new one. Cards that have won may still be called, but they are public knowledge and the calling player should also say why so people don’t try to guess those cards.

The game ends whenever people decide to stop. The winner is the player with the most cards, the runner-up is the one who drank the most (even if they just drank water).

The game is so simple, yet so much fun. You can play without interrupting the flow of conversation or other activities, and watching people trying to figure out what they did is a blast. Some party games can be overwhelmingly social, making more introverted people feel excluded. As long as you don’t randomly get a card that lets you unfairly target someone (and you’re not being a dick if you do get one) then the game stays comfortable for everyone, which is always the best way to people.

The rules are short and straightforward and even has some helpful tips. Switching between booze and water, for better mornings, is a great tip. I vehemently disagree with the claim that Long Island Iced Teas are always a bad idea, more predominantly vodka-based beverages however…

From what I recall, Drink! made for a great night! (Kidding, I was vaguely responsible and was even up to make people breakfast in the morning.)

You can find more from Cherry Picked Games online at www.cherrypickedgames.com or their Facebook page at facebook.com/CherryPickedGames.