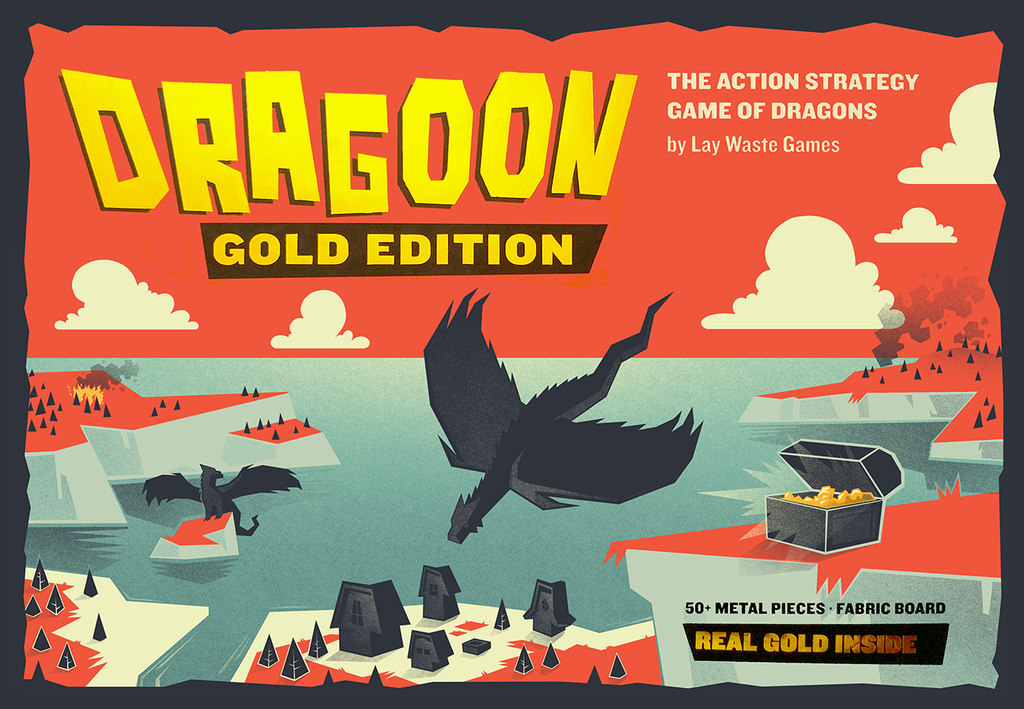 I always try to remember that I live a bit of a charmed life in many ways. For example, as a reviewer of tabletop games, I get to play all sorts of games while spending time with my friends and watching their own excitement and enjoyment while we play. Sometimes those games are a tabletop one-night stand (if you’ll pardon the expression), while others I would play again in a heartbeat if I had more time. Sometimes, a game even crosses my path that actually creates a visceral connection inside me that I can’t explain. Dragoon is one of those games, and since it’s my job to explain it, I’ll try.

If you follow our Instagram and Facebook pages, you may have noticed Dragoon getting a lot of mentions recently. Even I will admit that it’s been a disproportionally large amount of coverage. But somehow this is a game that just speaks to me and has since I first saw it.

The gameplay itself isn’t difficult. The first step is to find where the humans are building a new village. Simply roll the two dice, and either place a new village at the matching coordinates on the map or upgrade a village to a city if one is already there. Each round the humans will build or upgrade one village for each player, plus one more.

Then each player gets to take three actions on their turn, with the player in last-place determining who goes first. First, you draw a card, then you can move, you can claim or destroy a human settlement, you can steal gold from another Dragon or the Theif’s Treasure, or discard and/or draw more cards. Playing a card from your hand is a free action.

The final step is to roll a single die to determine how much gold the villages and cities each Dragon has claimed will pay them in tribute.

There is some obvious strategy involved in how you choose to interact with the board and with the other players. That being said there is a lot of random luck involved, as well. An unlucky set of population rolls could see all the humans populating around a single Dragon’s cave, or a bad shuffle could leave another player with very few usable cards, while another player’s cards are bordering on overpowered. My general answer to that scenario is “let’s play again and see if it works out better for you”, but to some people that level of luck compared to strategy is a full stop no. That’s totally fine, this game may not be for those people. Everyone has personal preferences, even me.

Where Dragoon really shines is the production value. When I say shines, I mean that literally as well as metaphorically. Most of the components are made of metal, finished in real gold, silver, copper, and black nickel, with the board itself being a beautiful, thick, cloth map. The art and dragons sculptures have a distinctly retromodern style, that I generally adore. This game easily lands in my top five modern games for visual and tactile appeal.

One of the reasons I’ve been pushing this game out there is that Lay Waste Games is about to close the preorders for the reprint of the Gold Edition of Dragoon, as well a new, lower cost, Standard Edition, with plastic components instead of metal. On top of that they are releasing the new Rogue and Barbarian Expansion (in both Metal and Standard editions), and a number of other amazing goodies.

[You can read more about the preorder specials, which closes March 1, HERE]

So, Dragoon. Just to sum it up, I love this game. It’s not super complex, but it plays well enough. Almost everyone I’ve played it with enjoyed it, and even the couple who weren’t impressed by the gameplay still were awed by the presentation. I’m hoping the lower price point and lighter weight of the Standard Edition will help get make it more accessible to players and retailers outside the US because even without the glint of metal, the vibrant colours and style will still make for a gorgeous game.

You can also check out their newest game Human Era; also available on Backerkit for preorder.