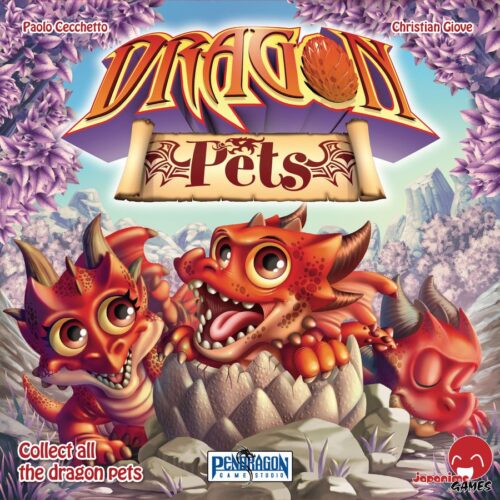 My friend’s reaction, upon picking up Dragon Pets for the first time: “They’re so cute… and… ugly. They’re not really cute, but not really ugly either.”

I can understand that reaction. The dragons of Dragon Pets have big heads and big eyes, and the yellow dragon, specifically, is just kinda derpy. I like derpy though, so I’m in camp cute on this one.

The game itself is fairly simple to learn, and has some really interesting mechanics. The goal is to send out your Dragon Seekers out into the Forest in an attempt to collect mating pairs of dragons. Each pair you collect earns you coins, and the player with the most coins at the, wins.

The Forest is comprised of a 4×4 grid of square dragon cards. Along side this grid are wooden tokens matching the colours of four wooden dice. One token of each colour is placed along the side of the Forest nearest each player, they should be placed randomly, with the only exception being that the same colour token can’t be placed opposite each other.

The first player rolls all five dice, one of each colour plus a very distinctly different white die. the coloured dice are then placed on the matching token on that player’s side of the board, and the white die is just kept to the side until someone chooses to use it. Once the dice are in place, the player may take three optional actions, in order, at a cost of 1 coin per action. They may Catch Dragons, which gives every player their Dragon Seekers back, along with the Dragon cards they were on. If this action creates any mating pairs, players score the higher of the two coin values each dragon. Second, they may Refill The Forest, drawing new cards to fill any empty spots in the grid. Third, they may Reroll The Dice, taking all five of the dice, rolling them, and placing them back on the appropriate tokens. If there are no legal options to place a Dragon Seeker in the next step, the player can preroll once for free.

The last step of the turn in mandatory. The player must send one of their three Dragon Seeker meeple into the forest. To do this, the player counts the number of grid spaces away from any coloured die. That die is then removed from play until someone takes the Reroll action. If they wish, the player may add or subtract the number on the white die, from the coloured die they want to use. (This is the only way to use a coloured die showing 5 or 6.) The white die is then removed from play along with the die it modified. The remaining unused dice are then placed on their matching tokens in front of the next player for their turn.

As soon as the last card is drawn from the deck, to Refill The Forest, the game ends. All players take the dragon cards their Seekers are on at that time (for free), and the scores are tallied. Any player who collected at least one pair of Dragons in all five colours, gets a bonus of five coins, but if a player has any unpaired Dragons, they lose coins matching those card’s values.

My group definitely needed the mental break this game provided. We had just finished a heavier game and went into this game overthinking the rules a bit much. But once the game got flowing it moved along quite quickly and was a blast. There is nothing that would keep younger players from enjoying this just as much as adults, with an added “bonus” of working on simple math skills. (Just don’t tell them they’re learning.) If I was playing with kids more often, I think this would hit the table a lot more than as a light filler game for adults. But it was fun enough that it WILL come out again sometime.