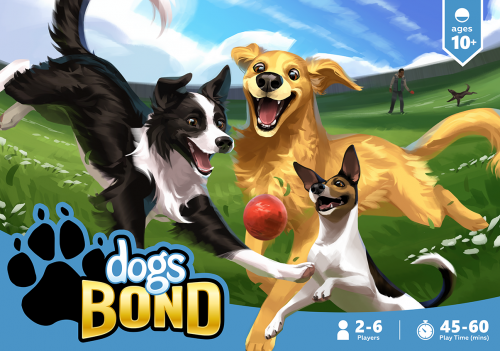 This is an interesting situation. Usually, I am either previewing a Kickstarter campaign, or reviewing a complete game. But thanks to the technology of board game simulators, I was able to play test a game that successfully completed their fundraising, but hasn’t produced a physical game yet, not even in prototype form. Alex Lu, the game designer for Dog’s Bond, contacted me all the way from California, to not only talk about the game, but also to play a full game with me on STEAM’s Tabletop Simulator app. We had a great time playing, and we had an opportunity to talk after about what makes this game unique and personal.

One of the main problems that I’ve seen in animal-themed games, whether they are of the tabletop or video variety, is that it is so easy to fall into the “pokemon trap”. The “gotta catch ’em all” philosophy reduces animals to a commodity that needs to be collected; quantity over quality. Even Cat Lady, which at least requires you to properly care for all your cats, skirts the edges of this.

But what would happen if you flipped the whole Pet / Owner dynamic on its head? What if, instead of being a human looking for a cute pet, you are a shelter animal in search of a loving home? Trying your best to understand what humans want, in order to become the best Man’s Best Friend you can be. Well, then you’d have Dog’s Bond, the game that gives you the “Forever Home” experience in your own living room.

All of the people who were involved in the creation of Dog’s Bond are animal lovers, and it shows. The paw print in the Dog’s Bond logo isn’t a generic stock image, it was traced from the illustrator’s own Boston Terrier, Splash. The Turn Marker is a tiny tug toy, because Tug was the favourite game of Alex’s first pet, Kona. And at the beginning of every turn, all the players bark, because it’s fun, and because it keeps everyone involved and focused, in a world where it’s really easy to get distracted. And best of all, the game company is directly involved with multiple real life animal shelters and rescue organizations, which means that buying this game might actually get animals adopted.

Speaking of names, the dogs here don’t have one! That’s because the first thing you do, after looking through the adorably illustrated cards and picking which of 8 possible breeds you want to be, is to choose your own name. And if you’re anything like me, you’ll start deciding your personality too. Once each player has a dog card, the potential homes are dealt out in the center of the table. Each potential adopter has something specific in mind for their ideal partner, whether it’s Grooming, Health, Obedience or Temperament. In order to get a Forever Home, you need to collect enough points in attributes to have the highest bond level with an adopter. You can attempt to bond with multiple people, but in the end you can only be adopted once. In addition to collecting attribute cards, you can also collect instinct. Instinct can be used for two things. You can either save Instinct points in secret, to get a better chance to be the first player to roll for adoption at the end of the game. Or, you can use an Instinct card to force another player to discard any card. The final type of card in the Event card. Events can raise or lower your attributes, cause you to gain or lose cards, and they can even take a potential adopter out of the game. Most, but not all events, have an effect on both the active player and the other players. Some events require you to roll a die to decide what effect happens. You can also play the special Play Bow card, which can prevent any card from being discarded.

One of the best things about this game is that, even though there is one winner, there are no real losers. At the end of the game, you reveal your instinct points to determine who rolls first against the bond level of their best adoption match, and if you roll under your bond level, you’ve been adopted! But what’s great here is that everyone else gets an opportunity to be adopted too. Just be careful, because there’s only one dog per house. After every dog has (potentially) been adopted, then you add up points to determine the “top dog”. In the end, though, do points really matter? We are reminded that adoption is all about love one last time when you combine your Dog and House cards to reveal a surprise scene of dog and human playing together.

You can find Dogs BOND online at www.dogsbondgame.com or on Facebook at facebook.com/DogsBONDgame.

Dave chatted with Kiki Purrazzella and Alex Lu about the game and you can watch that interview below. (While you watch, don’t forget to subscribe to our YouTube channel.)