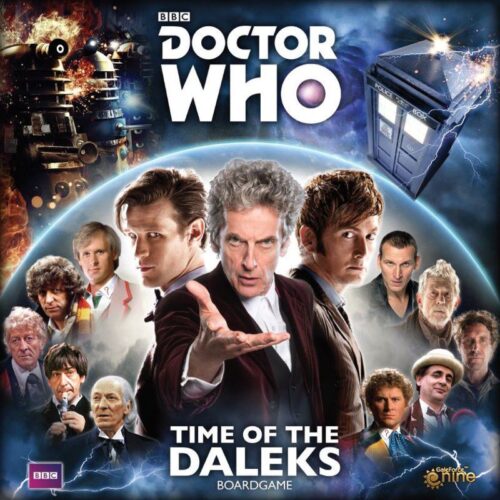 To paraphrase Robert Burns (more than is normal): the best laid plans of rats and men often go awry. I set off into the last third of 2019 with a goal of reviewing as many Doctor Who games as I could before the new season launched on New Year’s Day. Technically I succeeded in reviewing as many as I could, but that still left me with a couple more. For those who follow TheRatHole.ca on Instagram, you might have seen a post bemoaning those game nights that fail spectacularly, along with a photo Time of the Daleks, by Gale Force Nine, all set up and ready to play. It has since taken a frustrating amount of time to get this game back on the table, but I eventually did.

Time of the Daleks is a mostly cooperative game. Technically, the Doctor whose (Who’s?) TARDIS makes it through the Web of Time to arrive at Gallifrey, wins. But, technically, everyone is the Doctor so everyone wins. On the other hand, if the Dalek Ship lands on Gallifrey, everybody loses. Everybody. The Daleks conquer the entire universe and exterminate us all, no pressure.

(random side note, my spell check doesn’t flags “Dalek,” “TARDIS,” or “Gallifrey” as incorrect and that amuses me.)

I get it, the Daleks are THE iconic Doctor Who antagonist. Even a non-Who fan is likely to recognize them. But as far as game themes go, it’s wearing a bit thin. Thankfully, the Dalek theme is ultimately only skin deep. The vast majority of Dilemmas have nothing to do with Dalek storylines, and I appreciate that.

You are the Doctor, travelling all of space and time with your companion(s). But which Doctor? After all, as I write this there have been 15 incarnations of the Time Lord (including John Hurt’s “War Doctor” and Jo Martin’s “Fugitive Doctor”). The short answer is “yes.” Since they are all The Doctor, all the players are also The Doctor. For now, let’s say each player starts as a specific incarnation of The Doctor with one of his companions. The base game comes with the option to play the First, Fourth, Eleventh, and Twelfth Doctor (William Hartnell, Tom Baker, Matt Smith, and Peter Capaldi, respectively), with an additional three 5 & 6 Player Expansion sets featuring two Doctors each.

Along with their chosen Doctor, each player gets a matching TARDIS Console (playmat) and has a single Companion linked to them at the start. They will also have a plastic miniature of their Doctor (to indicate what location they are on) and a TARDIS mini (that moves along the Web of Time track), each with a removable coloured ring to identify them.

The Web of Time is represented by a spiralling track reminiscent of the Twelfth Doctor title sequence. The board with that track also represents the Earth, in the past, present, and future. Earth is the only permanent Location and the only location with three Time Zones (past/present/future).

Each Player’s turn has four phases. First, they Prepare by Uninstalling (discarding) unwanted Equipment cards and Installing (playing) new Equipment. Similarly, they can Dismiss unwanted Companions to make room for a new one recruited in the Adventure phase.

Second, the Doctor may Travel. The player rolls the TARDIS die, if it comes up with a TARDIS icon they can move to a Location already in play, or draw two new ones, selecting one to travel to. If it comes up a question mark, the player draws the top Location and moves there. Each Location has two Time Zones for the Doctor to choose from, each with a partial success condition showing, and a randomly selected Dilemma which will show the rest of the success requirement when revealed.

Once the Doctor arrives at his Location, it’s time to Adventure! The Doctor may recruit a new Companion by drawing from the Companion deck for Earth or Space (as appropriate). Some companions have the option to search and retrieve a specific “linked” Companion instead of drawing randomly. A new Companion is temporary and is dismissed if the player doesn’t succeed at the coming Challenge. When the Dilemma is revealed, it will complete the series of icons that The Doctor must roll on the Story Dice in order to succeed. These icons are shown with the colour of dice that icon is most likely to appear on, but it is the icon, not the die colour, that matters. The Doctor and their Companion(s) each contribute a variety of dice to the pool, from which eight dice may be kept to be rolled for the Challenge. Companions and Equipment (and some Doctors) may allow a player to manipulate the results of a roll, and the player may be able to spend various resources to further manipulate or reroll certain dice. If all the icon requirements are still not met, FAILURE! The Player will receive a penalty, based on the Dilemma, any new companions are dismissed, and a Dalek arrives at the location (which will increase the difficulty of future attempts). If they do match all the icons they succeed and get a reward, based on the location, any new Companions will stick around, and a Dalek (from previous failures) is removed. During the Finish phase, any Locations without a Doctor or Dalek on them are removed from play.

Once all the Players have had a turn, The Daleks get therir turn. The Dalek ship moves forward one spot in the Web of Time, if the Daleks reach Gallifrey, the Players lose. If the Daleks did not win, and any Doctor arrived at Gallifrey (usually as a result of the reward from Challenges) on their turn, it is now that they win. That’s right, even if they arrive at Gallifrey first, and the Daleks arrive second, the Daleks check for victory first and the Doctor second. The other way the Daleks can win is that there can only ever be six Daleks markers in play. The sixth is Davros, the Dalek leader, and if a seventh Dalek would enter play, the game is immediately lost.

There are a few more details to it, but those are the basic rules. For all my bitching about the theme at the start of all this, I really did enjoy the game and so did every one of my players. We definitely missed a few opportunities (and rules) to succeed, but as we realized what we missed we got better.

One of the things that got commented on a lot was the quality of the components. The Dilemma tiles are round, and Web of Time and the Location boards are round with notches in them for the Dilemmas. They are intended for the graphics to fit together perfectly, and I don’t think we found a single one that didn’t exactly line up. The TARDIS and Dalek miniatures look great, and Doctor minis were above average. A couple of people talked about painting them, and I got to point out something extra cool. The Doctor minis are really good, but they are still only plastic, and there is only so much detail that plastic will handle at that scale. Knowing that people would want to paint them, Gale Force Nice wisely released higher quality resin versions of each figure. I haven’t been able to hold and directly compare just how much better those figures are, but they are definitely better even just from a distance.

I’m looking forward to cracking into the expansion for this game, but for what it already is, it’s wicked.