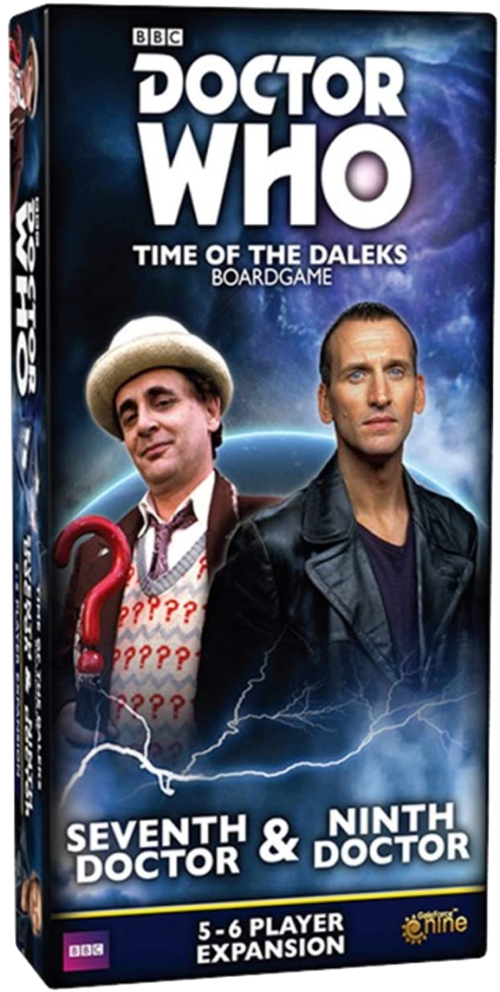 Time of the Daleks surprised me. As I mentioned in my original review of the core game, I really feel that the Dalek theme is overdone, however, the game itself turned out to be a real gem! I also mentioned that there was a 5 & 6 player expansion. I phrased that poorly, because there isn’t ONE expansion, there are several. Each with a new pair of Doctors to play with. The Fifth and Tenth Doctors are together (which is hilarious if you know how they are connected in real-life), The Second and Sixth Doctor are together, the Seventh and Ninth Doctor are together, and I recently had a pre-order ad for a Third and Thirteenth Doctor pack come through my feed.

While every Doctor brings something exciting to the table, today we are only looking at the Seventh and Ninth Doctor pack. These two Doctors really are an interesting pairing. Sylvester McCoy’s Seventh Doctor was the last regular-series Doctor before the series went on “hiatus” and Christopher Eccleston’s Ninth Doctor was the catalyst that reintroduced a new generation to Doctor Who.

One of the things I didn’t really talk about in my original review, was how regeneration works. That was intentional because the process can get more interesting when you add in the expansion packs.

Certain Dilemmas may force a player to regenerate into a new Doctor, just like on the show. When the Doctor regenerates, they stay in the same TARDIS control room, with the same companions, also just like in the show. How that translates into game mechanics is that when a Doctor regenerates, any Companions and Timey-Wimey in play stay where they are. The player that’s regenerating takes the next highest Doctor card and marker, regardless of whether the next Doctor is in play or not. In fact, EVERY player does the same. If you are already the highest-numbered Doctor, you regenerate back to the First Doctor. So by adding in Seven and Nine without adding a fifth or sixth player, there will always be the possibility of new Doctors entering and leaving play. As you add more expansions, you get more options.

The other bonus is that there is exactly zero reasons to keep expansions separated. Even without expansions, there will be cards that make not work as ideally for the Doctor playing it. So this just adds to the variety. Who says the Eleventh Doctor can’t pull out his old Umbrella? How many companions have met multiple Doctors?

Besides adding new Dilemmas, Locations, powerful-but-expected companions, and some unexpected ones (The Face of Boe? Wow.), this expansion corrects my only real complaint regarding the core game. The TARDIS Control Panel playmats were unusually flimsy. The pair of new ones are finally every bit as sturdy as the rest of the components. I know that’s a weird thing to get stuck on, but stuck in my brain it did.

I’m excited to add my favourite Doctor and my favourite Companion into my games. (Who are they? I’m not telling.) I’m even more excited to see what comes next. As I said a the top, it appears that Three and Thirteen are coming soon. That leaves the oft-shafted Eighth Doctor, the “War Doctor”, and potentially the “Fugitive Doctor” still to come. If I had my druthers, I’d see John Hurt and Jo Martin come next. Leaving Paul McGann to pair off with the inevitable Fourteenth Doctor. But no matter what, I can hardly wait to see more of this great game.