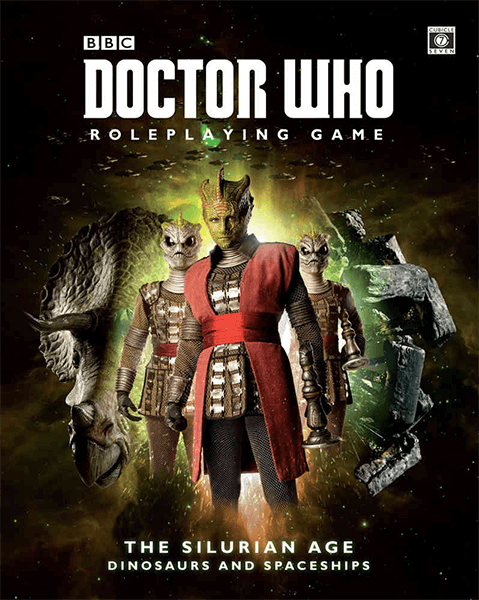 Doctor Who and Aliens are like Peanut Butter and Jam. The Doctor is Peanut Butter. There are different peanut butters, and people always have a preference. Aliens are the Jam. There are a bunch of very different jams, strawberry jam and raspberry jam are nowhere close to the same, and saskatoon berry jam is something uniquely special, but they are all still jam. Well, if aliens are jam, dinosaurs are marmalade. There are different kinds of marmalade, but they are more alike than different and they are all closer to jam than they are any other terrestrial breakfast spreads (that would be us humans).

Obtuse metaphors and allusions aside, the full title of the sourcebook we are looking at is The Silurian Age – Dinosaurs and Spaceships. Only in Doctor Who would dinosaurs and spaceships be perfectly reasonable as a single volume, and naturally it’s the Silurians who bridge those topics.

The book is split into three main sections, starting with Prehistory. This section obviously focuses on Dinosaurs and the likes. The Doctor has visited virtually every point in history and prehistory, so as the book talks about each geological era, it references the specific stories (and sourcebooks) that happened in that era. “in” an era being relative since we are talking millions of years here. For each era, you learn about some of the TARDIS sensor readings and other signs that might indicate you are in a given era. There’s a list of alien encounters that happened, or could happen, around that time. There is also a ton of good information like pointing out that the Silurian race isn’t actually from the Silurian era, and how to tell if you are in the Devonian Era or just somewhere in Devon.

The Doctor has, on occasion, had companions from lower technological times in the past, so there is a good blurb comparing the pros and cons of playing such a character, before moving on to looking at dinosaurs and how to use them in your game. Since games aren’t restricted to reality (shocking, I know) there are several pages of Player Traits and Gadgets, plus new Dinosaur Traits allowing your Big Bad to monkey with their lizards, and that are used in the following 20-something page bestiary of prehistoric creatures. Most of those entries are completely legitimate, although some are exaggerated or otherwise fictionalized, and some are listed with more sensational names versus strictly scientific ones. A few examples of that are Phorusrhacids being labelled as Terror Birds or specifically using Dracorex Hogwartsia rather than the more generic Pachycephalosaurus.

[After someone read the line “monkey with their lizards” I was accused of only wanting to have King Kong fight Godzilla. At first I said that would be a different game, but does it really have to be…? -dc]

As I mentioned at the start, The Silurians are the bridge between prehistoric-earth and far-future-space. But they weren’t always intended as that. When they first appeared opposite Jon Pertwee’s Third Doctor, they were very much a terrestrial threat. Through many books and a handful of Classic Who episodes, that’s how they remained, earthbound. While some Silurians created the large hibernation bases deep under the Earth’s surface, the new series, with its new special effects, revealed that other factions of Silurians had built giant spacefaring arks and left earth rather than face the prospect of extinction not unlike the dinosaurs that they had learned to tame.

The middle chapter covers all of those things and more. The Sea Devils storyline established that there were several very different species of Silurians. So when they returned looking very different than their classic-series iterations it wasn’t much of a stretch. Scattered throughout the chapter are stats for the original Three-Eyed Silurians and Seas Devils, as well as the modern Silurian Warrior and a host of other generic Silurian NC (Narrator Character) occupations. Jus like the rest of us, Silurians need a place to exist; so there is detailed information about the Silurian cities and bases on earth, including a sample city, and about the Silurian Arks that could be encountered by players in space. The chapter closes with several notable Silurians and all the details for building and playing a Silurian Player Character.

Spaceships. In broad terms, spaceships follow many of the same rules as other vehicles, but they also have story points and traits like a gadget or a character. Plus they have Attributes that function very much like a character, just on a different scale. One of the things I appreciate about the Vortex System that powers the Doctor Who Roleplaying Game is how is it handles things like scale. For example, everything moves by Area not a set distance. A chase on foot might be a 30 metre area. A motorcycle, 300 metres. In space, it’s probably closer to a 3000 kilometre area. A person moving from area to area is relative to a Sontaran Battle Cruiser doing the same. So in that way spaceships are easy to handle. But one character can’t possibly run a large ship, it takes a crew. When there’s any sort of major action or conflict, the crew act in the same action round order as they would as individuals in any other conflict scene: communications would happen in the Talkers phase, pilots would maneuver in the Movers phase, scanning or repairs would be the Doers phase, firing the ships weapons would happen last in the Fighters phase.

As usual, the book concludes with a full adventure, Asteroid Day. As usual, I’m not going to spoil it by talking about it.

When I write these reviews on roleplaying games, I’ve usually got some or all of the other books I’ve reviewed from that game sitting around. Some days I look like a wizard surrounded by magical tomes. I like to cross-reference things and compare for consistency. I’ve looked at the stats for the different Doctors and their TARDIS. Madam Vastra has different stats in the core book than this book. Okay, well she’s set up as a Player Character there and an NC here. How do the different Silurians stack up against each other? Decent, consistent stats within expected variances for differing professions. That’s when I noticed it. The formating between stat blocks is different.

I would understand some differences between the older sourcebooks and the current ones. I could even let it slide if there were just differences in wording between the current Core book and current sourcebooks. But there are a bunch of inconsistencies between areas within this one book. Generally speaking, the stat blocks are more compact, and therefore less clear, than in previous books. But it’s not even just that either. The details aren’t even consistent between entries. Same information, but one entry may have a colon where another has a dash. Or the exact same ability will be labelled as a slightly different thing between two different entries.

Despite the consistency issues in the stat blocks, the writing and overall detail in the Doctor Who Roleplaying game continues to make it one of my favourites. It’s always a joy to open the cover of another sourcebook.