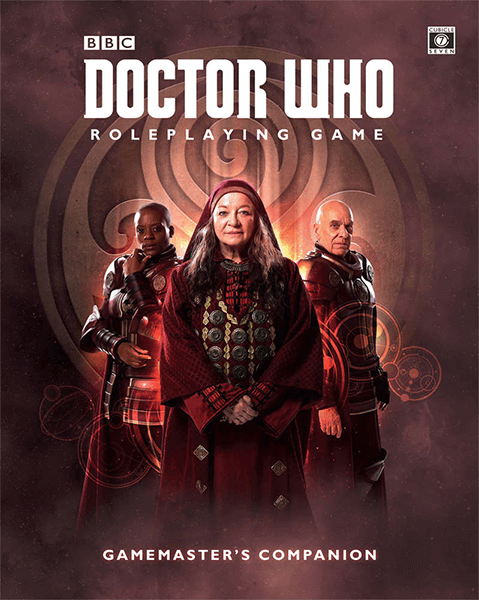 I am a terrible Gamemaster. I come up with entertaining ways to tell stories here in The Rat Hole, and elsewhere, on a near-daily basis. I’ve been an announcer/commentator in front of a arena-sized crowd and in front of a camera online. I’ve been an entertainer most of my life. My creative drive is unstoppable. I can sell ice to an Inuit. But I’m a terrible Gamemaster. For all the facilities I have that SHOULD make me a good GM, I lack the most important one, passion for it. But as much as I prefer to be a player, it’s not uncommon for me to end up on the “wrong” side of an adventure. Inevitably someone says it. “So you’re the Gamemaster now?”

The Doctor Who Roleplaying Game really is a game I should be more attentive to as far as running it goes, and the Gamemaster’s Companion does a great job walking a person through what is arguably the hardest job at any gaming table.

More so than many games, The Doctor Who Roleplaying Game really is a collaborative effort between the GM and Players. Some games honestly don’t require that connection until the dice hit the table. Whether you are playing a horror-themed campaign or one-off adventure full of fuzzy protagonists, Starfinder is going to feel like Starfinder. When you sit down at the table you have a solid idea what your experience will be. With a few allowances for uncomfortable content, those games don’t need as much buy-in. The GM preps it and the players play it.

But Doctor Who has never been like that. A First Doctor adventure feels nothing like a Tenth Doctor adventure, which feels even less like an all-UNIT adventure. If you’ve ever been involved in “the fandom” of Doctor Who, you already know that not every Whovian enjoys every Doctor’s story. That alone makes some coordination important. The main things are the overall concept and WHO the players want to play with. There are even a bunch of fast concepts and characters might fit well within a variety of different frameworks.

The second chapter breaks down an adventure and the Gamemaster’s roles in it. Then it breaks down the story structure. They break it down in such a way that if you wanted to try your hand at writing a film or television script, you could use this chapter and if you’re at a loss for ideas they have a massive “Random Theme Generator,” a “Totally Random Adversary” table, and even more tables for objectives and locations. You could throw a mitt full of dice and have the start of a plan.

The next chapter focuses on villains. But not the villains you might expect. Yes, the “Totally Random Adversary” table gives you existing antagonists, and every Doctor Sourcebook does the same in the context of that specific Doctor. But it’s not unlikely that those options aren’t going to work for you. This specific table is one of the few problems I have with the book. Based on a series of D6 rolls, it breaks down by the first twelve Doctors and I don’t expect anything short of maybe a promotional thing for 13 until Jody Whittaker leaves. (Free RPG Day is a thing. Cubicle 7, you usually are a part of it, just saying.) The problem is that the final Adversaries on the table don’t have references pointing to their stats, they aren’t always in that particular Doctor’s sourcebook, and when they are they aren’t always easily found in it. Seriously, I would give my last regeneration for a secondary index page in the sourcebooks that specifically reference the NPCs and adversaries included and where exactly to find them. It’s all fine and good to know The Master is probably somewhere in 8 and Missy in 12 and look them up in the main index. But they aren’t in the same section in those books, and without hunting for specifics there is no way to really know who and what else might be there otherwise.

Rant over, back to the topic at hand.

When you are creating and running your own adventures, which is the point of this book after all, you likely will want some sort of new villain. Be it “the Big Bad” or some random minion, this chapter tells you how to build them all. I love that it goes much deeper than just the mechanical build, but talks a great deal about playing the villain. What happened to make your villain a villain? Similarly, the following chapter tackles coming up with a setting(s) for your adventure.

Arguably the most important section is all about running your games. Tips, tricks, and tables galore are there to make running a game easier for everyone. Okay, there surprisingly aren’t actually many tables in this chapter, but alliteration. What there is, however, is a giant section of “stock footage.” Generic people, places, and planets (that alliteration is legitimately in the book) that can be grabbed on the fly or used when you write things up ahead of time.

The book closes out with not one, but three adventures. Death in Toytown, The Grip of the Kraken, and The Bellagio Imbroglio. Looking at those adventures could easily be a review unto itself, so I won’t say anything beyond their inclusion.

I’ve been playing RPGs for as long as I can remember, and more systems than I can count, even before I started reviewing them. The thing that I absolutely LOVE about the Doctor Who Roleplaying Game is the detailed methodology in most of the materials. I’ve mentioned before that the Doctor sourcebooks could almost be considered autobiographies. Many sections in this book could be presented in a film studies course. The approach that this book takes will likely benefit any new Gamemaster, no matter what game they might want to run. I never thought I would say a GM focused book would be a must-have, but the Gamemaster’s Companion is a must-have.