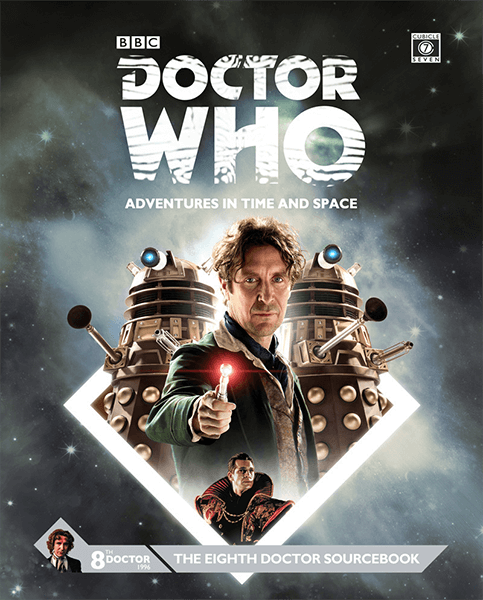 Not that long ago I got sit down with the 7th Doctor, Sylvester McCoy, on The Legend of the Traveling TARDIS show. I was already working on a review of that Sourcebook but had to schedule it for what ended up being a week we were down for maintenance. THEN the unexpected happened, I got to sit down with Paul McGann, the 8th Doctor. That’s when I realized I had somehow skipped over reviewing the 8th Doctor Sourcebook for the Doctor Who Roleplaying Game. Since I mentioned in my 7th Doctor review that I’m planning to work backwards through the classic Doctor books, I guess I should smash this out and bump poor Sylvester back a few more weeks.

Everything about Paul McGann’s run as The Doctor is unique, and his sourcebook for the game is no exception. I’ll (obviously) get to that, but first I need to vent about something. Paul McGann is widely considered to have had the shortest run as a Doctor, only seeing screen time in a single TV movie and the short Night of the Doctor web release that introduces John Hurt’s War Doctor. In that short, McGann references a bunch of past companions whose adventures the public has never seen. But here’s the thing, they’ve HEARD those adventures. Companions like Charley came from the 8th Doctor’s adventures with Big Finish Audio. Big Finish Audio is officially canon. That means Paul McGann actually had, and continues to have, the longest tenure as the Doctor. But sadly, Cubicle 7 doesn’t have the licence to BFA stories, so those companions only get a cursory note that “the exact nature and statistics of these companions are left up to the Gamemaster.” So for the Gamemaster wanting to include those characters, now you know where to find them and others. I’ll just end this rant by wishing for Cubicle 7 to put out a special sourcebook surrounding BFA’s surprisingly extensive series of Time War stories. Ok, end rant. Probably.

Because of his “short” run, the companions included in this book include the would-be-companion, Cass, from Night of the Doctor; his “primary” companion from the tv movie, Dr. Grace Holloway; and Chang Lee, who I consider more of the Master’s companion, and who I named the scariest Doctor Who villain for his very human gullibility in just joining The Master. (Although his entry here chalks that up to The Master’s mind control.)

Also because of his “short” run, the chapter walking through how to play his existing adventures only has his first and last appearances and just sort of talks around what might have happened during the time between. The upside to this (just because I’m bitter, doesn’t mean there aren’t positive things as well) is that this sourcebook has a number of elements that the others don’t really have space and time for (I’m not sorry for that joke). One of the most important things is that it discussed is Event Style Play, more commonly called a “one-shot”. In theory, the Doctor Who RPG runs like a television series. An interconnected, bordering on serialized, series of adventures: a campaign. A large part of this section provides advice on taking all of that television-series-goodness and distilling it down into a single movie-blockbuster-style event: a one-shot.

The other thing this has is a full-length campaign in the 8th Doctor era, Doom of the Daleks. When I say “full length” I mean it. The adventure has 12 parts, plus a prologue. By comparison, the upcoming Series 13 of the show is only slatted for 10 episodes. I like to keep my adventure reviews as SPOILER FREE as possible, So I’m going to be very general, here. There is also at least one book of adventures released after this was published, so I will hold off on discussing the formating for that more current version to cross my desk.

The Prologue centres, in part, around the NPC character of the Director. A Time Lord agent modelled after the stereotype of a non-descript government Special Agent. The Director is there to bring together all the characters, no matter WHO they may be. Is someone playing one of the Doctors or another Time Lord? UNIT? Torchwood? The Paternoster Gang? Joe the Plumber, who had no idea any of this was more than a bad TV show? They are all discussed here.

From there the players work their way through 12 adventures, each one taking place at a different point in the Doctor’s timeline. They are mostly inspired by events in the television series, but they don’t simply rehash those adventures which is nice. The only disappointing part of the whole thing is an extension of a disappointment from the playable summary of the 8th Doctor film. There is one particular character that could have been another toss away backgrounder, but that received a surprising amount of on-screen backstory. The young security guard that Grace and the Doctor encounter, Gareth,The young security guard that Grace and the Doctor encounter, Gareth, whose future accomplishments would save civilization many times over. But not until he can first pass his Poetry mid-term exam. He very clearly set up for a return had the film succeeded in rebooting the show. The adventure in the 8th Doctor era missed a major opportunity to bring him back but didn’t. (If someone ever writes that adventure, I’d love to play it. Seriously, message me.)

It’s easy to say “Oh, I don’t know that Doctor, I don’t need that book.” It’s not even an invalid thing to say when funds are tight and choices need to be made. BUT just the Doom of the Daleks campaign is enough to warrant picking this sourcebook up. I may have sounded overly critical with what I’ve been saying here, but it’s only because of things that many players may have never even noticed. I’m very partial to Paul McGann’s Doctor, and the deeper I dive into his non-televised adventures, the more of them I want. What IS here, is pretty darned amazing.

Oh, since I didn’t fit it in anywhere else, I do want to toss out kudos for an ultimately small design element. The spine of every Doctor sourcebook features an image of that Doctor. (The original Adventures in Time and Space branded printings of the first 11 Doctors also creates a giant logo image when you put them all on a bookshelf together.) They also have a small image with the years of their original run on the front cover. These are both images of McGann circa 1996. The main cover image, and the inside border images feature the much older Night of the Doctor McGann. The less-90’s looking Doctor that would likely return if the showrunners ever wanted to do that.