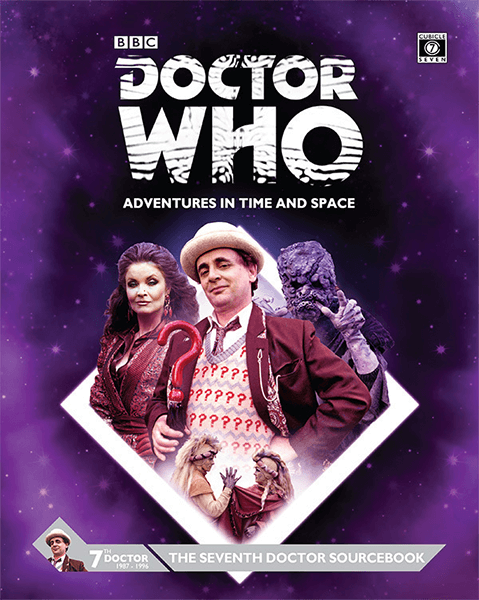 Like many Whovians I have more than one favourite Doctor. New Who and Classic Who. For Classic Who, my favourite is Sylvester McCoy’s Seventh Doctor. I’ve had the pleasure of interviewing both him and his companion Sophie Aldred (Ace) on The Legend of the Traveling TARDIS Show. Their time in the big blue box was sadly cut short, but it laid out a blueprint for the eventual return of Doctor Who.

McCoy is a brilliant comedic actor. He showed that off early in his run, but as the series continued he grew to be one of, if not the most, machiavellian Doctors. His penchant for setting events in motion to culminate well into the future creates a perfect dream for the Game Master who like to play the long game. His character works well as a sort of puppet master and the players may well be the puppets. If using the Doctor as an NPC feels too blunt an instrument, one suggestion is to have that player (if any player wants his role) be given a certain amount of inside information. Maybe he buries a strange device in one adventure, which becomes important when he recovers it in the next adventure.

The book is laid out similarly, but not identically to the Twelfth Doctor Sourcebook that I reviewed a few months ago. The same information is there, but it’s laid out a bit differently. Twelve was the first sourcebook on a Doctor I’ve reviewed and also the first one to be released since rebranding the game from Adventures in Time and Space (which this book is still branded as, for the record). So there could be any number of reasons for it, and it doesn’t really matter.

After a brief introduction, the first chapter provides the background and character sheets for The Doctor, his Companions, and his TARDIS. Melanie Bush was Colin Baker’s companion when he regenerated and eventually left the TARDIS. Ace was his most well known companion, one of the most popular companions ever, and one of the most important companions in the history of the show. Then there’s Sabalom Glitz. Calling him a companion of the Seventh Doctor is a stretch. He was part of one storyline and that’s all. He did have encounters with Sixth Doctor, but I have a big hole in my Who-knowledge there. If nothing else, he’s a unique character for a player to run, and could be the center of a very entertaining campaign after leaving Ice World with Mel.

The next two chapters talk about designing new era-appropriate characters, new Gadgets and Artefacts that might appear in a Seventh Doctor adventure, as well as both new and returning enemies.

Having never watched the previous Doctor, I never realized just how much carried through to the Seventh Doctor. Mel (obviously), Glitz (sure), The Rani (I forgot about her), and of course Anthony Ainley’s version of The Master was the longest run in the Classic era (outsurviving four Doctors.) I had already made the choice to work my way backwards through the Doctor sourcebooks as much as possible, but I’m now even more excited to eventually dig into the Sixth Doctor era of both The Roleplaying Game and the show.

Tangent over, let’s get back to THIS Doctor’s book, shall we?

The fourth chapter is short, but talks about creating your adventures that are consistent with the themes and feel of the show, before covering how to work with those same established stories. Those stories eventually come to an end, but not with a regeneration. Doctor Who went “on hiatus” at the end of 1989 and wouldn’t return to television until Paul McGann’s television movie in 1996. The Seventh Doctor and Ace would continue their adventures in mediums not covered by this game, but that doesn’t mean players can’t use them to inspire their games until time catches up to them.

I see myself saying this a lot as I tackle future (past?) Doctor sourcebooks, but this book inspires me to watch/read/listen to more of the Seventh Doctor’s adventures. That’s honestly not a big challenge, as I’ve already admitted my fondness for him. But I’m also excited by the prospect of learning more about Colin Baker’s much-maligned time in the TARDIS. I don’t think there is any Doctor who has the open-ended potential for new adventures as the Seventh Doctor, and this is the book to help make them happen for your group.