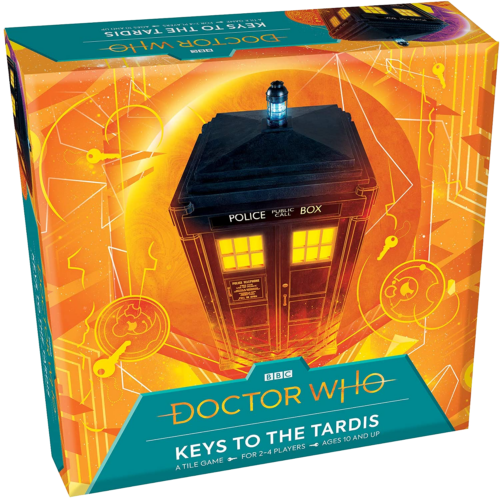 There may not be new Who coming to television anytime soon, but that doesn’t mean some can’t come to your table. It was just good luck that I came across Keys to the TARDIS, and even better luck that it comes from Outset Media, a Canadian company, so I was able to get it from them without the ridiculous delays that US packages are encountering these days.

It seems an odd place to start for me, but the first thing I have to mention is the cover art. Most Doctor Who games come in “spacy” colours ranging from black to blue to occasionally purple. The odd cover that doesn’t, like some of the Doctor Who Roleplaying Game covers, still tend to favour muted colours layered over a dark sky. Not Keys to the TARDIS. BRIGHT yellow and orange background with an equally bright teal title bar, that makes the mostly silhouetted TARDIS pop like you wouldn’t believe. (Actually, you should be able to believe it; since the cover will be at the top of this review.) It is, without a doubt, one of the most eye-catching boxes on my shelf, Doctor WHo or otherwise.

Since we are already there, let’s talk about the rest of the components. There are six punchboard standees representing the six modern Doctors, including the War Doctor. (Depending on Series 13, maybe they can release Jo Martin’s Fugitive Doctor as a promo thing someday.) The game takes up a deceptively large space, with a loosely placed 7×7 grid of tiles, with each square tile being 2.5 inches. Thankfully there is no individual player area required, just enough extra space for each Doctor to start off of the board, and a space for the draw and discard piles. The cards are cards. The back matches the box art, the front has a uniform style, the colour-specific Key cards are great, each featuring a different companion or notable ally of the Doctor. The Sonic Screwdriver cards each feature one of the six Doctor’s screwdriver (thank god, no sonic sunglasses), but I wasn’t a huge fan of the non-Key card design otherwise. I’ll come back to that after I talk about what the cards actually do – which I think I’ll do next.

Keys to the TARDIS is a reskin of 1015 Creative and Outset Media’s previous release, Keys to the Castle, with the goal and rules largely being the same. The goal is to move your Doctor across a randomly created grid of tiles, with a special “TARDIS Control Tile” in the centre. The first player to reach a tile on the opposite side of the board from where they started, wins. Each tile is either yellow, green, blue, or red, with a closed doorway on one side and an open door on the reverse. On their turn, a player draws a card, plays a card, and may move onto an adjacent open door tile. To open a closed door, you need to play a Key card of the matching colour. You can re-close an open door tile in the same way, and you can affect any unoccupied tile anywhere on the board. Several of the tiles have additional effects when you move onto them. There are Extra Turn tiles (that obviously give you an extra turn) and TARDIS Key tiles (that allow you to open/close a door of any colour but do not give you an extra move action). Some tiles have Daleks on them, which block players from moving onto those tiles without first playing “Jam Cookie” (a reference to the 11th Doctor bluffing the Daleks into believing a Jammy Dodger was a TARDIS destruct button.) New in this version of Keys is the TARDIS Control tile (which is why the grid has been expanded from the 6×6 grid in the original), you can’t move on to the Control tile using normal movement. To get in a player needs to enter a Teleport tile from which they are instantly moved to the control tile. This new mechanic can quickly jump a player into the lead (thus making them a major target), but it can also be a hindrance, depending on the situation.

There are six types of non-Key cards in the game, the aforementioned Jam Cookie card being one of them. The Sonic Screwdriver card acts like a Key for any colour door, but also can remove Time Barriers. Time Barrier cards can be played on any unoccupied door tile preventing it from being opened, closed, or moved onto. The Cyberman Assault card lets a player move an opponent’s Doctor any space that they could legally move onto on their own. Ordinarily, that would mean moving them orthogonally, but the Time Tunnel card can be played to permanently create a diagonal movement point between two tiles. Finally, the Pandorica card is placed under a Doctor, and that Doctor is unable to move for two turns. The affected player still takes their turn as normal otherwise.

I mentioned I wasn’t a fan of the design of those non-Key cards. They have a tacky striped logo in the corners and an un-thematical watercolour-ish background. I would have much preferred they carry through the yellow/orange and teal motif from the other areas of the game. Admittedly that is 100% my personal artistic preferences talking, I’m certain there are also people who think the opposite, and wish the wannabe-watercolour pattern was more predominant.

A less subjective issue was the rulebook. This isn’t a difficult game, so we were surprised whenever we tripped across a question that wasn’t clearly answered. For example, each Doctor starts off the board, and may enter through whichever door tile they can open. The rules state that if you get stuck you can exit the TARDIS by moving back off the board on your starting edge and re-enter on a later turn through a different door tile. We couldn’t find an answer to clarify if that meant the player could simply remove their Doctor back off the board, or if they needed to move one tile at a time (we decided the first option made the most sense). There is also a point in the rules where it says you can play a card “either into a discard pile or on a tile” which makes it sound like discarding a card is also considered playing it. We were pretty certain we were overthinking that one, since when you play most cards they get put into the discard pile.

The other big question that came up was the order of operations between the timing of Teleport tiles and the win condition. “The first player to move their pawn to any open door tile on the edge opposite their starting side wins” BUT “Any player who moves to a Teleport tile is instantly teleported to the TARDIS Control tile” Which happens first, the win or the teleport? We decided that since the Teleport rule specifically says instantly, that it should take precedence over the win condition which does not otherwise specify a timing.

Nitpicking aside, this was a surprisingly great game. It didn’t take long for the take-that elements to start getting outright vicious-with-a-smile. It doesn’t necessarily “feel” like a Doctor Who game, but it doesn’t need to. The gameplay holds up on its own, regardless of theme. What that means is that you can play this game just as easily with non-fans as with die-hard Whovians. This is probably one of my top two favourite Doctor Who games, in part for that very reason.