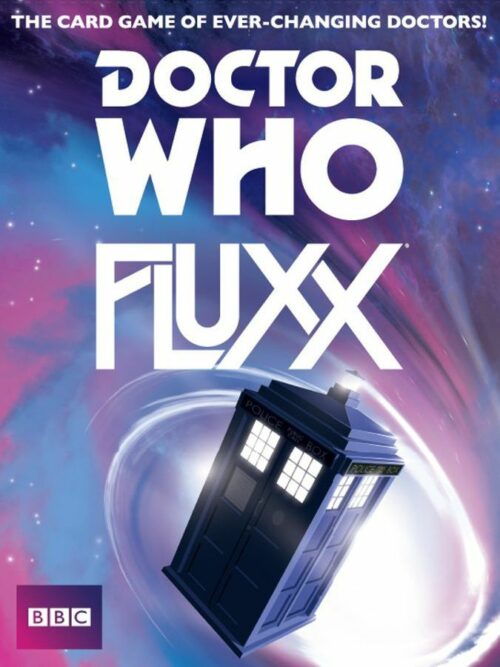 Over the past two years, I’ve reviewed five different Fluxx games. Sufficed to say, I enjoy the consistent inconsistency of Fluxx. I’ve also reviewed a bunch of Doctor Who games lately, with more reviews to come. So, sufficed to say I’m a bit of a Whovian. Basically, it was just a matter of time before this review happened.

If you haven’t read my other Fluxx reviews, here’s a very short overview of how to play Fluxx. The game starts with two Basic Rules: Draw 1 – Play 1. That’s everything. As the game progresses new rules are played that change things like the Draw – Play rules, and there is no win condition until someone plays a New Goal card. Generally to win a player needs to have specific Keeper cards in play, and no Creeper cards in play (unless specified by the Goal). The Goal cards could change at any moment, throwing certain victory into constant… Fluxx.

Trying to distill down over 50 years of Doctor Who into a mere 100 cards is a near-impossible task. What that ultimately means, is that there isn’t room for many surprises here. The Keepers include the first 12 Doctors, a handful of companions, and a few obvious extras like the TARDIS and Sonic Screwdriver. All but one of the Companions are from the modern era of Doctor Who, which makes a certain amount of sense.

There are a few references to classic Who, the Creeper “The Master” is styled after Roger Delgado, the first, and arguably most recognizable, actor to play the character until his untimely death. The Creeper “Cybermen”, has art featuring multiple eras of that race’s designs. But the most notable nod to the classics comes from Tom Baker’s 4th Doctor.

There is a whole generation of North American Whovians that first encountered the show during it’s run on PBS, mostly featuring the 4th Doctor. I’m one of them. It wasn’t until I started listening to (and now occasionally appearing on) The Legend of the Traveling Tardis radio show that I realized that my experience wasn’t unique, or even uncommon. So even as it makes sense that Doctor Who Fluxx would target the New Who audience, it makes just as much sense that the exception would be Baker. The only classic companion is K-9, and the only non-specific extra Keeper is “That Scarf” (a reference that likely needs no explanation to even non-Whovians). The last reference is the Goal “Would You Like a Jelly Baby”, that requires “The 4th Doctor” and “That Scarf” to win.

If I had to find something I disliked, that something would be the coloured art of the 1st and 2nd Doctor cards. Call me a purist, but I’ve always felt that anything from the era of these two doctors should be rendered in the same black and white that they were broadcast in. Other than that, I love how this game came together.

Without going back and pulling out my other Fluxx sets, I can’t verify this, but Doctor Who Fluxx seems to have more subtle effects built into the Keepers and Creepers than usual, and I think that adds another great layer to this already great game. Even as much as I love Fluxx, this stands as one of my favourites.

Looney Labs doesn’t often come out with expansions for Fluxx. The game is exceptionally well balanced, so adding cards can be a challenge. On the other end of things, Doctor Who is a property that is hard to work with, and a standalone tabletop game, because it goes through such a drastic change with each new Doctor. That creates a challenge for producers, in that they have to decide whether they can stay current with an early-ish new Doctor release, or wait until that Doctor’s run is closer to complete, OR do nothing and let the game stand as it is.

With the 13th Doctor, Fluxx is uniquely positioned to take the first option, as they can only add so many cards into the game and don’t really need to cover everything.

The expansion only has 13 cards and The Star Trek Fluxx Bridge Expansion had 12, so it could be schtick or could just be what happened. It, somewhat obviously, includes the Keeper “The 13th Doctor” along with her three main companions. She also brings the Keeper “New Sonic Screwdriver”, which has the same ability as the original “Sonic Screwdriver” Keeper card, and counts as the original where applicable. It also opens the door for the Goal “I Found the Old One” that requires both Sonic Screwdriver Keepers to win. Other than that most of the new Goal cards are self-referential within the expansion. But there is one throwback Goal that I’m glad to see, “Twice Upon a Time” requires the 1st and 12th Doctors in play, referencing the amazing episode of the same name that made David Bradley’s portrayal of William Hartnell and his 1st Doctor into canon.

The one omission I’m sad to see not included in either set is Missy, the current incarnation of The Master. I can see the argument for excluding her from the expansion, as she has yet to appear, but it’s nevertheless a disappointment. Perhaps there will be a promo card of her coming. Speaking of promo cards…

If you’ve read this far, I’m going to assume you are a Whovian. As a fan of Doctor Who, you know that part of the 50th-anniversary celebrations included filling in some of the time between Paul McGann’s 8th Doctor and Christopher Eccelston’s 9th Doctor. We never got to see that regeneration, because, as we learn, there was a regeneration between the two. John Hurt played an incarnation of the character that was a “Warrior” not a “Doctor”. That character is now called The War Doctor, and is often labelled as X and numbered as 8.5 in the line of Doctors.

For game purposes, he counts as Doctor 8.5, on cards like the New Rule “The Blinovitch Limitation Effect” or the Goal “Regeneration”. Unlike most of the Keepers he also has an ability. Instead of playing him as a Keeper, he can be discarded from the player’s hand to cause all Keeper and Creeper cards on the table to be discarded from play (very appropriate).

Because of the wibbly-wobbly nature of Doctor Who, The War Doctor is definitely one of the most complex promo cards I’ve come across in Fluxx.