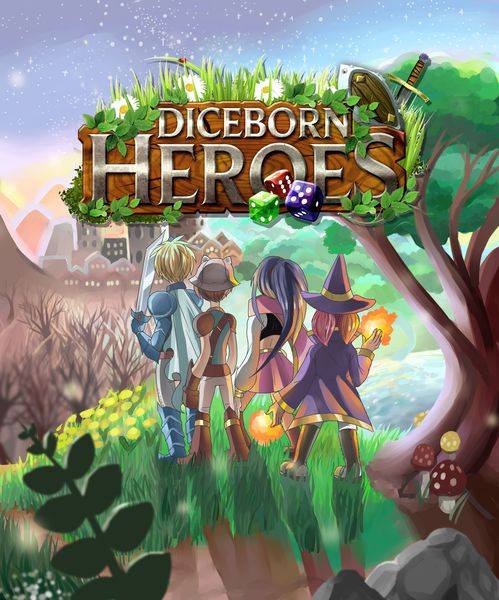 So, I don’t love reviewing prototypes. I’m completely talking review here, not playtesting. If given the opportunity to play a prototype of something I may be doing a CrowdFUNding Spotlight on, of course I will. It gives me great insight, but that’s coming at it from a different place. Recently I’ve been asked to specifically do some Kickstarter previews, again a different beast. But when I do my regular reviews I like to have the final product so that I’m working with the same thing that you, my readers, will be working with (give or take an exclusive/deluxe vs regular version). Well, somehow I ended up with one of the demo/prototype boxes of Diceborn Heroes instead of the finalized copy. It’s not a big deal, but it does mean I can’t really comment with 100% certainty on things like the final artwork, or the quality of the final components. But let me tell you, the custom dice tower that was in the box is pretty swanky.

What I can comment on is what a great game Diceborn Heroes is to play. I’ve had the opportunity to demo it at several points over the course of its development, and have always been struck by how genuine it is. It feels surprisingly like the turn-based Japanese roleplaying games (think Final Fantasy) that inspired it. Having tried the game before, I have been guided through the rules rather than learning them for myself. So I let one of my players have the rulebook this time, and she was one of my least rules-reading friends. By the end of our first game, playing with the tutorial/family rules, she felt that she had learned the rules well, without much guidance from me.

The only difference in the tutorial/family rules is that it removes the Quest Phase from the game, streamlining it for simpler learning, but I’ll walk you through the full game here.

Each player chooses a Level 1 character class (Fighter, Mage, Theif, and Preist), with each player being able to choose the same character class as another player if they like. Once everyone has a character, they grab the coloured six-sided dice that their character gets. At the first level, every character gets the same two green dice, but with the addition of red, blue, or more green, dice as the character levels up later in the game.

The first phase of play is the Quest Phase. Each round the players will be given a quest. During the Combat Phase (that I’ll talk about in a moment) any player may use one of their dice to fulfill the quest, locking that chosen die on the quest until the end of combat, meaning players temporarily lose the use of it. Quests may also have other impacts on how the game progresses and usually get harder with each round.

In the Combat Phase, one Monster card is revealed for each player, and a card from the Attack deck is dealt facedown above each of them. Players then roll all their dice and assign a single die to one of the actions on their character card, and/or lock a die onto the quest card. From there the Attack cards above each monster are revealed and combat begins. The order of attack is resolved lowest to highest, with heroes using the number of the die they assigned and monsters using the number on their Attack card to determine that order. On a hero’s turn they will take the action they assigned their die to (usually a type of attack). On a monster’s turn, they attack in whatever way their card says. The second function of the Attack Cards is to determine who the monster targets. They will never attack a hero who’s assigned die is lower than their attack card; if a player’s die is equal to their card they will be targeted if no player is equal they target the next closest number. Ties are always decided by the players as a group.

If there are still monsters (or heroes) left alive after all attacks are resolved, players reroll any unlocked dice and remaining monsters get a new facedown Attack Card, and you do it all again. When a monster is killed, the killing player takes the monster card as “spoils” and a listed number of Attack Cards are returned to the bottom of the attack deck. This is important. Why is it important, you ask? Because the Attack Deck also acts as a countdown timer. If there are zero cards in the attack deck at the end of a combat round, the heroes lose. It’s highly unlikely this will come up in the first, or even second, round of play but may easily become a concern in the third round and almost definitely will come up in the Boss fight.

Once all the monsters are defeated, the players return to town for the Town Phase. As you might expect, while the characters are in town they can buy items, using the monster spoils then earned in combat. Players are totally allowed to share the cost of an item between them, although only one of them may own and use that item. Characters can also rest at the inn, to heal any wounds they received in earlier combat, at the cost of putting one card from the attack deck into the discard pile to fully heal. The final thing characters will do in town is level up.

When a player levels their character up, they are faced with two options. First, they must choose if they would like to change character classes. Each starting class gives two additional class options that a player may choose from. If they choose to change classes, they will flip over their previous class card and choose one of the two abilities listed there for their new character to use, in addition to the abilities on their card. If the player chooses to remain their original character class, they will similarly flip over both of the new class cards, and choose one of the abilities listed on either of them to use in addition to their original selection.

After the second round of questing and combat, the players return again to town, and can again upgrade to a higher level class or select a new higher level ability for their current class.

After the third round, the characters never make it back to town. They defeat the monsters, finish the quest, and are immediately faced with a terrifying Boss Battle. Each big bad boss is different, and while some of them are harder than others, none of them can be called “easy”.

Despite some delays in Kickstarter fulfillment, Diceborn Heroes is worth the wait. The combination of using assigned dice for heroes and the attack deck for monsters to determine turn order is something unusual and a lot of fun. By creating this sort of AI system, it means that solo play operates almost identically to group play. If anything the solo play actually enhances the JRPG feel, since the player controls the whole party rather than just a single character within it.

The other thing I love about this game is the potential for upgrading and expanding it in an affordable way. Both new character class options and new quests can be packaged as individual booster packs so that you can add what you want when you want. At the same time, the mechanics are solid enough that Diceborn Heroes could release future stand-alone games that are thematically unrelated, yet still completely compatible. This is a game that has “legs” as they say in the business, meaning it has long term potential.