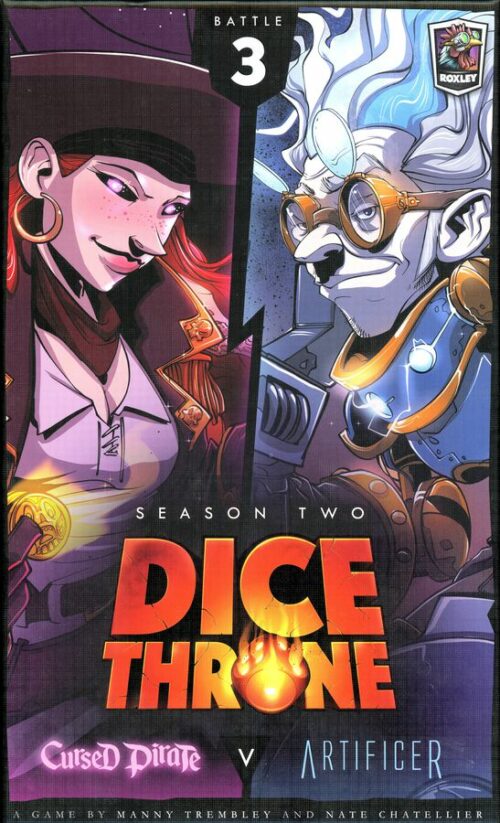 [The retail format for Dice Throne Season 2 lends itself better to a series of reviews, rather than just one. So I made a general video about it for The Watch, that you can check out HERE, plus you can read my review on Battle 1 HERE and Battle 2 HERE, and Battle 4 HERE]

“Her passions for adventure & the Seven Seas has won her riches untold. Unfortunately, her exploits have also won her a curse so dire that her life hangs in the balance. To confront the soul splitting fury of the Cursed Pirate will likely result in a one-way trip to Davey Jones’ locker.”

The Cursed Pirate is the character I’ve played the most. She presents an interesting tactical choice. She starts play with three Cursed Doubloon tokens, and at the conclusion of her turn her passive ability, Cursed, removes one. If she ever can’t remove a Doubloon her player board is flipped over for the rest of the game. When flipped to the Cursed side, she has a slightly different, and more powerful, set of abilities. However, even though she is more powerful, the Cursed ability changes to inflict 4 undefendable damage to herself each upkeep phase.

Once again we have the standard dice configuration, with a Cutlass (1-3 on the die), Booty (a treasure chest, 4-5), and a Skull (6). Several of her rolls allows her to gain Cursed Doubloons, like X Marks The Spot (3xBooty) or her defensive ability, Ahoy Matey. Shiver Me Timbers (1xCutlass, 3xSkull) actually lets her remove Cursed Doubloons if the player wants to. She always has the option to choose not to gain Doubloons.

Once Cursed, most of her damage rolls are increased by +1. As well, in most cases when she could previously inflict a Powder Keg token she now also inflicts a Whither token. Powder Keg forces the inflicted player to roll a die, on 1-2 it explodes and deals 3 damage, on a 6 it gets passed to another player. If a player ever gets a second Powder Keg, the first one immediately blows up. Whither reduces damage an inflicted player deals to an opponent by -1. Her Black Spot / Black Soul (4xSkulls) ability also inflicts Parlay, which prevents a player from dealing damage in their Offensive Roll Phase, and then is removed.

Her Ultimate Ability on the cursed side, Cursed Touch (5xSkulls) also has the somewhat-rare opportunity to affect multiple players, if you’re playing with more than two people.

“To underestimate the Artificer is to invite destruction by a cold & calculated robotic assault. His deranged love for metallic tools-of-destruction is second only to his desire to see all combatants reduced to nothing.”

In this prepackaged battle, the Cursed Pirate faces off against the Artificer. He’s probably the most complex character in the game, but in the right hands, he can also be one of the most challenging to face.

With a standard dice configuration of a Wrench (1-3), a Gear (4-5), and a Bolt (6), most of his rolls gain him a Synth token on top of whatever else the roll does. His passive ability, Scrap Collector, gives him a Synth token during his upkeep as well as allows him to spend 4 Synth to inflict a Nanite token on an opponent. During his main phase, the Artificer can also spend 2 Synth tokens to build a Basic Bot (token) and another 3 to upgrade it to an Advanced Bot (by flipping the token). He has three Bots to choose from, and the only difference between the Basic and Advanced versions is to activate their ability a Basic Bot cost 2 Synth and an Advanced Bot only costs 1 Synth.

The Nanobot can only be activated during the Upkeep Phase, detonating all Nanite tokens and dealing 1, 3, or 5, damage based on how many tokens a player was inflicted with. The Shock Bot can only be activated when attacking during the Offensive Roll Phase, and it increases the damage of an attack by +3. Lastly, the Heal Bot can be activated up to two times after being attacked for at least 6 damage. When activated the player rolls a die to either heal by 1 or 2.

When and how to spend Synth tokens is really the largest factor in winning or losing with this character. The Nanobot is a no brainer, since rolling his small straight, Jolt, and large straight, Zapppp!, inflicts Nanites for free. Plus Zapppp! and Overclock (4xBolt) both allow him to activate bots for free while ignoring normal requirements. If played right, a lucky roll could allow Artificer to use his ultimate ability, Maximum Power (5xBolt), to inflict a Nanite, deal 10 undefendable damage, and activate 2 bots. By activating Shock Bot and Nanobot he can deal a potential 18 undefendable damage in a single roll.

Both of these characters are powerhouses if played wisely, but a wrong decision with either may quickly result in your own doom.

Dice Throne now has their own website now, you can visit DiceThrone.com to order and see some cool sneak peaks at Season 3.