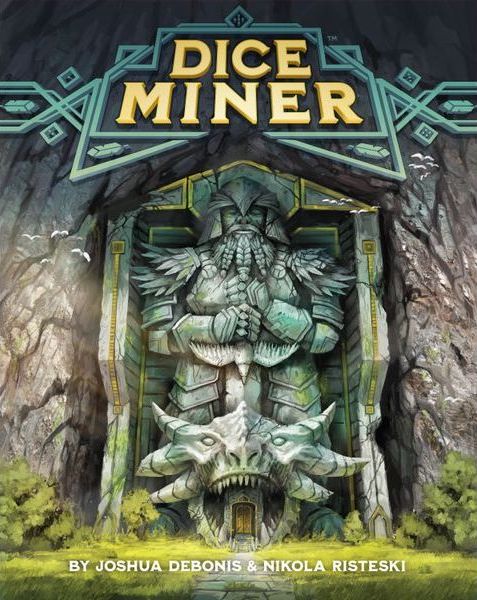 When I first saw Dice Miner of Kickstarter, I wasn’t sure what to think. I have pretty consistently loved almost everything that Atlas Games has put out for longer than I’m ready to admit. It funded almost immediately –because of course it did– and I had several indie campaigns lined up for CrowdFUNding Spotlights, so I thought nothing more of it until I got a happy email asking if I’d be interested in reviewing an advance copy of the game. Of course I would, and the timing is even better since there is a great solo mode.

Let’s start by looking at the components because that will make everything simpler; starting with the most obvious thing, The Mountain. The mountain is an angled punchboard dice tray (of sorts) that holds 20 dice on their ends to create a mountain shape. Each round you’ll shake up the bag, then pour or scoop the dice onto the mountain. In the deluxe version, you get a moulded plastic mountain and cup for the dice but I have the standard version.

There are five types of dice in the game, all of which have one face with a Beer icon (just so I don’t have to mention it every time):
-The white Tunnel Dice have 1-5 pips (just like a normal die) and are score one point for every pip that is part of a sequence starting with a 1. Meaning, 1,2,3 would be six points. 2,3,4 would be zero points because there is no 1. A single 1 still counts as a point. You can score multiple sequences but only use a die in a single sequence.

-The black Hazard Dice have three cave-in faces, and two dragon faces. Normally these are worth negative points, based on the number of dragons or cave-in icons showing.

-Green Tool Dice can change Hazard Dice from a negative score to a positive one. If the die shows a shield, ALL dragon icons score positive points. If a die shows a pickaxe and shovel, all cave-in icons score positive points. If you have multiple Tool Dice with the same icon, they multiply those points. The third possible icon is for treasure chests. You can use these dice to prevent a certain number of dice from being rerolled at the end of the round.

-Yellow treasure dice show 1-3 gems and score 1 point for each, the person with the most gems at the end of the round scores double their total gems.

-Finally, we have the blue Magic Dice. For each die, that player may choose to spend it and reroll the same number of dice as magic icons showing. They must reroll all the dice shown on a spent die, and can never reroll hazard dice.

There are 6 dwarven heroes included in the game, each of which has 2 dice icons on it that can be permanently used as if it were the applicable die. A hero with the shield icon would always score dragon hazards as if they had a Tool Die showing a shield, a hero showing a Tunnel Die with a 1 would be able to use that 1 as the first die in a sequence, and so on.

Through some good luck and good timing I was able to (safely) meet up and play a multiplayer version of the game. This was unexpected, but a ton of fun. Play happens in phases over three rounds. First players draft dice from the top of the mountain, one die at a time. If a player has previously drafted a die with a beer icon, they can first choose another player, roll the beer die, and give the resulting die to that other player. If they do this, they get to draft two dice, instead of one, from either the top or any exposed side of the mountain. Once all the dice have been drafted, players may spend their magic dice to reroll any dice (other than Hazard Dice) they drafted. The round is scored, on the included scorepad, and any dice not cached in a treasure chest is rerolled and the mountain is replenished.

The solo version of the game is similar but distinctly different than its multiplayer counterpart. They are almost two entirely separate games using the same components (Steve Jackson Games’ upcoming Random Fun Generator game, actually does include rules for an entirely different game, Liquid Courage, that uses Dice Miner’s dice.)

The solo game feels a bit like your typical thing-dropping-down mobile game. You are always able to draft one of the dice on the top of the mountain if it is a Magic, Treasure, or Tool Die, or if it is a Tunnel Die showing 1. You can only draft other Tunnel Dice if the number showing is the next one in a sequence you have already started with a 1.

Hazard dice can only be drafted if you have a Tool Die that neutralizes the icons, one die for one die (unlike the multiplayer version). Magic Dice can be removed from the game to recycle dice from the top of the mountain back into the bag. The beer icon is wild, letting the player choose what face they want when they draft it.

Twice during the game, you can refill the mountain from the bag, but only twice (mimicking the three rounds of a multiplayer game).

It’s a fairly standard try to beat your own score style game, but it plays quickly and is surprisingly addictive. It’s not going to help you learn the multiplayer rules, like with many other games, but I really did enjoy it. Honestly, I enjoyed it more than I expected I would.

I was surprised at just how much (lovingly) snarky take-that we got into with the multiplayer game and the solo game is great. On both counts, this is one of the most fun games I’ve had the chance to play in some time. I consider myself very lucky to have been able to play this, since shipping for retail and Kickstarter fulfilment has been delayed overseas for months, through absolutely no fault of Atlas Games. Let me assure you, that if you are waiting for your copy to arrive, it will be worth the wait. If you aren’t already waiting for a copy, consider calling up your Friendly Local Gaming Store, and preorder a copy if you can.

Atlas Games can be found at www.atlas-games.com or on Facebook at facebook.com/AtlasGames.