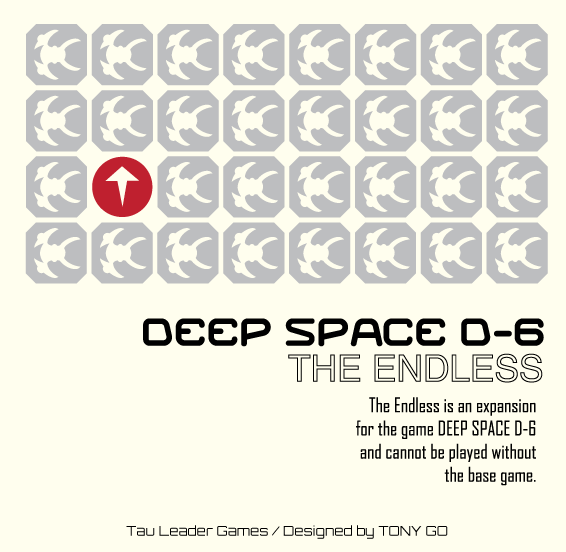 February is a month for romance, so last February I ran an entire month of two player games. March I ran a series on games you could play solo, because, after a month of playing games with your significant other, you’re probably going to end up doing a lot of things solo. I stopped running dedicated monthly themes for the most part, so I figured I should get one more use out of that gag.

Anyhow, the final game of that series has been one of my favourite solo games since it was first released and remains one of my top two. I kept my initial review of Deep Space D-6 pretty simple, just like the game, and I plan to keep this review on it’s first (of many I hope) expansion, The Endless, to be equally concise.

The Endless was released in concert with a reprint of the initial Deep Space D-6 game. The Second Edition of DSD-6 included a few minor clarifications to the rulebook and changes to the Ourobors final encounter cards. Since many of the people backing the Kickstarter would already have the first edition game, the decision was made to include the updated cards with The Endless, as well as two sheets of stickers to upgrade the first edition rulebook. The sticker sheets also include stickers for each playable ship that can be put on tokens for the Long Road Home, the DSD-6 rpg adventure that’s currently in beta release.

The expansion itself includes 6 Upgrade Cards (plus 2 tracking cubes) that can be “researched” by assigning crew dice to them, and that when completed open up more powerful ship station options. It also includes a new final encounter, with the Apex. The rest of the cards completely replace the main game’s Threat Deck with all new cards. If you want an easier game, you can add some of the Don’t Panic cards from the regular Threat Deck, because The Endless will probably end you otherwise.

The new Threats include enemies that spawn more Threat Cards, and Spores that cooperate and boost the power of each other Spore card in play. Just when you think you’ve got things under control, you get slammed and crushed.

The game was never what you could call easy, but The Endless is challenging. I have yet to win, and that seems to be a common outcome.

The Kickstarter for this was filled with technical problems, mostly on the reprint of the main game. I’m looking forward to the finalized version of The Long Road Home, and the tentative DSD-6: Armada game. Even with the delays, I won’t hesitate to back future DSD-6 releases and I’d love to see more expansions in the future.

You can download a preview Print-and-Play version of the original Deep Space D-6 at www.tauleadergames.com/deep-space-d6.

Otherwise, Tau Leader Games can be found at www.tauleadergames.com or on Facebook at facebook.com/TauLeaderGames