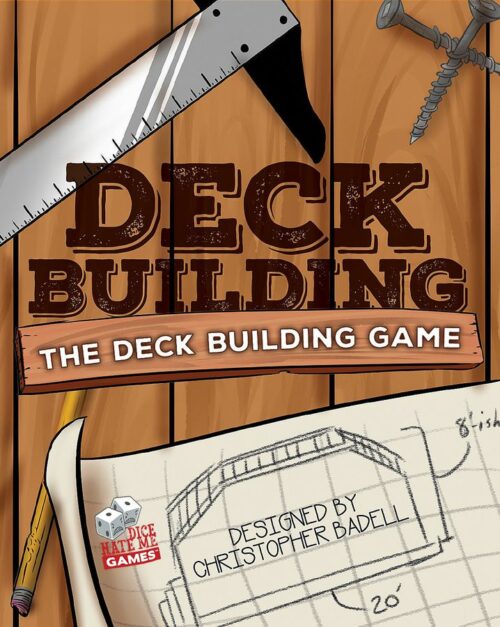 As a veteran member of the USS Bonaventure, I have a lot of experience with puns. I am just as comfortable dishing it out as I am being on the receiving end. As a matter of fact, my first reaction to any pun is usually “this is horrible, I must share this!”.

But even I don’t think I would ever go so far as to think up, design, produce, market, and publish an entire game based solely on a pun. But that’s what Dice Hate Me Games did when they created Deck Building: the deck building game. For those of you who aren’t familiar with the lingo, “deck building” is when all the players of a game start off with a small number of identical cards. As the game progresses, each player creates their own unique deck, usually through a marketplace system. In deck building games, there is as much strategy in building your deck, as there is in the actual gameplay. Of all the games I’ve reviewed so far, Heart of Crown and Covil: Dark Overlords are both perfect examples of a deck building game. There’s a question that we have to answer in this review: is Deck Building, in fact, a true deck building game?

Deck Building is a two player game, although the box blurb does point out that you can play a 4 or even a 6 player game if you buy multiple copies of the game. The concept is pretty simple: you and your opponent are rival neighbours, each trying to build a better back yard Deck. In fact, the competition is so fierce that the neighbours aren’t above a bit of sneaky sabotage.

Both players start off with 2 pine planks and 1 rotten plank. The rest of the cards, consisting of rotten planks, pine planks, cedar planks, mahogany planks, plain railings, ornate railings, and stairs, are shuffled, divided into 2 piles and placed in the center of the table. Besides the cards, there are also stain chips. By placing a chip on 1, 2 or 4 cards on your Deck, those cards are “stained wood” and are immune from any changes, from you or your opponent. But I’m getting ahead of myself.

On your turn, you can perform two actions. There are three actions to choose from, and you can perform the same action twice if you want. The first action is Purchase: every card is worth screws, and you can discard the cards in your hand for their screws, to buy new cards. The only card type that can’t be used to pay for other cards is the Stairs. Instead, if you take a Stair card from you hand and put in on the bottom of one of the two piles, you can do an extra action on your turn. Bought cards do not go into your hand, but go into your discard pile. Since you discard any unused cards at the end of your turn and draw 3 new cards, it doesn’t take long for those new cards to get shuffled into your growing deck.

The second action is Build: put one card from your hand on the table as part or your Deck (or your opponent’s Deck). Your first card can go anywhere, but after that all new cards but be vertically or horizontally adjacent to another card. Besides adding to a Deck, you can also change a deck, by covering a card. You can cover your Rotten Plank with Pine or Cedar; or you can cover your neighbour’s expensive Cedar with a Rotten Plank. There are other rules for building your Deck. If you put down a Railing card, that is now the edge of your Deck. No other cards can be placed on the other side of a Railing, and the only thing that can go beside a Railing is another Railing, or a Stair.

The last action is Stain. Once you have a section of Deck the way you like it, you can place a stain chip to protect it. You can put a chip in the center of one card, on the border between 2 cards, or on a corner to protect 4 cards. A Deck doesn’t need to be stained to be considered finished, but it can be good strategy.

The game ends one of two ways: either a player has used their entire deck to build their Deck, meaning there are no cards in their card, draw pile or discard pile; or when one of the two “purchase piles” is gone. The most complicated part of the game is scoring. The first thing you need to do is determine if both Decks are valid; for a Deck to be considered complete it must have a minimum of 2 planks and 2 railings (stairs count as railings for scoring). An incomplete Deck automatically scores zero points. A complete Deck is scored as follows. A single plank card scores its screw value. If you have a group of same type planks, you add the screw value of the cards, then multiply it by the number of cards beside each other (diagonal doesn’t count). For example, 3 pine planks count as 2 + 2 + 2 (for the cards) X 3 (for the group) for a total of 18 points. Railings follow the same rules, except that a line of railings is allowed to around a corner. Stairs aren’t worth screws, so you have the choice of having them count as a normal or ornate railing. Points can add up quickly, and even a medium sized Deck can score in the 70s.

When my friend and I played, we discovered two different strategies. In our first game, we both tried to build our biggest and best Decks; the scores were high, but I only won by a small margin. In the second game, my friend bought as few cards as possible, built the simplest Deck that was still valid, and then let her deck run out. Her score wasn’t very high, but my score was zero, so she won.

So, Deck Building is a fun little game about building a Deck. But is it a deck-building game? I’m not sure. First, there isn’t really enough cards, both in terms of quantity and variety, for each player to create a significantly different deck. Second, the main concept in deck building is choice. There is usually a large marketplace, and players must decide the best card they can buy with the points they have to spend. In Deck Building, you can only choose from 2 cards, and your choice is blind (although you can guess what you are getting based on the cost). So yes, you are building your deck while you build your Deck, but it really isn’t a significant part of the game.

For a game that is basically a playable Dad Joke, I was surprised by what I got. This is a fun, simple little game, with more replay value than I expected. Buy it, try it, play it as a fun break between more heavyweight deck-builders.

You can find Greater Than Games online at www.greaterthangames.com or on Facebook at facebook.com/GreaterThanGames.