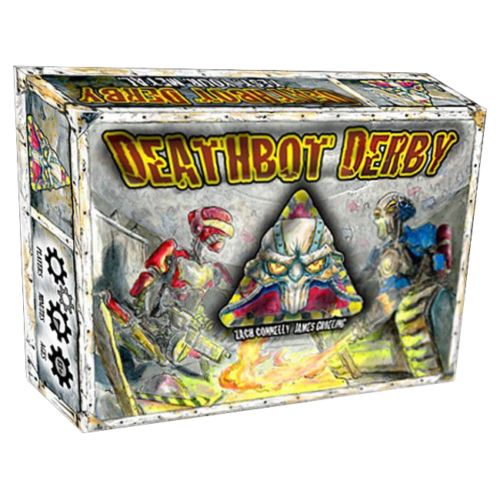 What’s the difference between a Nerd and a Geek is both a joke and a genuine philosophical question. Currently, my favourite answer goes something like this: Nerds fight in BattleBots competitions, while Geeks watch it on television. Well, thanks to a simple little cardboard box that I spotted in the sale bin of a local hobby store, finally the Geeks can get in on the mayhem too.

Deathbot Derby, by Royal N. Games, is a battle arena in a box. It has 30 arena cards, for making a unique and changeable playing area. 24 Bot Component cards, in four categories (Movement, Melee Weapon, Ranged Weapon, and Secret Weapon) let you build a custom Deathbot. Colour coded Armor cards let you count how much damage you take before your components start getting smashed. The last two cards are  Hazard Cards, with a picture of a big red button on it. These allow each player four chances per game to change the arena, hoping to get their opponent caught on a buzzsaw, bombed, or stuck behind a wall. Rounding out the contents of the box are 4 Meeple game pieces to track the Bots’ locations and a D6 die to randomize the Hazard Button events.

Creating your Bot is done with a simple card drafting system. The player “who most recently used a remote control” has the first choice of the Movement cards. Taking the top three of the six cards, they choose one card and hand over the other two to the opponent for their choice. The first choice alternates for Ranged Weapon, Melee Weapon, and Secret Weapon categories. Only after all decisions are made do players reveal their cards (except the Secret Weapon of course).

Once the Bots have been “built”, it’s time for a Battle. Starting from opposite corners, players move their Meeple tokens across the arena, attacking whenever they are in range. The distance a bot can travel in one turn, and the range of the attacks, are written right on the Component cards. Both movement and attacks are in orthogonal directions (up, down, left, right) unless a card specifically says a Bot can move or attack diagonally. A player can perform two actions in one turn (move and attack, attack then move, move twice or attack twice). Once per game, a bot can use its Secret Weapon as a free action, and the Hazard Button can be used a maximum of four times by each player.

Damage is dealt to Armor first, and only after Armor is brought down to zero are the Bot Components in danger. The attacker, not the defender, chooses where all damage points go. Repairs are possible, so disabled Armor and Components aren’t necessarily lost forever. If Armor and all Components are brought down to zero, then the Bot is Scrap and the Battle ends. As an alternative to the standard one on one game, there is also a four-player Team Battle. Each team has two players, the Leader and Mate, each with their own Bot. Turn order goes Leader A, Leader B, Team Mate A, Team Mate B. Teams keep playing until both Bots are scrapped. During gameplay, a scrapped Bot has a Movement of 1 and can do 1 point of melee damage, but is not allowed to use its Secret Weapon or be repaired.

There are enough random elements to keep things interesting, and enough strategy to make it a challenge. It’s a quick, simple game, with a high replay factor. There are a couple of things that keep this game from being perfect. It doesn’t say anywhere in the rule book whether or not a Bot can Dodge an incoming attack by moving out of range. This is a serious omission, and I wasn’t able to find an answer online either. After discussing this review with another gamer, he suggested adding a House Rule that if a Bot does not use their complete movement on their turn, they can use whatever movement points are left to defend itself.

The arena cards are easily bent, meaning the more often the game is played, the more difficult it might be to move your Meeples around. At first, I thought it might be a good idea to place a piece of clear glass or plastic over the arena, but you still need to be able to flip over cards during the game. My playtester suggested using card sleeves instead.

You can find Royal N. Games on Facebook at facebook.com/royalngames.