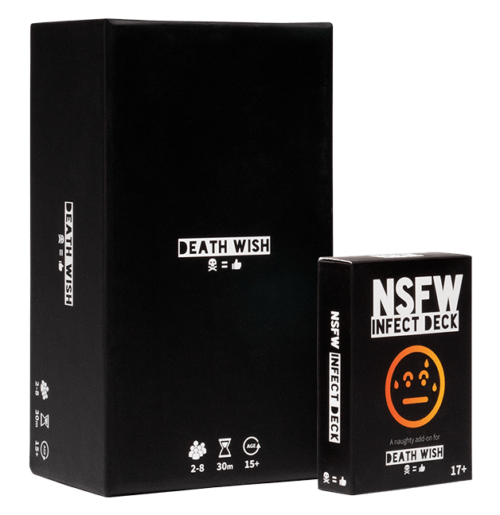 Convention season. With it comes cosplays, creatures, comics, and celebrity guests. (It’s still a “C”, it counts as alliteration!) But the other “C” thing it brings, is what is less-than-affectionately known as Con Crud. Con Crud is that mystery disease that EVERYONE seems to leave a convention with. No one wants Con Crud, unless you’re playing Death Wish in which case you want to catch that and every other possible disease you can until they kill you. Finally, a game that capitalizes on both the pro-curable disease market and the millennial urge to end it all.

Snark aside… no… there is no aside, this game is full of snark and it’s glorious. I’ll come back to that, but let’s talk about gameplay for a minute.

Death Wish is a card game for 2-8 players, although it definitely plays better with at least four. The setup seems complicated at first, but it really isn’t. Separate the cards into their four respective types, Symptoms, Diseases, Afflicters, and Outbreaks. Deal four facedown Symptoms to each player, then four more, face up, into the middle of the table next to the remaining deck (the Symptom Pool). Deal two faceup Afflicters to each player, and one face up next that deck. Deal four faceup Diseases to the right of Disease deck (the Disease Pool), put the Outbreak deck at the end of those cards, then add one more Disease to the left of the Disease deck (Incubation).

On a player’s turn, they can take one of four actions:

-They can Suffer Symptoms and collect up to two Symptoms from either the faceup Symptom Pool or the facedown Symptom Deck.

-They can Become Afflicted by taking the top faceup (Open) Afflicter card, or draw two cards from the facedown Afflicter deck, keeping one and placing the other on top of the faceup Open Afflicter pile.

-They can Spread A Disease by taking the Incubation Disease from the left of the Disease Deck and covering one of the cards in the Disease Pool, temporarily blocking it from being taken for points.

-Finally, they can Contract A Disease and collect points.

To Contract A Disease, a player needs an Afflicter card and the number of Symptom cards listed on the Disease. Except in the case of Wild Cards, the Symptoms and Afflicter must match the colour of the Disease. If the Disease has and Outbreak icon on it, that player also draws, and immediately resolves, a card from the Outbreak deck.

Play continues until someone collects the agreed upon number of skulls from the Diseases they contract.

Having “good taste” is not a bonus for this game. There are a lot of dick jokes and scatological humour, so just set that expectation and enjoy yourself. The Disease cards are all pretty hilarious, Man Flu is probably the closest to a real thing, but there are others like Mad Owl Disease, Snarkolepsy Moolaria, and LOLera. (My spell-checker is pulling out its virtual hair right now.) Symptom cards are no “better” with simple things like a Bloated Ego or Poor Life Choices, to absurd things like See Dead People or a Bad Dating Record, to the inevitably foreshadowed Radioactive Poop. The Afflicters go from realistic things like Stroked A Stray Cat and Drank Off Milk, and ramp up to the ridiculous Licked By A Unicorn and Seduced By A Mermaid.

The only real issue we had while playing was from some of the Outbreak cards. There was confusion at a few points over them, but some of that may well have just been some pre-con-crud brain kicking in.

It’s not uncommon for me to have a player or two show interest in buying a copy of whatever game we’re playing for an upcoming review. But I’m not sure I’ve ever had the entire table saying they need this game in their life. That reaction alone says more than anything I could write here.

I really had to wonder how you NSFW up a game that already includes symptoms like Kinky Thoughts, Attraction To Donkeys, and Rectal Bleeding. In hindsight, I’m still not sure I wanted to know that answer.

The description of NSFW Infect Deck is “A very rude, Kickstarter backer-contributed add-on…” That sort of explains a lot actually. Some of the new Diseases are pretty awesome, I very much appreciated Pregnancy being classified as a disease. Although I didn’t really find many of the Symptoms to be as witty as core set, and I just found some of the Afflicters a bit distasteful.

There are obviously people who may find this add-on amazing, I’m certain there will be people who think it goes too far. There is a place for both types of people at the game table, and there’s a decent chance they won’t find themselves at the same game table anyway.

If you think you’ll enjoy it, totally get it. Worst case scenario, the whole deck (tuck box and all) fits in the core box, so you can use the ones you like and keep the ones you don’t like separate.

You can find more about Death Wish online (including a scaled down Print-and-Play version and “Official” Unofficial Drinking Rules!) atwww.deathwishgame.com or on Facebook at facebook.com/pg/deathwishgame.

You can find the designers, Sketchy Games, online at sketchygames.co.uk and the publishers, Zafty Games online at zaftygames.com or on Facebook at facebook.com/bezafty.