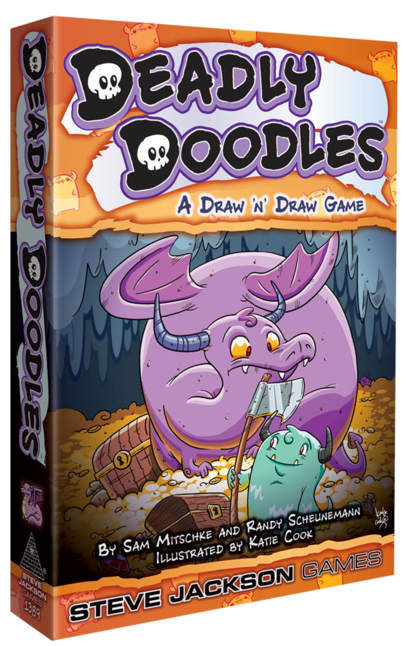 I don’t mind admitting that I was a bit hesitant when I received Deadly Doodles. It has a very cartoonish cover, an age rating of 8+, and “doodle” in the name. These were very book-by-its-cover sort of judgments, but to deny it would do a disservice to you, my readers, and not mentioning it at all, would also lessen what I’m about to say. It’s a really fun game.

Here’s how it works. Shuffle up all 36 cards and reveal the top four of them. Each player then uses the included dry-erase marker to draw a path on their individual map using all four cards. A path must start at an entrance point, and from their must either continue from a previous path or start at another entry point. Crazy easy, right? You’d think so, but it’s not.

There are some obvious restrictions, like not running a path into a wall. But the real trick is the scoring. You get +1 for any unused entrance points, +2 for any space your path intersects with that has Loot in it, and +1 for any Weapons you collect. You get +4 for any Monsters you encounter, but only if you can slay them with the matching Weapon. If you aren’t able to collect the right Weapon, that Monster is instead worth a -2 penalty. You also get a -2 penalty if you can’t legally use a card that was revealed, and -3 for any traps you encounter.

Here’s the thing about Traps. When a trap card is revealed, you’ll mark an X on your own board in an empty space. At the end of the game, each player reveals where they laid their trap, and if your path crossed that room, you take the -3, however, if two players set a trap in the same place they cancel each other out. This can be a fun mechanic, but it’s the one part of the game that can also be exploited. It’s not hard to look up at your opponent’s map and set the trap somewhere you know they have been, and you probably won’t go. In a four-player game this might not be so bad, but in a two-player game it feels odd without some sort of screen to hide behind.

Aside from the Trap cards, there isn’t any player-to-player interaction. But it’s a short enough game that it’s not a huge problem. The upside is that it makes the solo-mode play almost identically. Just remove the Trap cards and play. There’s no scale for what a “good” score is, so you’ll just have keep track of how you did.

For what this game is, it’s a nice little filler for adults and just a fun game for younger players. The one opportunity I think was missed was the map. The trap mechanic makes the need for identical maps a thing, I get that. But they could have easily put a second board on the back, or four different maps, intended for solo play, just to add something to the replayability.

Before I close this review out, let’s talk briefly about the care and feeding of your Deadly Doodles game. If you’ve ever used a whiteboard, you’ve probably noticed that it rarely comes completely clean with just an eraser. So while the erasers on the markers are fine between games that day, you should take a barely damp cloth and wipe the boards down before you put the game away. Don’t use a really wet cloth because, while the surface is coated to be water-resistant, the sides are still unsealed cardboard and are not at all water-resistant. That little bit of TLC will keep your dungeon looking pristine for game nights down the road.

UPDATE: After this review was written, Steve Jackson Games posted that a Deadly Doodles expansion is in the works, so those “missed opportunities” may not be missed for long.

You can find Steve Jackson Games online at www.sjgames.com or on Facebook at facebook.com/sjgames.