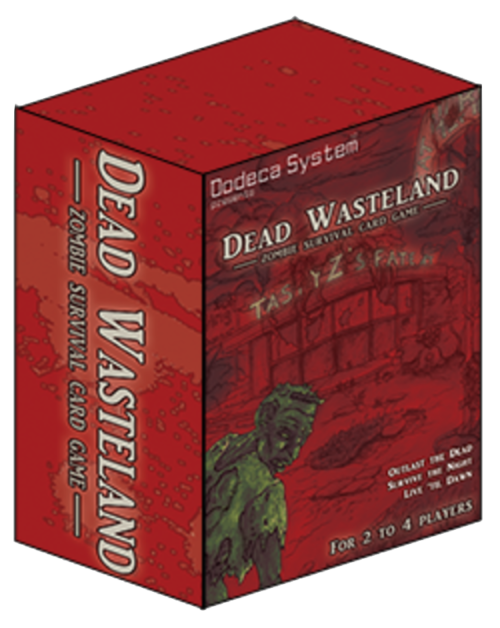 Part of the magic of tabletop gaming is that almost anything can fit on a table, or in your pocket. Ninjas? Sure. Pirates? Why not? Squirrels? Go for it. A Court of Imperial Princesses? Bag it up. But an entire Zombie Apocalypse? That’s got to be an RPG, right? Isn’t that Brent’s territory? Nope!

Dead Wasteland by Dodeca System is a zombie survival card game for two to four players, and yes, the whole thing can fit in your pocket. The story for this game is pretty brutal:

“It’s been fifty years since the war that ended the world, since the dead came back to life and started feeding on the living. Now, humanity has to scrounge the wastelands, looking for the supplies they need to survive. It’s not about rebuilding civilization anymore — now it’s everyone for themselves as the survivors find the items they need to live in the Dead Wasteland.”

There are only two ways to win Dead Wasteland. You can either collect the three things that every survivor needs to live another day: Food, Water and a Flashlight. Or, you can kill at least 15 zombies before dying yourself. And in this game, dying is easy. So easy that they have set up a “respawn” system. If one player dies, they lose all their cards, and restart as another survivor. But if everyone dies, the game is over. But I’m getting ahead of myself.

There are four different card types in Dead Wasteland: The Dead, Ammunition, Items, and Instants. The Dead cards are the ones you don’t want to see, but you will see them way too often. The amount of ammunition needed to kill a zombie is marked on the card as red target symbols (bullets) and green zombie heads (headshots). A Lone Zombie can be killed by two bullets, or one headshot. A Two-Fer needs 4 bullets or 2 headshots. The dreaded Three Pack needs 6(!) bullets, or three headshots. Even a wounded zombie can kill you if you run out of ammo, and then move on to the next player.

Ammunition: Bullets and Headshots, are what keep you alive. You start the game with two bullets and one headshot in front of you, as well as the 5 cards in your hand. Use your ammo carefully, because you can only reload once per turn. Depending on the level of difficulty you choose, you may even end up with a limit on the ammunition you can carry.

Item cards include those three coveted survival items, Food, Water and Flashlights. But there are also other useful things: Melee Weapons, Backpacks, and Gun Belts. As long as you have a melee weapon in front of you, you can do a point of damage to every zombie who is attacking you. The backpack and gun belt are useful at higher difficulty levels, because they increase the maximum number of items and ammunition you can carry.

Because there are no friends in the Wasteland, Instants are the cards you use to mess up your opponents. Unlike the other types of cards, you can play an instant at any time, even when it isn’t your turn. You can steal, or destroy, another player’s item; distract the zombie horde; even resurrect a dead zombie and send it after an opponent. No mercy.

As I have already mentioned, you can choose at the beginning of the game what difficulty level you want to play. Spring is described as “when the survivors are feeling refreshed, and the zombies are still half-frozen”. In spring, there is no limit to your hand size, items or ammunition; and the size of the attacking zombie hordes tops out at three. Fall is described as “when the survivors are starting to tire and the zombies are defrosted and ready to fight”. At this level, your hand size is 5 cards, your ammunition limit is 10, and you can only have 3 items in front of you. There is no limit to the number of zombies that can attack together. Winter is the hardest level when “the cold is hard on the survivors, but the zombies haven’t yet begun to feel it”. There are no limits to the zombie horde, but your hand size is 5 cards, the maximum number of items is 3, and your ammunition limit is 6.

The most complicated part of Dead Wasteland is the actual gameplay, but once you get into a rhythm, things run pretty smoothly. Every turn goes through multiple stages, and certain actions can only happen during specific stages. What surprised me the most is that there is no mention anywhere of how to determine who plays first. It isn’t even a matter of “choose any method you want”. First player is not mentioned at all. During set up, each player gets their starting ammunition and a hand of five cards. If there are any zombies in a player’s hand, they are discarded, until every player’s hand has 5 non-zombie cards.

A player’s turn consists of 5 phases: the Zombie Horde, the Reload Phase, the Item Phase, the Scavenger Phase, and the Discard. For the Zombie Horde, you draw a card off the top of the deck. If it is an Item, Instant or Ammunition, great! There is no Zombie attack. But if you get a zombie, you must continue to draw cards until you get a non-zombie card. Lay all of the zombie cards on the table; they all immediately attack you! You must try to destroy the Horde using the Ammunition (and Melee weapons if you are lucky) that are in play in front of you, not the cards in your hand. If you kill all the zombies, you continue to the next phase. If you can’t kill the Horde, you die immediately and any remaining zombies start to attack the next player.

Once all the zombies are dead, whichever player killed the last zombie goes on to the Reload Phase, laying down any Ammunition they have in their hand. In the Item Phase, you can lay down one Item in front of you. In the Scavenger Phase, you draw up to three cards, from the deck, the cemetery, or both. Now would be a good time to mention that this game has two discard piles. Cards that are used in the game go in the Garbage pile. Cards that are discarded unused, either voluntarily or because a player died, go in the Cemetery pile. Only the cemetery can be scavenged. If any of the scavenged cards are zombies, they must be killed, but unlike the Horde, they don’t force you to draw more cards. After Scavenging, you can discard into the cemetery pile, either to bring your hand down to 5 cards or simply because you don’t want the card. Instants can be played during any phase.

This is a survival game, but there are many survivors in the wasteland. So as long as even one player is alive, any dead players respawn as a new character, with their starting Ammunition and a new five card hand. But if everyone dies, the game ends with no winner. Remember, the only way to win is by collecting those three survival items, or by killing 15 zombies. But you lose your items and reset your kill count every time you die.
This is definitely not an easy game. You will die, and often. But that doesn’t mean you aren’t having fun. There is surprisingly little frustration, even when the hordes are winning. And even if everyone dies a horrible death, you can always reshuffle the deck and start a new game.

You can find Dodeca System Games online at www.dodecasystem.com or on Facebook at facebook.com/DodecaSystem.